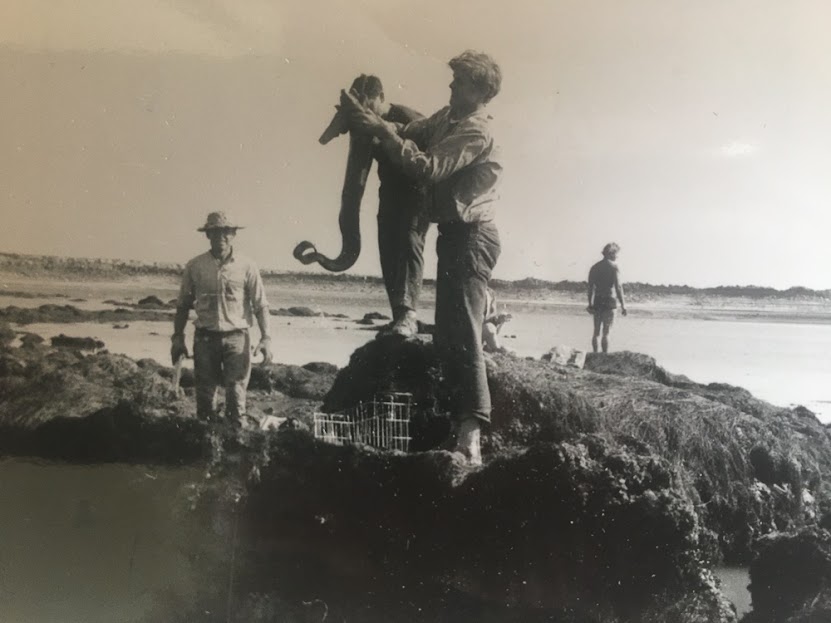 My great friend Jeff Barney sent me this picture of himself as a young man the other day. A few years older than I am, Jeff grew up in Monarch Bay. Jeff is the tall guy in the foreground. His best friend, the late Scott Nesbit, is behind him.

He was pulling up a moray eel in the picture. The man in the hat behind him is a legendary waterman, Lorrin Harrison (1913-1993.) Jeff said that he and Lorrin aka "Whitey" got gunny sacks of lobster that day. Jeff did a lot of canoeing with Whitey. He told me that Whitey was an incredible swimmer and diver, he would often grab sixty lbs. of lead and drop straight down to the bottom to catch his abalone and lobster.

Harrison was one of the most famous and accomplished of watermen. Groundbreaking, I think. He stowed away on cruise ships in the 1930's so that he could surf the big waves in Hawaii. He was one of the first Californians to surf Waikiki and one of the first surfers ever to surf the legendary North Shore of Oahu.  He traveled to Laguna Beach from his native Garden Grove in a horse and wagon. He won the 1933 Pacific Coast Surf Riding Championships and was reportedly one of the first people ever to surf San Onofre.

He was a long time life guard as well as a lobster and abalone diver. My friend Bob Booth, the father of noted Pro surfer Jeff Booth, was also a long time Orange County lifeguard. He said that Whitey would catch the most outside wave at Killer Dana and ride it all the way in tandem on his legendary blue board. Said Whitey would only show up to surf when it got really big. He told me that even as an old man, Harrison didn't have an ounce of body fat on him.

He was one of the first board builders. Somehow Jeff Barney ended up with Whitey's famous board when he was a kid and he says that it was not really blue but was actually ice green. He accidentally destroyed it in a cavalcade of errors after borrowing it and then getting stopped by a policeman and crashing and then finally finishing the job by letting a friend convince him to turn it into a shorter board. Pissed Whitey off I think.

Anyway, Jeff sent me the picture above and it is so classic I had to share it with you. Jeff hung around a lot of the old timers. James Arness, Sizemore, Hobie and many others. Has a lot of stories.

I have known a lot of older retired lifeguards from the early days. My old friend and neighbor Gib Lee was an early Hermosa Beach lifeguard, did it for 33 years, watched Greg Noll and Dewey Weber grow up at the beach. Southern California must have been wonderful back then and it also must have been great to meet men like Whitey.

That is a truly awesome story. I love the photo and wondered, "What is that guy holding?" You had me at "Gunnysacks of Lobster". Greetings from Eleuthera, The Bahamas. Loving the blog lately.

Lovely, I met Whitey a couple of times; sat with him out in front of his San Juan Cap. abode.
His eyes seemed to evoke horizons.
Thanks for the good read.

In the 80’s I got a call from SURFER Magazine that a SF advertising agency was looking for an elderly surfer for a TV commercial so they gave them my #. Two minutes later my phone rang. The guy said they wanted an older surfer for a commercial, I said great! That’s what I do, place surfers in commercials. I charge $500. per placement.. He said OK. I gave them Lorrin’s #. Lorrin did a National commercial for Amour All, Cecilia his wife thanked me for years. She said Lorrin loved it!

Thanks Alan.I am really surprised you don't know Jeff Barney, since you guys are from the same area. I thinik I put you both on the phone once. There is another guy from your area now in Fallbrook named Tito who went to school with Jeff.

Hi Robert, nice tribute to Whitey...very cool. I knew him quite well. Truly was a classic waterman.He spent a lot of his childhood in the Santa Ana Canyon near Olive where I grew up. We talked a lot about our experiences there. His wife was from the Yorba family who lived in the Olive and Canyon region and once owned the whole canyon to Corona and a lot of Orange County. That Adobe house they lived in near Doheny Beach was a real old structure built by her family. Across the drive from the front door was a stack of abalone shells about 4 feet high! The Fly (Lorne Harrison's son in law) had a surfboard glassing shop in Harrison's barn. I still occasionally ride a big wave surfboard he shaped and glassed for me to be used mostly in Northern California in winter. Real nice people to have known and spent time with. G

Was reading about Olive and the Yorbas. What a fascinating part of California history!
I knew nothing about it. Thanks, Gordon.