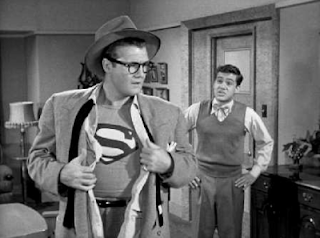 Nerdy, comic book types might want to take a look at this article from Wired Magazine, THE WAY SUPERMAN PICKS UP A BUILDING IS A PHYSICS TRAVESTY by Rhett Allain.

The author really breaks it down and shows why according to him, the physics of Superman's little move the building escapade is all wrong. Superman keeps the building remarkably level, I will say. Here's Rhett:

...with this mass, I can calculate the gravitational force pulling down by multiplying by the gravitational field (g = 9.8 N/kg). This means that Superman has to push up with a force of around 30 million newtons. Yes. That is a very large force, but hey—it's Superman. That's why he has "super" right there in his name.
Now that I have the force that Superman pushes up on the building, I can also calculate the pressure. The only thing I need is an estimate of the contact size of his hands. Let's just assume Superman has large hands. Maybe the contact area for each hand is a square 15 centimeters on a side. This would put the total contact area at 0.045 square meters. Using this and the force, I get a contact pressure of 670 megapascals (MPa). Yes, that is HUGE pressure.
It turns out that certain materials can only handle a pressure up to some maximum value. This value is called the compression strength. If you go past the compression strength pressure value, the material fails—it either breaks or falls apart or something else bad happens. Bricks have a compressive strength of just 80 MPa—they would be crushed by Superman. Granite has a compressive strength of 130 MPa. Even steel would probably fail.

Material failure. He has a point. I was an architecture student in college and this dredges back all sorts of dark thoughts about moments and elasticity. I sent the article to some of the smartest people I know, including the man with the M.I.T. trained quantum physics doctorate. He sent me back this:


Feh.  The wired author lacks imagination. The article is based in conventional Newtonian physics, completely ignoring quantum and relativistic effects that totally change the game.  If superman can fly, why isn’t it possible superman can also control/affect the mass of the building, thus avoiding all of the conventional physics concerns the author raises.  If you have super-ability to screw with stuff, who’s to say you can’t be messing with stuff at the quantum/relativistic level?
With a simplistic Newtonian view of the word, many basic electronic components (e.g., the tunnel diode) are every bit as bothersome as the fictional superman… yet they are real.

I am with the PHD, I hate when my friends go all simple and Newtonian on me. I was of course, way out of my depth but sent him this retort anyway, not wanting to appear like an unschooled rube:


My thought was that he had to be super prescient to nail the perfect balance point and not get any teeter tottering or precession. But the author has a point, there are unsupported parts of the buildings that would collapse like a cupcake , no matter what force he applies to the bottom of the structure. 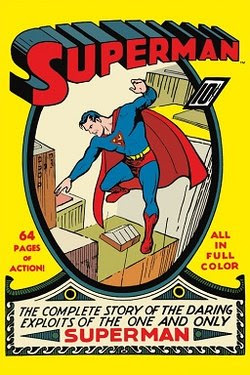 Certainly not my greatest effort but it has already been sent, so what the heck. Out of my hands. The physics conundrum that always astounded me about the Krypton native was that he had to grunt a little to bend a mere steel bar in half and yet could push a large planet out of the way of an incoming comet like it was sliced bread. An equivalence problem, I guess. And where in the heck did he stash Clark's glasses anyway?
Posted by Blue Heron at 2:43 PM

You are making a false assumption, like assuming MadMaxine Watters has a brain.
You are taking Superman's 'powers' and analysing them as a mere mortal. His powers
are super...as in none of your business, oh Blue Heron breath.

Here is the answer...


When he first débuted in Action Comics #1 way back in 1938, Superman couldn't fly at all — instead, he could jump the wonderfully specific height of 1/8th of a mile. His ability to fly would first appear in Superman cartoons and Radio plays, before he picked it up in the comics for the first time in 1941.

He makes a good point. But nits are being harvested throughout the monograph.