I am trying to pretend that I am a normal human being and less of a pathetic loser so I am trying to engage in normal human being stuff. Actually had a guy help me in the yard on Monday, first time in about eight months. Weeds were near head high, neighbors starting to give us the look. I feel a lot better when the yard is looking spiffier, just haven't had any energy with the heart crap. Or money for such extravagances as help.

And I got myself a new windshield. Money be damned, couldn't see through the old one anymore. Cracked and scratched. Hail storm in New Mexico did me in. My onetime young hippie cool has turned into primitive old caveman frigid. May be headed for a fall but at least I will now have a clearer view of the event.

Leslie and I drove to Los Angeles yesterday, listened to as much of the Michael Cohen show as we could stand on the way. I dropped off a painting in Beverly Hills, then we hit Canters.

Do you remember last September, I was bitching about a particularly bad lox and whitefish plate? Maybe miserly is a better term.

I wrote the Canters a nice letter, a little hurt but not angry, broke down the essence of my critique and Dena wrote me back and told me to call Mrs. Canter. I did and she was very nice, said that the next meal was on them. Whoo hoo!

They came though in spades and we got our favorite server to boot, Greg. Greg has been there for thirty five years. Everything was perfect, pickles were great and we had a reuben to boot. Life is good. 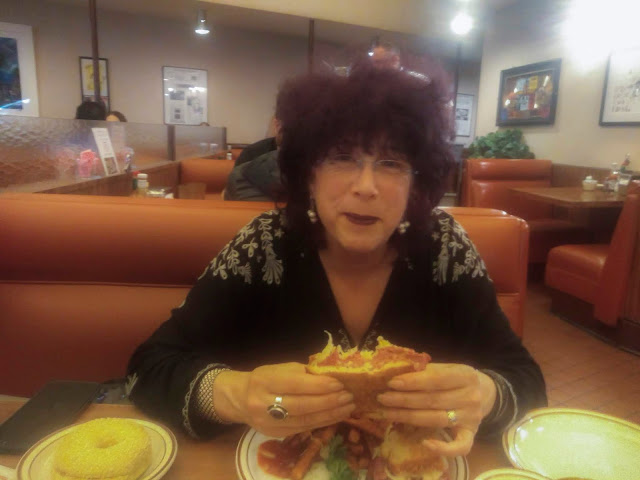 Happy wife, happy life. Thank you Canters. You are all very menschy and we appreciate it. That is why we keep coming back. If it is not right and it is right 99 % of the time, they make it right.

Stopped by George Stern Fine Arts and saw George and his lovely wife Irene and picked up some canvasses for Gary. I was right there, would save him a trip. A zillion dollars in the back of my van. Then we headed to the garment district and picked up shmattas for Leslie's clothing store on 12th street.

My mother was a native angeleno. Both my parents were Bruin alumni. I know some great people from L.A., people like Roger Genser, Marty, Linda, Isak, Sue, Joseph and George, many others. But I must confess to not really liking the city. There is an oppressive pallor of native hipness and superiority that I find completely unfounded. New York I will buy, Los Angeles, I don't think so. And no, it's not because I hated my mother. Just don't resonate with the place, except for some lovely hideouts, like Canters, Griffith Park and Philippes. Truth be told, we come for the whitefish.

But I do like the rules that Los Angelenos have created to make their mostly miserable lives bearable, like the three car exception at the red light. Very sensible.
Posted by Blue Heron at 4:51 PM

it's more like a labyrinth of palm trees with corners
hiding from the masses who daily prey upon it's coffers......

Currently down town as I write this... interesting place!

Paul's chinese restaurant on 6th and Hill St between the garment district and the jewelry mart has incredible food. The best war wonton soup ever! Getcha some!