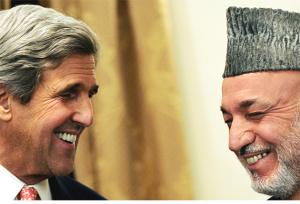 “It would be entirely irresponsible for the president of the United States to commit more troops to this country, when we don’t even have an election finished and know who the president is and what kind of government we’re working with.’’ John Kerry

I got a chuckle from the Wall Street Journal today. Karl Rove brings up Obama administration "wobbling" on Afghanistan. He throws a few jabs at the President, but it's sissy stuff and more for the sake of exercise than anything else.

Rove says that we risk alienating Hamid Karzai, the long time Bush proxy in Afghanistan. Karzai has presided over a government rife with corruption, with both his younger brother Achmed Wali and his Defense Minister rumored to be deeply involved in opium trafficking. Never mind that the guy is dirty, he's our boy, right Karl? Afghani opium kills more people per year, over 100,000, than any other drug according to a new U.N. study. Estimations are that over 125 million dollars have been raised for the taliban in the last three years through the opium and heroin trade.  As we have seen in Mexico, when there is this kind of money floating around, much of the government is usually involved.

Of course, the Republicans have a time honored tradition of cozying up to dictators and crooked strong men that reaches back to Batista and United Fruit. And perfected at the hands of the nimble master Henry K. who only respected democracy so far when it came to Chile.

Neutral observers have castigated the recent election in Afghanistan as being one of the most "fixed" affairs in recent memory (with over a million "disputed" votes) and Karzai has reluctantly agreed to a revote. John Kerry reportedly had a frank discussion with him about straightening up and agreeing to new elections.

Our whole position in the region has been a joke. As mentioned previously in this blog, over 6 billion dollars in our aid to Pakistan never reached their target destination. There are reports that the Pakistani military are financing the Taliban with our money. Drug trafficking goes unabated. The Afghani military is completely ineffectual. Karzai is shown to be a crook. Before we know it, we are in a modern Viet Nam. Does anyone actually think about Bin Laden these days? Are we any closer to catching him and the bastards responsible for 9-11?

General McCrystal wants more troops and an escalation in Afghanistan. Biden says not so fast. Arianna Huffington wants Biden to resign for his insubordination. More likely he's playing a boss sanctioned game of good cop, bad cop with these guys.

With friends like we got in the middle east, who needs enemies? We are trying to shoehorn western civilization into a tribal region where enmity and barbarity have ruled for over a thousand years. Where the natives don't seem to want to invest anything in their own freedom, merely to suck on the tit and blood offerings of Uncle Sam. Let's get out and start looking at fixing places like Gary, Indiana and Salinas before we try to fix the problems of these two bit thieves. I hope that Karzai gets his clock cleaned and the people of Afghanistan get a chance to start over.
Posted by Blue Heron at 7:58 PM

Cheney, the once and former VP, is accusing Obama of "dithering" (his word) on Afghanistan. What did Dick-less and Dubya do for 7 years??? If that was not dithering, I don't know what dithering is. Interestingly, "dither" is the same word that neo-con John Bolton used in an op-ed to describe what Obama is doing.

I wish those two guys, Cheney and Bolton, would take a ride in that flying saucer we saw cruising through the Colorado sky last week. Maybe they wouldn't come back!!!

at least you gotta dig that hat that Karzai wears...