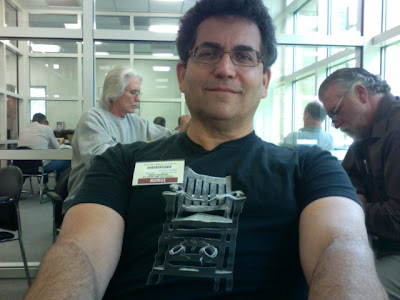 I am in the jury room at Vista Superior Court.  The electric chair t-shirt I have worn today has not yet done the trick and had me thrown out on my keister. Listened to the judge give the normal semi impassioned speech on honor, duty and the american way, with even a passage from To Kill a Mockingbird thrown in.

The ace wordsmith William Safire died last week, he who first coined the phrase nattering nabobs of negativism for Spiro Agnew as a Nixon speechwriter. He wrote the finest column ever on the english language for the New York Times Sunday Magazine. I thought of him twice this morning, once when the judge used the phrase manned and womanned (sic) which I am not sure is quite kosher. The woman who followed him talked about people who had been summonsed instead of summoned. This does not bring up the dreaded red line on my word processor but still sounds a bit cumbersome.

Spilled a coffee cup on my jeans on the ride in. Couldn't drive, drink and play poker on my blackberry at the same time. Tough to multitask in my dotage.

Saw my buddy and Blast reader Keith's wife Sue here. Really nice lady - they just came back from the turn of the leaves in New England.

Leslie and I went to Dixon and Connie's for dinner last night. My wife and Dixon made the dinner, Connie made dessert, I am culinary challenged and sat on my ass and just ate.  Leslie's friend Paula harvests her own chemical, hormone free chickens and they cooked one of them up, after plucking a few errant feathers. A bit muscular but she evidently ran around and led the optimal chicken life. Connie made gluten free brownies which were amazing. Persimmon, pear salad courtesy of the wife.

I have been thinking of the way that people are divided this week.  The first maginot line was college football - men either like it or don't - I can't stand it. More on that later. Connie says the world is divided by people who either fold or crumple their toilet paper. (Folder). I have often thought that people can be segregated by if they would look better clothed or disrobed.  Kind of hard to tell sometimes, this one can throw you.

I caught a ration of shit from Kerry yesterday for my short story's latest installment.  He said something about my overuse of  every cliche in the book. Compared it to Mickey Spillane.  I love Mickey Spillane. And Damon Runyan. And Gibson and Dick and Neal Stevenson. He wants me to write in my normal sarcastic voice.  I don't see that as a challenge. That comes too easy. So I will keep plucking away.

Kerry also said that Death Valley might not be on our agenda this week.  The expected light rain turned into 60 to 70 mile per hour winds yesterday. Even if I do get out of jury duty. I spent yesterday prepping for a tax meeting with my accountant on Friday.  And I couldn't put a finger on a lot of information. Spent two hours on the automated phone system of Bank of America trying to get tax and impound information.  Incredibly frustrating. So I may have to put the trip off. Or say screw it and go anyway.

Watched part of the Ken Burns National Parks series yesterday at Connie's and realized how much I miss Glacier, probably my favorite National Park, and how much debt we owe Mather for establishing the Park Service and funding much of it out of his own pocket. Great black and white lightening shot on the Grand Canyon in the show. Once saw a tree with 13 bald eagles on it in Kootenai.

Going on 20 years tv free, I am realizing how divorced I am from true American culture. Not only are we not hip to Jon and Kate, I must confess to never watching a Seinfeld. Ruined my chances as a potential Jeopardy contestant. But have to admit that their HD was pretty cool.

Not having a television, my interest in sports has really abated over time. I played soccer, baseball, cross country and basketball in school and did Kung Fu for many years. Was a White Sox fan with Aparicio and then a Big Red Machine fan following my favorite player Tony Perez in the seventies. Padres fan ever since. But it is different when you follow the team the next day in the newspaper as opposed to watching games live or on the television.

Here in San Diego we have had an ownership change. Sports agent Jeff Moorad has bought the baseball team, although he appears to not have enough money to actually pay for it yet. Yesterday he lopped off our Padre General Manager Kevin Towers's head.  This is unfortunate because Towers was a riverboat gambler who always made the best of a bad situation with crummy ownership. We have suffered through some lulu owners since the great Joan Kroc died. Carpetbaggers like Tom Werner and John Moores. A guy who managed to evade an indictment that sent all his underlings up the river.  But finally got nailed by his wife who is in the process of divorcing him.

So Moorad walks in and crudely foists his imprimatur on the team. Most Padre fans applaud Towers for the work he did with a paltry 40 million dollar payroll.  Baseball is a joke compared to football which at least has revenue sharing. This is the reason I hate the Yankees and Red Sox and especially the hated Dodgers and all the other teams that think they can buy a pennant. I am sure that it hurt Towers to get rid of Peavy and all the other stars but he never openly bitched. Hope he lands on his feet.

No desire to watch pro football.  Our owner Alex Spanos drops more money on the Republican Party than any other owner.  Conned the city into paying for an expensive multimillion dollar stadium expansion and than immediately demanded a new stadium. One that has expensive luxury boxes for the fatcat corporate clients. I do not want to give these guys a penny. Mark Fabiani, who used to be a democrat, is their shark lobbyist.  You can always tell he is lying because his lips are moving.

Oh and speaking of having liberties with the english language, the local sports radio guy Darren Smith  talked about Tower's tenureship this morning. Just make them up as you go along, folks.

Well the wheels of justice are turning and three cases are trailing. My unbiased opinion is getting ready to fry some poor sucker. Too bad for them that I am in a pissy mood. Off with their heads.
Posted by Blue Heron at 10:34 AM