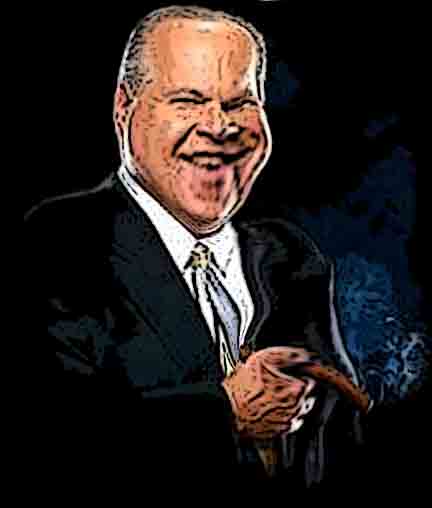 
Pity poor Rush Limbaugh. The bloviating prescription pill popper has been turned down in his quest to buy an NFL team. Now he and his cohorts are playing the victim card.

This from the guy who has imparted these gems in the past:


"Have you notice how all the composite pictures of wanted criminals resemble Jesse Jackson?"


"Take that bone out of your nose and call me back"
acknowledged in a 1990 Newsday interview.


"Sorry to say this, I don't think he's (Donovan McNabb) been that good from the get-go," Limbaugh said. "I think what we've had here is a little social concern in the NFL. The media has been very desirous that a black quarterback do well."September 2003


Conservative luminaries like the Wall Street Journal, Pat Buchanon and Ann Coulter have all risen to Limbaugh's defense. This is not about a bigoted blowhard with a history of putting down minorities and women, no, this is about Obama's America that wants to suppress conservative speech. Unfortunately for the bloated one, the players union, with its high minority representation (78% black) is reportedly dead set against his ownership. Colts owner Jim Irsay is vehemently opposed to Rush buying the Rams.  Roger Goodell, the commissioner, isn't too keen on anything this risky upsetting the NFL brand.

The owners may be heavily in the Republican column but they are certainly not stupid. Words have consequences and Limbaugh has one person to rightly blame. And it's neither Barack Obama, Al Sharpton or Jesse Jackson.