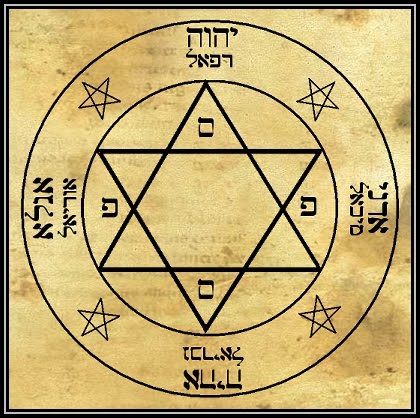 When you summon a familiar for the first time, the feelings of awe and power are unbelievable. I remember. I followed the mage's instructions explicitly, creating a magic circle on the floor of the walkup brownstone in Brooklyn with candle wax. (I bet the wax is still there after all these years. The landlord probably didn't have a clue what it was doing there and what it actually meant. Come to think of it, we never did get that security deposit back...)

The four cardinal points and the four animals of the tetragram were properly named on the starry map on the maple floor. Being a poor college student, a plank of douglas fir sitting on cinder blocks served as our altar. On this board lay a ceremonial sword, chalice, wand and a few coins.

Candles illuminated the scene, throwing light on the Desiderata poster on the wall next to the old refrigerator in my frugal one room apartment. My calculus books lay there in a heap on the floor.

I sat cross legged in the middle of my circle and kept repeating the mystical mantra that my Kabbalist teacher had instructed me would aid in snaring the familiar spirit. Yod, He, Vau...

When the djinn spoke, I just about jumped out of my skin. There, sitting on his heels in a silk blouse and striped genie pants was a certifiable, living, breathing, familiar spirit.

"You speak english?" I coughed and stammered, now faced with the tangible consequences of my occult meanderings.

"Why of course, silly," the familiar spoke."It wouldn't do much good if I spoke mandarin, would it?" he said with a sly grin.

I had to agree with him and assented with a tipped nod of my head. "True."

"Well?" The spirit looked at me impatiently, his squinty eyes nearly boring a hole through my knick jersey. "First timer, kid?" he whispered out of the side of his mouth and I must admit I felt a bit embarrassed.

"How did you know?" I blushed.

"Oh, just a hunch. Don't worry about it. We were all rookies once. It gets to be like riding a bike. What can I do for you?

Now I was absolutely flummoxed. I had studied and prepared for this moment for months and had never thought about what I would do if I had ever actually caught one of these guys. Suddenly I felt green and way, way out of my depth. Trying to look as serious and mature as I could, I asked "What's your name?"

"My name is Azrael."

"Well Azrael, will you do anything I ask of you?"

"Within reason, but basically yes," he said with an impish grin.

"Well the first thing I want is for you to clean this dump up a little bit. Then I want two tickets to tonight's Ranger game. And pizza."

In the wink of an eye, the apartment was spotless. Dust was cleaned off the tops of picture frames, the back of toilet was so clean you could serve appetizers on it, even the spot on the shag carpet that had absorbed the heineken spill was gone. It was the cleanest apartment a guy could ever live in, at least a straight man. Sitting on the card table was a piping hot pizza pie, with half pepperoni and extra garlic.

"How did you know about the extra garlic?"

My familiar let loose with a humble cough and said, "Oh, just a good guess." He reached into his sleeveless shirt and pulled out the two tickets to the Garden. "It's mezzanine, but the view is unobstructed. Believe me, even these were a pain in the ass to get. With Brad Park playing so well and the Bruins in town..."

"These will be fine," I said, tearing into a slice and not wanting to appear too discourteous.

"Will there be anything else? You know it is Halloween and I'm getting a lot of calls tonight. The union gets a little pissed off if I don't finish my route. Everybody's a warlock on halloween, sort of like amateur night."

"No, that will be fine Azrael, maybe we'll do this again sometime."

The djinn stared at me and perhaps I'm oversensitive but I thought I detected a slight hint of derision. He disappeared in the flash of an instant.

The Ranger game was excellent. Giacomin pitched a shutout. Gilbert was this close to a hat trick. My date was very impressed with the seats.

I never called him back. It's risky to mess with the dark forces. And I hate to say it but I've had better pizza. He really couldn't get the crust right.