I am not going to belabor this, I am sure that few of you have ever noticed, or could care less if they had.

But have you ever noticed how some english people will substitute the f sound for th? As in, I've been finking about this. If you have never heard it, this blogpost will sound like gibberish and I advise you to skip ahead.

Never could quite understand it. F is pretty far from th as fricative phonemes go.

I lived with a bunch of english football players overseas in my youth. Many of them came from poor neighborhoods. You have never seen a rougher bunch of scoundrels, nicking, nutting, fighting, licentious pervs, I frankly loved those guys.

I played a lot of football with them, a bit of rugby, threw darts, drank Whitbread, learned a bit of cockney rhyming, had a jolly good time.

When my friend and I were taking the shuttle at Gatwick last week, a car full of drunken returning football fans shared the tram with us, pardon my effete innate snobbery if I point out that they were an ill bred mob and that drunk or sober I couldn't understand how one of the fellows could operate out of such a microcephalic cranium.

I decided to get to the bottom of the phonetics question. The habit of sounding a f or v for th is called th - fronting. How and why did it happen is a good question? I turn to Wikipedia.


Th-fronting is a prominent feature of several dialects of English, notably Cockney, Essex dialect, Estuary English, some West Country and Yorkshire dialects, Newfoundland English, African American Vernacular English, and Liberian English, as well as in many non-native English speakers (e.g. Hong Kong English, though the details differ among those accents).

I have read several linguistic experts try to explain the phenomenon. Although not a definitive assessment, I believe that at least in England, the practice was a conscious effort by working class people to utilize a dialect that was not shared by the social elites.

The first literary notation of the practice goes back to 1787. In England it was mainly centered in London and Essex and in Bristol. Now the speech has moved to Hull in the north and Scotland. Interestingly, according to this blog, there is a real gender split to the practice with very few if any women partaking of the labiodental fricative.

This letter writer to that blog makes some interesting observations. 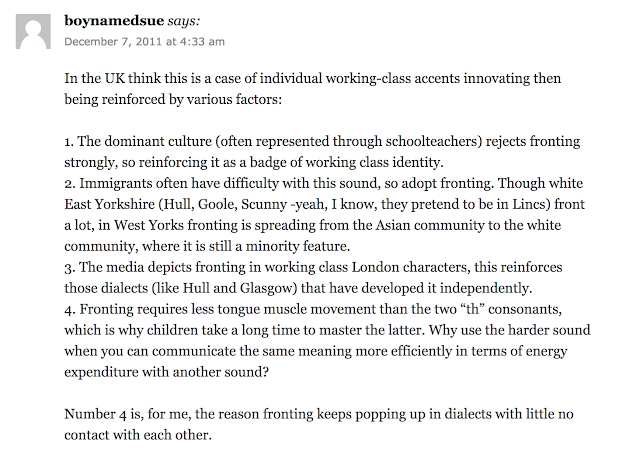 Could it be laziness or efficiency or is it merely a way to reinforce your working class street cred? What do you fink?

I fink fat the whole fing is foroughly marvelous.