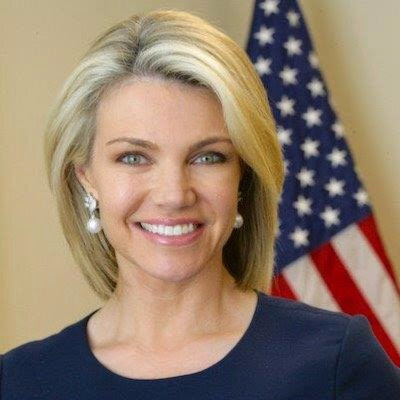 President Trump is nominating Heather Nauert to the post of United States Ambassador to the United Nations. Nauert is an ex Fox News anchor and as far as I can tell, right off their pretty blond barbie production line. This President of course has always liked eye candy.

I can't think of a better appointee to show the Trump administration's contempt for the United Nations.

This intellectual lightweight is famous for her once intoning that D-Day was the pinnacle of U.S. German relations, which reminds me of when Bush Press Secretary Dana Perino drew a blank on what happened during the Bay of Pigs invasion. But oh, that smile!

There is no crime in being young, or stupid for that matter but we should remember the intellectual strength of some of the previous people that have held that position. This has always been a post for the best and brightest. Not necessarily the hottest. From both parties.

Giants all. There were many more competent Ambassadors of course, Andrew Young, John Danforth, Bill Richardson and Nicki Haley to name only a few. They all had the intellectual depth, government experience and resume required for the post.

Heather Nauert clearly does not.

No, but a rare non embarrassment in this administration. I didn't agree with her ideologically but admired that he would buck the idiot boss on occasion.