I'm tired but I'll try not to belabor this. Pardon me for brevity but also do remember how much I get paid for this particular writing gig.

So I am sitting there next to S----, the ex Swedish fashion model with the fifty room castle in England on her way to buy a getaway in Cannes that just dropped another quarter million, married to a sociopathic man described to me as having had as many affairs as I have had glasses of water, who had been viciously jettisoned from the Investment Banking company over some meaningless discrepancies with the expense account, and god the people you have been the best to turn out to be the most vicious, don't they?

And we all apologized for our previously abysmal behavior and had a great laugh at our own expense and talked about our crappy mothers  and how rotten people were and S---- mentioned that I was a funny combination of cruel and kind and I guess that is right. And no way do I look sixty one. And would it be possible for me to fall in love again like I fell in love with my wife?  I answered in the negative and shortly after still received her marriage proposal and pronouncement. Was sort of glad that I hadn't checked my luggage. We got our car and scrammed the hell out of there, hopefully leaving any potential suitors at the baggage claim. 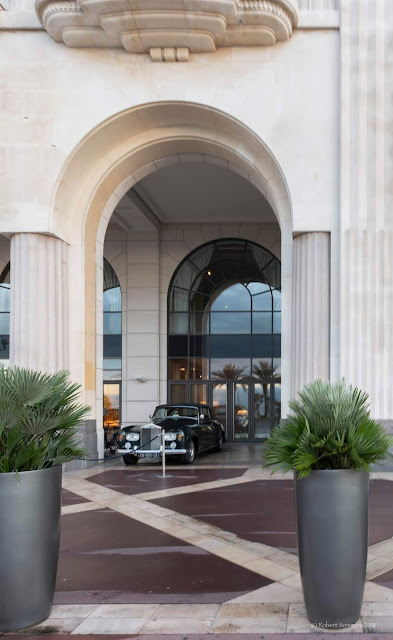 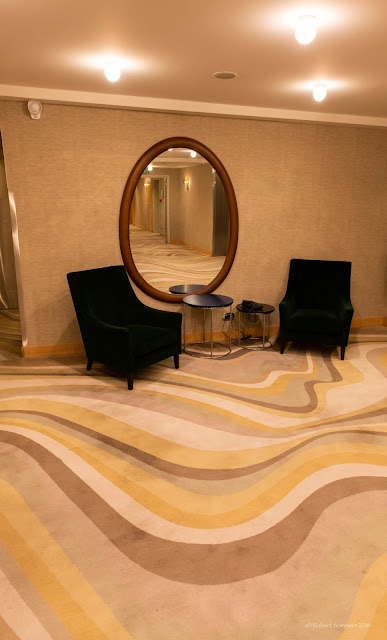 Hotel was very nice. They lost our car in the morning but these sorts of things happen and it was eventually found so no harm done. 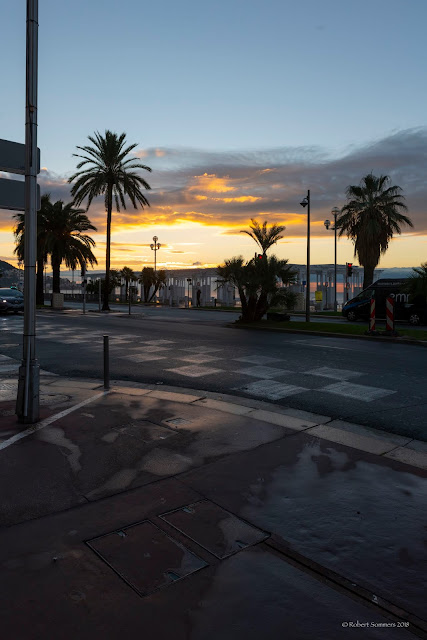 In the daylight I could hardly get over how much the plants looked like home. Same palms, agave, cactus, bougainvillea, Mimosa trees. Same exact climate.

The French Riviera is really quite homey. Sent Leslie a shot from my phone and she said that she was afraid to tell me it looked just like Fallbrook. More Catalina to me. 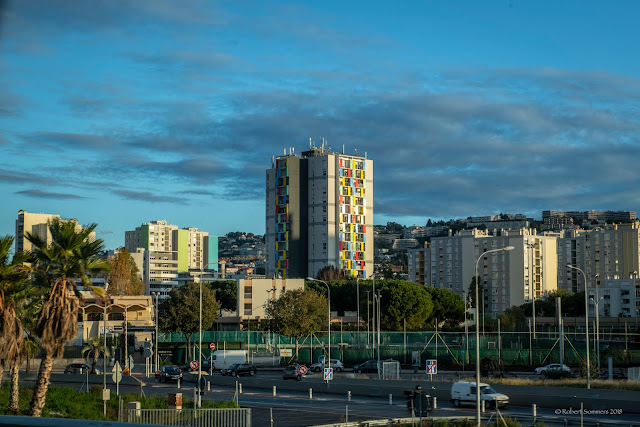 We drove to the A8 and started the two hour trek to our destination, Bormes Les Mimosas. My companion was a bit suspicious about my gps as it was asking us to travel on roads that he was not familiar with in his preparation. But it did take us where we needed to go in the short run, most expeditiously I might add.

Drove through Cannes, Vallauris, ended up stopped at a yellow jacket protest in Hyeres. Lots of beautiful unspoiled country in southern France, the alps a white counterpoint in the not too far distance. 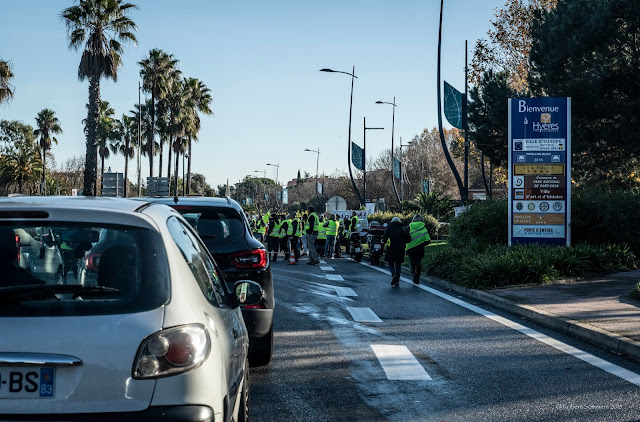 The Yellow Jackets are a protest movement against higher gas prices and taxes that started in the rural areas and eventually spread to the big cities of Paris and Lyon.

To a person the French I met on this trip were supportive of the protest, clutching their throats to demonstrate how they were being choked by the government. French are very proud and supportive of their revolutionary roots, much different than most Americans, who also once had a revolution.

We eventually got through the stoppage and made our way to Bormes Les Mimosas. Situated on a hill, it is a very picturesque village, known as a one time summer residence of the last French President. One of the most verdant town, known far and wide for its flowers. 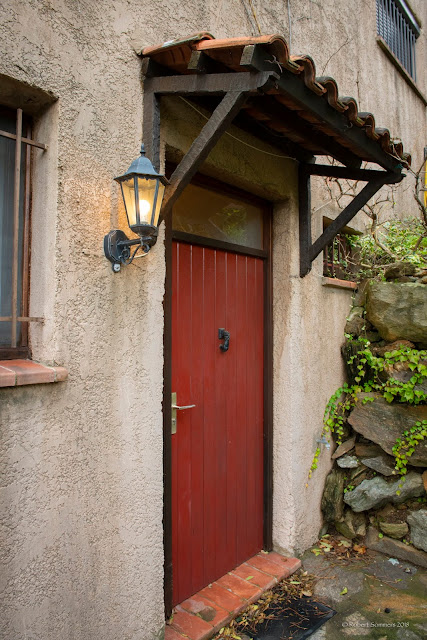 We stopped at a boulangerie/patisserie for croissant. Well I had croissant and raisin bread, my companion actually had pizza. Great coffee.

We met our agent, F--- afterwards, near the St. Francis chapel on the hill. Followed him to my friend's parents' home.

A lovely home and view, can see why they chose to live there for so long. Great light, an artist's dream. 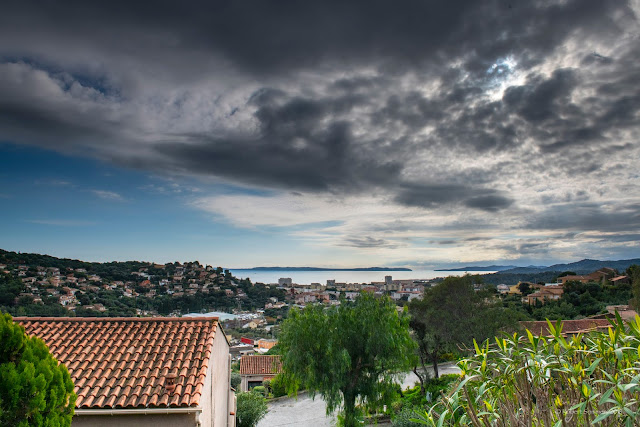 We walked around and made an accounting of the place. Figured out a plan of attack. Got our tools out and started working if my memory serves me right.

In the afternoon we drove to Le Lavandou and found our small boutique hotel, le petit boheme.

The proprietor was there and wanted to know if we ever read our emails, she didn't open until five o clock. She had two small children that she had to take care of. After the minor dressing down, she showed us to our rooms, no showers after ten or before seven, did we want to pay for a small buffet breakfast?

I have no complaints about the room or the accommodations. The proprietor, who by the way was a lovely girl from Normandy, even softened up a bit. The view from my room was beautiful, typical glorious village on the Riviera I suppose. 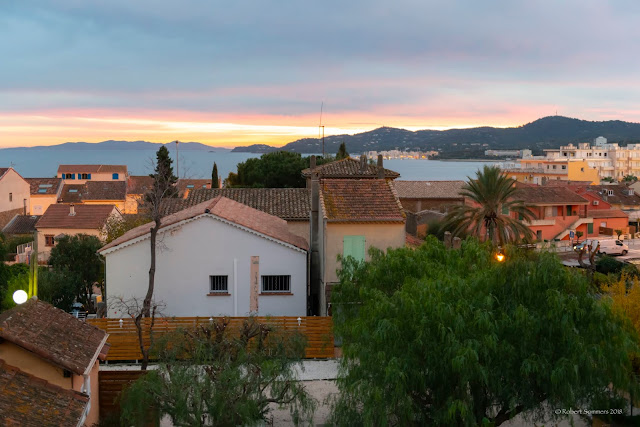 We walked down to the edge of the village on the ocean. We were out of season, half the restaurants were closed, much was shut down. 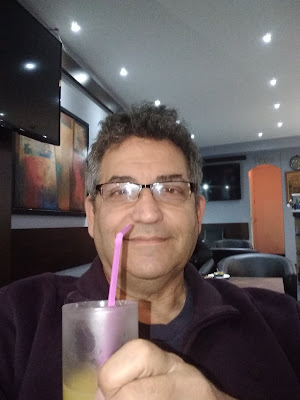 We found a bar. I had a few vodka sunrises, my first alcohol in a month. Excellent citrus juice in France. Both the orange and the pampelmousse. My friend enjoyed the very strong beer. The place was full of very attractive locals, both men and women.Very well dressed, not nearly as inked as you would see here.

Watched the locals play petanque at the pits in front of the bar. 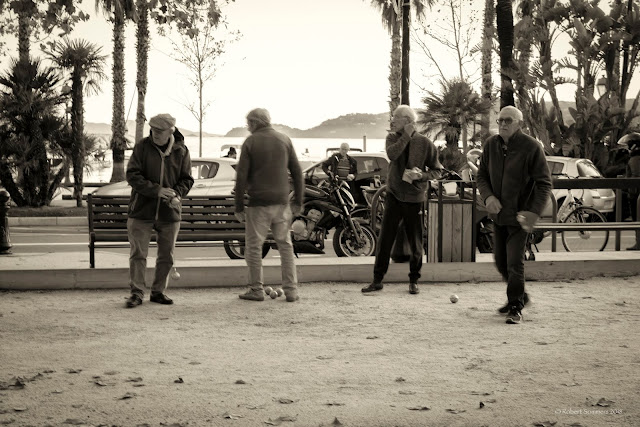 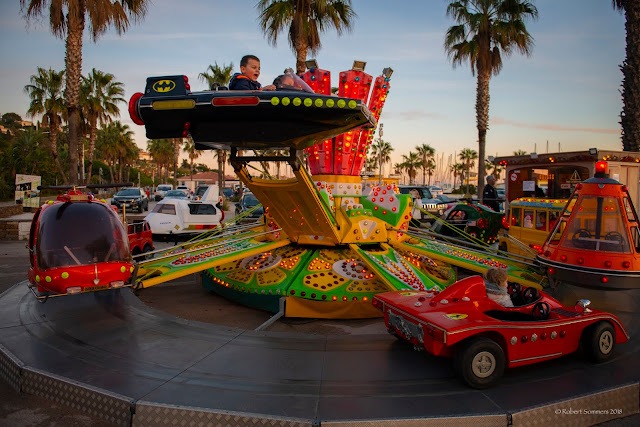 I walked down to the kiddie ride and snapped a shot or two, triggering the suspicions of a mother wondering why a middle aged man was taking pictures of children.

I guess this is as good as place as any to mention that I don't speak French, nor did my friend. I have visited the country a few times but this is my first time outside of Paris basically.

But I am fortunately linguistically inclined and the three years of French I took in school forty five years ago somehow decided to make a surprise visit to my frontal lobe. I was shocked at the words that came to the fore. Give me a month.

And since I am musing, let me say that the French people I met were wonderful on this trip, kind, patient, understanding, friendly, not at all the clichéd behavior one hears about when generalizing about a people. 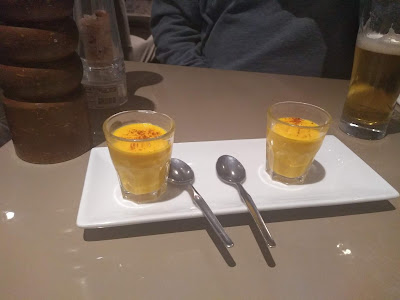 We found a place for dinner, Carpe Diem. Dinner does not start in the French Riviera until seven. Place was inexpensive and excellent. Started off with a muse bouche cleanser of carrot and coconut. 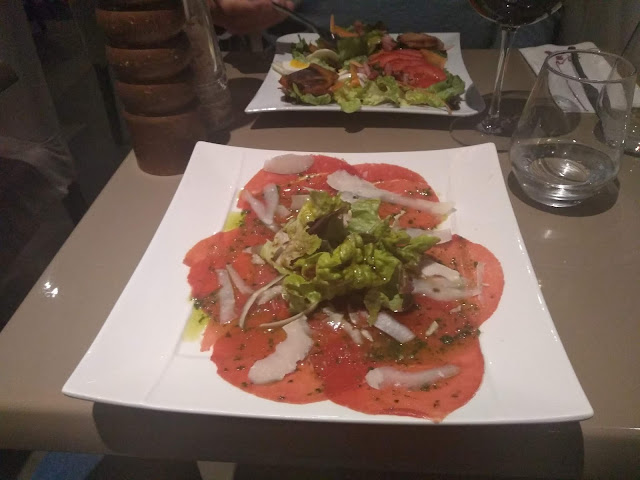 For an appetizer I had beef carpaccio. It was excellent. My companion says that his place in North Beach slices it thinner and that it needs to be served with lemon but I am not one to tell a French chef how to prepare his food.

I had a moist fish called rouget for my main course over a sort of half crunchy risotto. 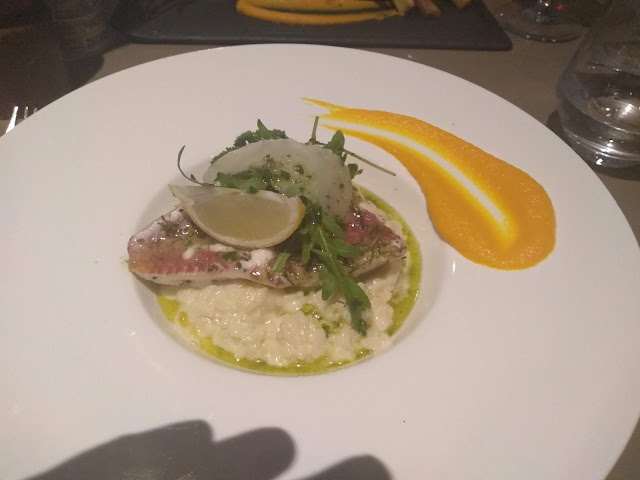 Dessert was Panna Cotta with raspberry. The sparkler is courtesy of my pal's chocolat mousse. 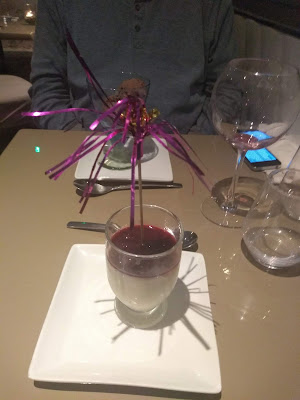 The whole meal was under 22 euro a piece. All of our meals were similarly inexpensive and almost all supremely well prepared and delicious.

We walked back to the hotel. The day before I left I pulled a hamstring pushing large agaves around and now both hamstrings were hurting as well as my foot and knee. Walking came hard.

Woke up to a lovely sunrise the next morning. 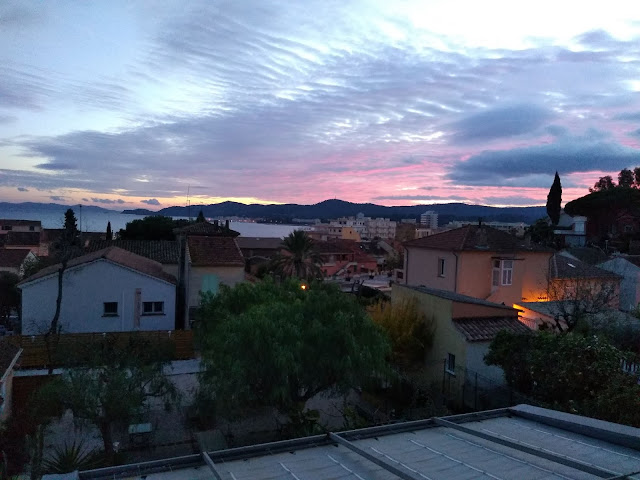 Grabbed the light breakfast, a croissant, yogurt and cheese and cold cuts and we drove back to the flat. Worked all day without a break. Ended up with punctures, blisters, cuts and the like but got a lot done. Both of us did. I was originally going to do the trip by myself. While I would have completed the job on my own, eventually, his presence and contribution definitely made things easier. 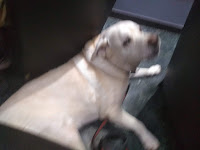 After work we made our way back to the bar. A soccer game on television brought a lot of people out. Wasn't in the mood to drink that day but did make a new friend. I started petting this dog and it fell in love with me. Cried when the bar owners tried to take it away. The dog, not me.

The french love their dogs and god do I miss having mine. This big guy was great. Pet it for about forty five minutes. 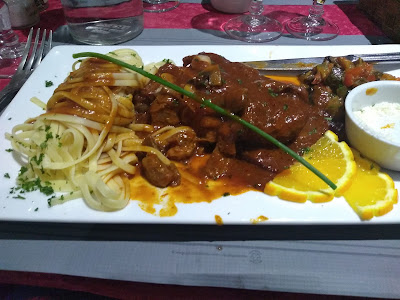 That night we went to a place called La Parma. I had an excellent salad and veal osso bucco.

My friend, who had veal milanesa, cracked me up when he said that the French still knew how to torture a veal properly, something lacking in America. It was delicious. My friend may have a point. 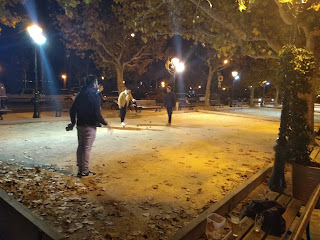 Walked past the boulle courts and made our way home, thoroughly exhausted. My buddy says that I was snoring with my eyes open and I don't think he was kidding.

Third day much like the second and first. Wrapped up the tack and staple pulling, started flattening canvasses and wrapping and packing.

Got all the boxes ready to ship. Loaded them in the SUV. They fit.

Finished we decided to celebrate and have lunch. We took a wrong turn and I saw the sign that said we were headed for San Tropez. I would have loved to continue on. My friend did not have the same taste for exploration, at least on this trip. He turned around.

Not my rodeo, I was a hired hand and could not call the shots. Much different when I am traveling with my wife. We take a lot of chances, always want to discover something new. Everybody travels differently.

Lunch was duck for me. Forget the name of the place. Ate so much duck my jaw hurt. My friend had a pizza. 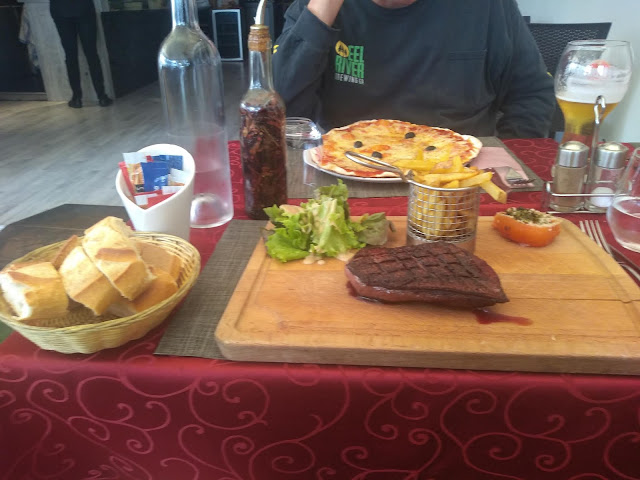 Went back to the hotel and rested that evening. My buddy found a new bar that played blues and had a loud and brassy barmaid. I wasn't interested in drinking but was cajoled into a shot of Jamisons. I am not a wine or beer man. If I drink it is usually spirits. Other stuff affects my respiratory system and I don't really favor the buzz.

We went back to Carpe Diem. Had seen the owner at the bar. He brought us lemoncello. I was going to order a risotto with shrimp and truffle but he suggested that I have his macaroni with five prized local mushrooms instead, since he could only serve it a few weeks a year. 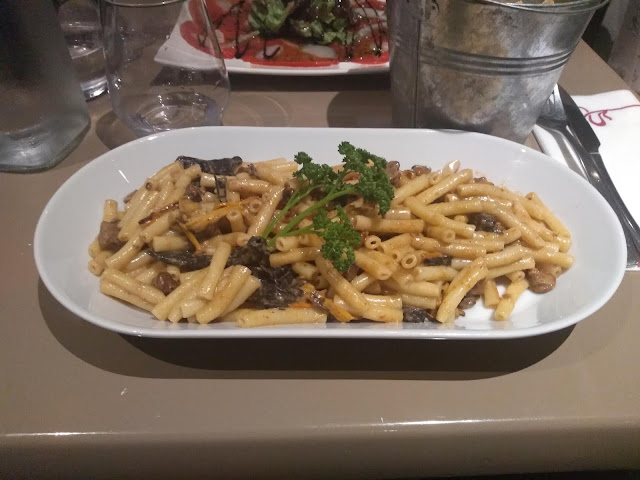 Simple but delicious. I am glad that I listened!