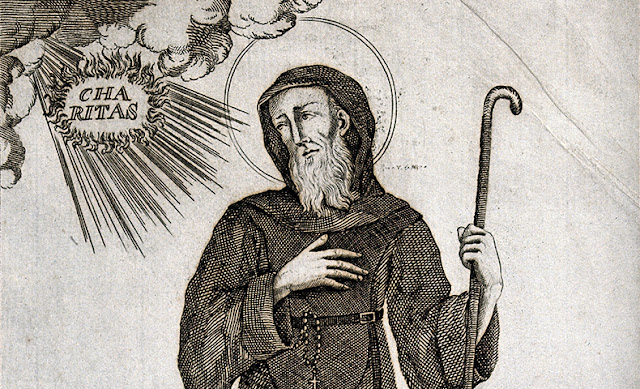 The year is 1481. Southern France is awash in the dreaded black plague.  People are dying everywhere in the streets. French King Louis XI is sick with the horrific plague and near death in the town of Bormes, staying at the castle of the governor.

It is known at the time that there is a Calabrian priest in Italy who is a miracle worker and is said to on occasion even raise the dead. 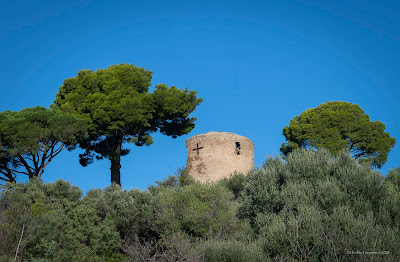 King Louis begs the famous priest to come and heal him. St. Francis of Paola (1416-1507) was an Italian priest and saint of the 15th century. He is said to have raised six people from the dead in his lifetime and to have committed numerous other miracles.

Not being impressed with celebrity, he demurs. He undertakes the journey only after much prodding from Pope Sixtus IV but can not land in either Toulon or Monaco because they are so rife with the disease.

Instead he lands his boat at Lavandeau and lays his staff and sandals on a rock. Local lore says that the items made a permanent impression on the rock, which still exists in the harbor to this day.

St. Francis can not save Louis, he instead enlightens him as to the need to get square with god before making his final journey. He is said to heal numerous other people in Bormes and the surrounding towns and throughout Provence. He influences Louis politically, helping to restore peace between France and Brittany as well as between France and Spain.

Francesco de Paola is the patron saint of sailors, once he is said to have traveled to Sicily by laying his cloak on the water and using it as a sail. He was known as a saint with a gift of prophecy. He founded an order named the Hermits of Saint Francis of Assisi, later known as the Minim Friars, the least of the faithful. They were also vegans. He once saved a lamb from a fiery furnace which may be what gave him the name of Francis the Fire Handler. St. Francis Paola called animals by their names, even after their lives had ended. He apparently believed they continued to exist after their deaths. Might just be the saint to invoke if you desire communication with a long lost tabby. 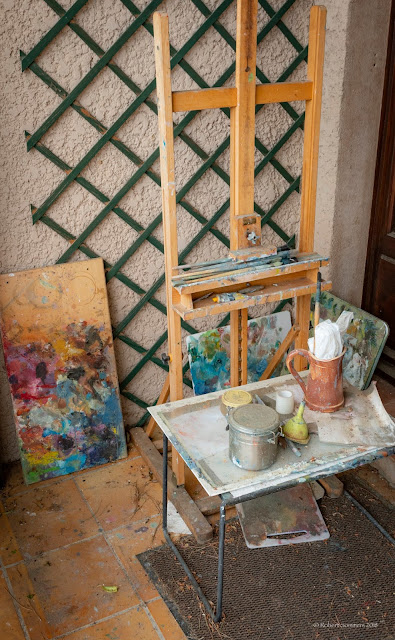 I am back from my journey to the same small villages where the famous mendicant is said to have made his journey, Bormes les Mimosas and Le Lavandou. I, of course, performed no such miracles.

I was helping a friend pack his mother and father's estate. His late stepmother and father were both very equally competent painters and had a flat on the Bormes hillside for many years. 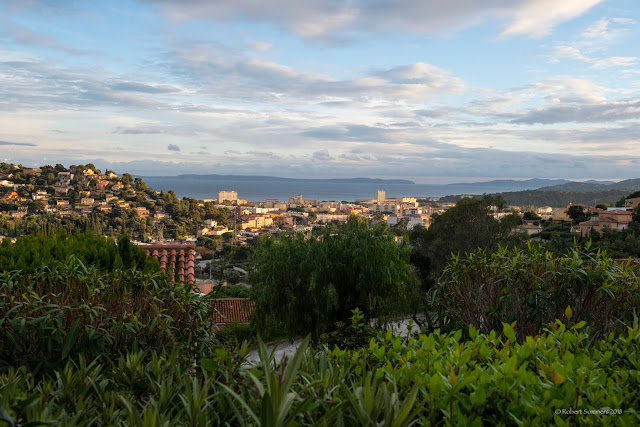 It was a working trip and not a vacation. I took very few photographs, we worked pretty much constantly and had little if any time to explore the region whatsoever. Many of the shots I did take I took with a rather crummy cell phone. Oh, well. 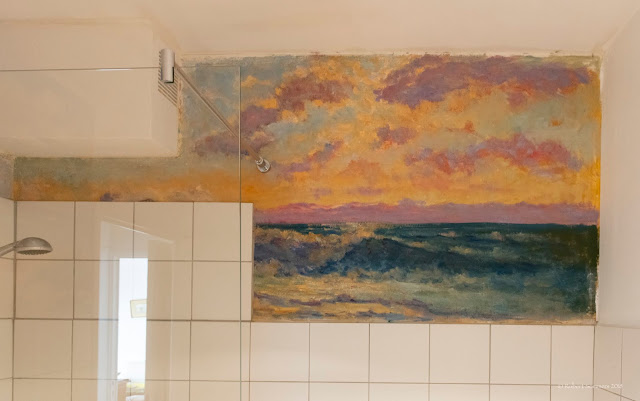 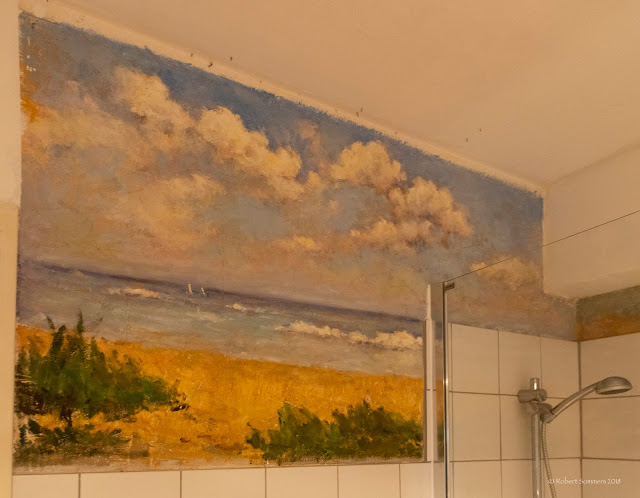 You could tell the love that the artists had for their home on the French Riviera. the lovely light on the village below. I had to snap a picture of the frescoes that they had painted in their shower, which they will never personally visit again.

Life and its eventual ending is such a bittersweet affair.

There were approximately 125 paintings that needed to be sent back to the United States. One hundred or so needed to come off their stretcher bars. I am not sure if you have ever taken tacks and staples out of old wood stretchers but there were many and the work is fairly miserable and treacherous. One false slip or move and we would be cut, the tack puller, screwdriver of sharp pliers cutting into your hands. I left a bit of blood on a canvas or two.

So we had to stay diligent and focused and we had to first and foremost which we did in two and a half days, working through lunch and after a good but paltry breakfast at our little hotel at the harbor village of Le Lavandou. 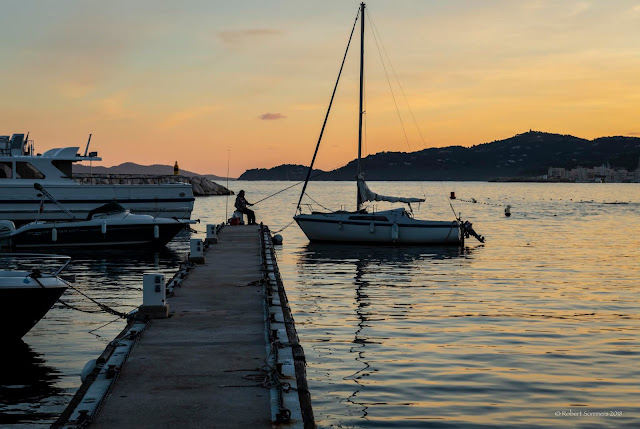 My journey started in Los Angeles. Leslie drove me to the airport in the much needed afternoon rain. My accomplice had arrived earlier in the day from the north. We flew on Norwegian Airlines, which may or may not be better than some. The only observations I can muster is that the attendants looks like tartan plaid wearing orange julius servers. The actual food was perfunctory at best. but that is what you get these days. You slide a credit card into a slot on the seat in front of you and then pay for snacks as needed, 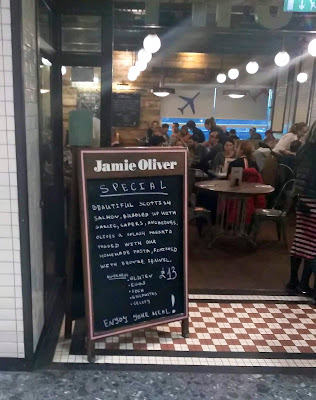 We finally arrived in Gatwick, London after a seeming nighttime of eternity and waited several hours for our connection to Nice, France. We ate at the Jamie Oliver restaurant.

I had terrible luck at the other celebrity restaurant last time at Heathrow, the Gordon Ramsey affair that wins the prize as worst ever hands down. Will try Oliver this time.

I ordered an eleven hour cooked pork and beef ragu tortellini. I made a joke about paying an extra quid for getting the ragu cooked for one more hour and the server went into a humorless explanation of why that was indeed impossible.

We sat right by the line and watched the preparation of our food. What I received was not tortellini but instead an unremarkable and small bowl of papardelle and what I am guessing is beef cheek.

The manager came over and I asked about the pasta switcho. He said he wondered if I would notice and assured me that it was the same meal as I had ordered with the exception of the long papardelle noodle. I think he was lying. I think I simply received the beef cheek, which happened to be less expensive not that that is a salient detail in this conversation.

But that it what you invariably get in "celeb" restaurants, from Puck to Emeril, to Ramsey and Oliver, food with a "name" to hook tourists which is rarely distinguished in any way but hopefully at least what you actually ordered.

The food was tasty, but pretty much middle of the road good and nowhere near sublime or special. I think that I will write Mr. Oliver a letter. 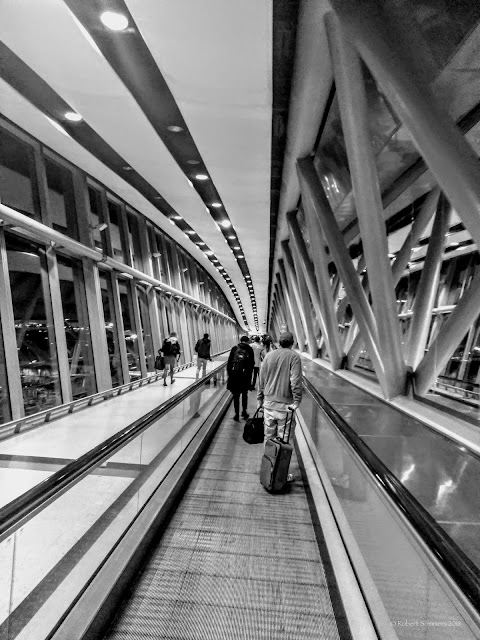 We caught our connecting flight to Nice, France and arrived and got our car in the dark. 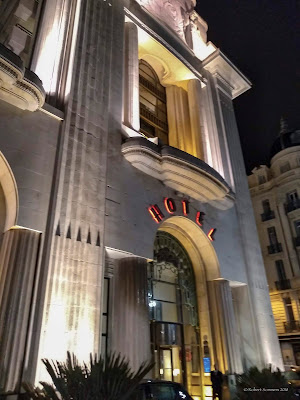 A nice large SUV, which should be the perfect size to carry our eventual cargo to the shipper. My friend's wife, who is incredible, took care of every detail perfectly and secured us a room at the lovely Hyatt Regency on the promenade. Lovely, classic and elegant, excellent and attentive staff. Even charged my cell phone. Dumb me forgot his charger.

This hotel is in the next block from the site of terrible terrorist incident in Nice, on the Promenade. Place reminded me of Miami but swank. Very James Bond. I plied my luck at black jack at the Casino next door. Saw no chemin du fer but didn't look very hard. No starlets hanging on my tuxedo, in any case.

I managed to piss off a few fellow travelers at the airport on the way over who felt that they could manipulate a few rubes and cut into the preferred line.

I was having none of it and things got quite antagonistic very quickly, they not only pointing out my own personally deficiencies as a human being but what stupid country I was from. I wisely withdrew from engagement, there being no way to win at that point.

But life, in the way it loves to have a good joke from time to time, played its last card. I walked up to row thirteen and guess who were my seat company on the flight? They blanched, screamed, said I would have to sit somewhere else but I would have none of it, smiling and mentioning life's sweet poetry.

Later the woman proposed marriage. But that is, of course, another story... 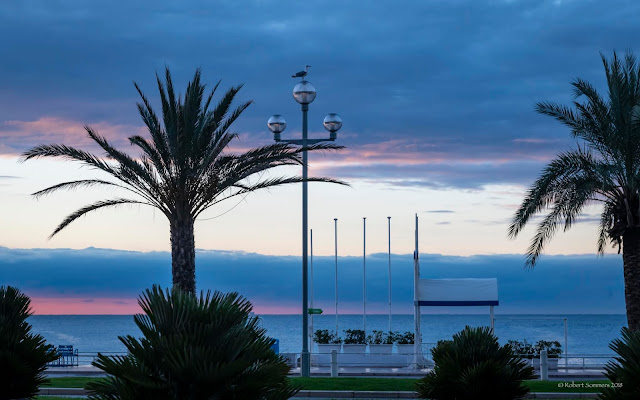 Hello, you potential bigamist! Loved the landscapes in the shower. Welcome back!

Liked your history/tale of the priest too.

Happy fifth night of H...Ch...depending on how you spell it!

Well, I for one, hope there is at least six more parts, because you’re barely scratching the surface here, dude…

Cough up the rest of the story. Or else.
Welcome back I can’t fucks with that
Flying shit, remind me to confess my
Stories.

Robert, great blast, good photos even if from a cell phone, wonderful descriptions of the scenery and accommodations, not to mention your wonderful wit.
Thanks for sharing.