With all the craziness, travel and medical issues I have been dealing with, I haven't been out with my camera for ages. I miss it, capturing images is a big part of my being.

I decided that that was going to change today. Got up with the sun and drove up to the reserve in San Jacinto.

I usually have the place to myself but there were four or five cars out there today, due to the holiday. Cool, I can share.

As always, please click on a photograph so that you can see them all enlarged.

First bird I saw was this beautiful loggerhead shrike or butcher bird. 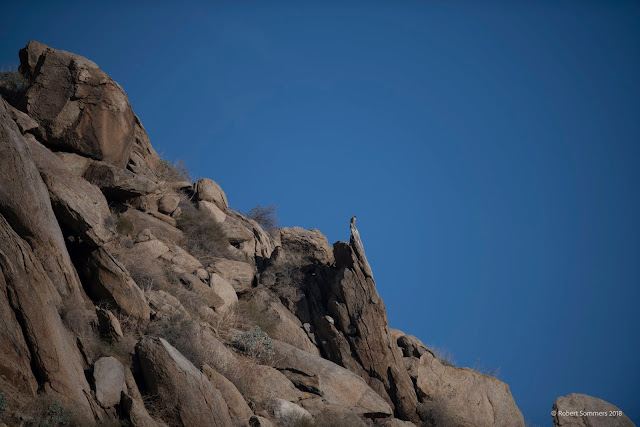 I espied a hawk or eagle on a distant rock perch to my left. It was out of reach for my lens setup but I snapped a few pics anyway. I have shot eagles in that area before. This one looked like a red tailed hawk at the extreme distance with its prominent white chest. I took some shots with my longer Sigma 150-600mm C but haven't looked at them yet and the nikkor 400mm 2.8 prime has much better optical quality. Not an eagle.


I shot birds in the field, on the wing, in the trees, on a perch like this kestrel here. Made some, flubbed some, the usual. Saw some new birds, failed to see some regulars like the kite or the vermilion flycatcher. Saw a golden eagle but it was a long way away. Mostly it just felt really great to be back in nature, in the clean air, listening to the sounds of the natural world. Saw some rather large mountain lion tracks. They are there, I still have not managed to run into one...


I took a long hike with my heavy gear. Wondered for a second if it was wise with my recent heart mishegoss but went for it anyway. It was beautiful out there. I wish that I had put my wide angle on to capture the gorgeous landscapes and reflections but for some reason I never did. Need to come back soon and shoot landscapes for a change.

There were hawks beyond count, maybe a hundred or more. I didn't even stop to shoot very many, just enjoyed the immense pleasure of their company. I believe that this guy, partially obscured by shadow is a dark morph red tailed juvenile. Rare to see them this chocolatey.

At times the red tailed hawks came in bunches. 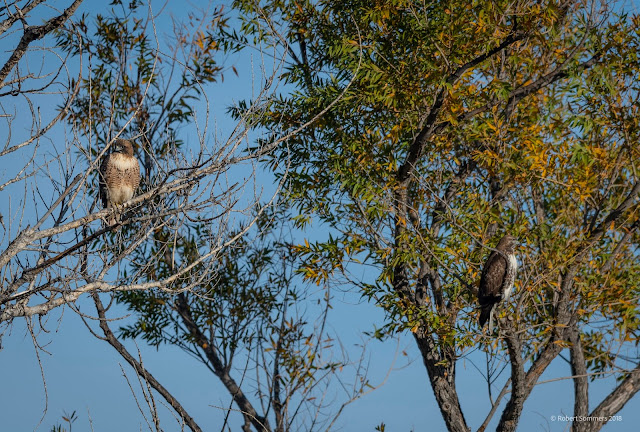 It is really amazing to see the many different color variations of this marvelous buteo.

I drove out towards the Walker Ponds and saw a juvenile or immature bald eagle on a telephone pole. I walked pretty close but the bird did not seem to be bothered by me in the least. 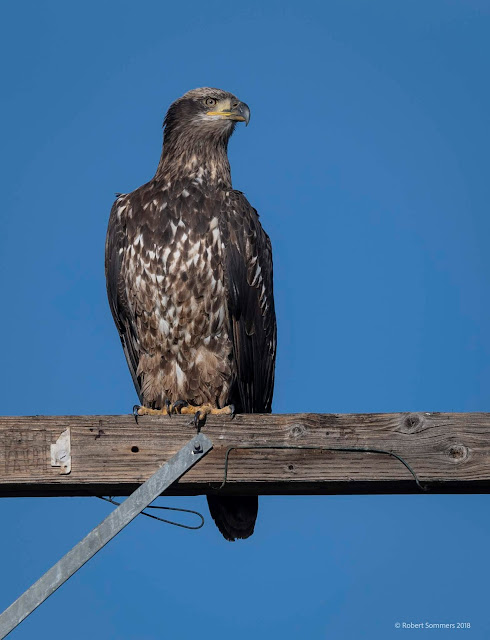 We chilled and enjoyed the morning together. 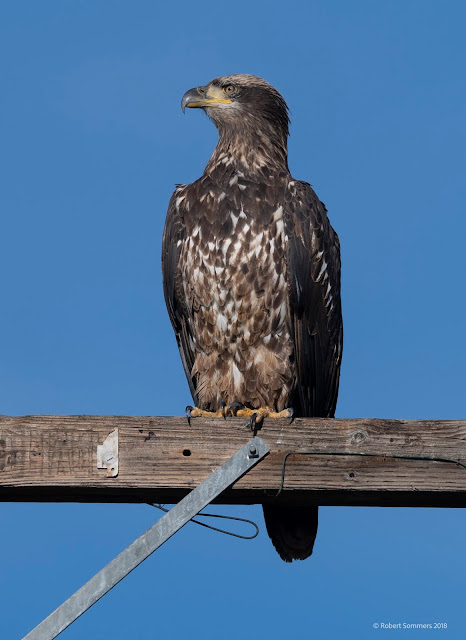 Some Vietnamese guys with big lenses came by behind me and started firing off shots. There is a definite field etiquette which we all try not to cross and they were respectful and cool. Don't kill anybody else's shot. 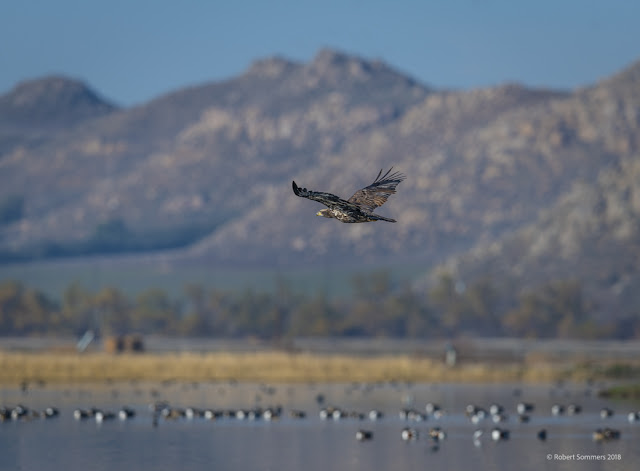 Eventually our raptor flew the roost. 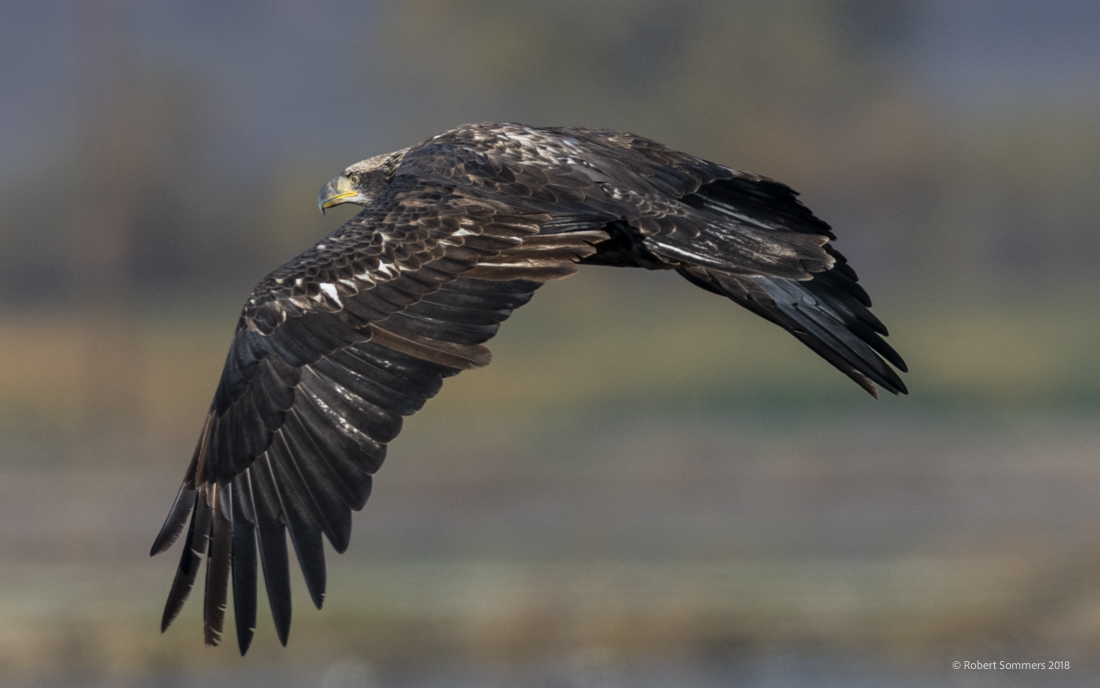 My friends in Alaska tell me that eagles are like pigeons up there, they still fascinate me and probably will forever. 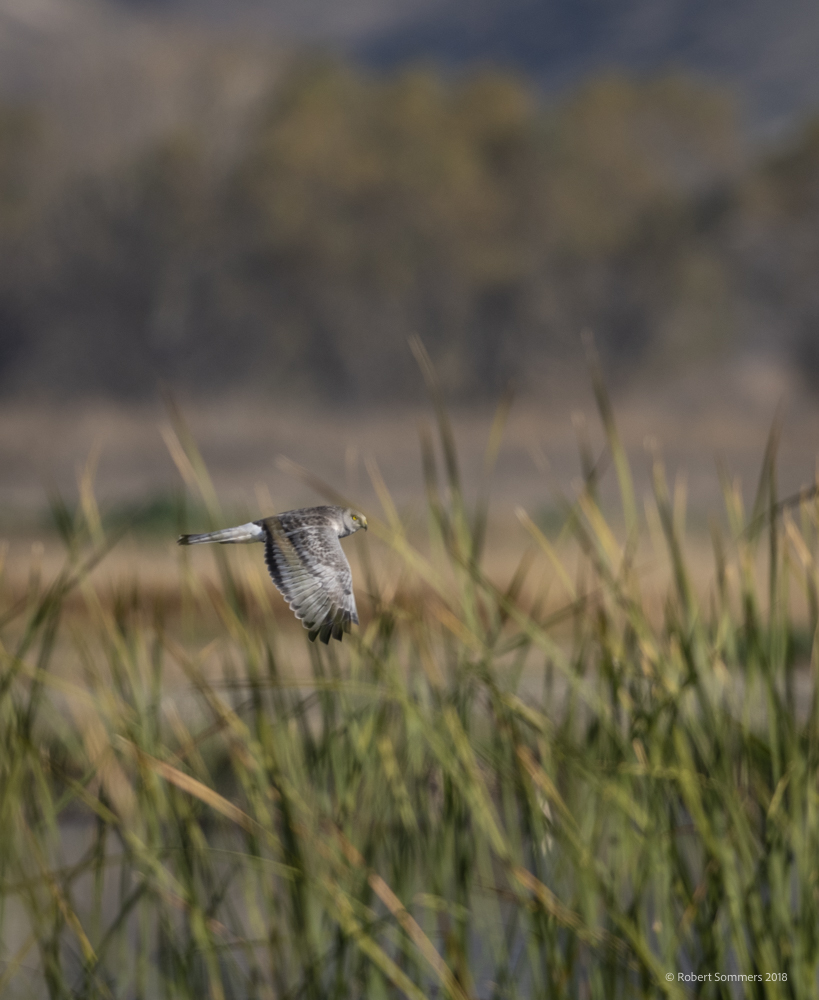 I had heard tales of an albino harrier hereabouts for months but had never seen it before today.  A ghost bird. I thought that it might be leucistic but it is merely a lighter morph adult male. Fairly typical, I guess I mostly see females. Wish I could have taken a clearer shot. I will be back. Beautiful bird. 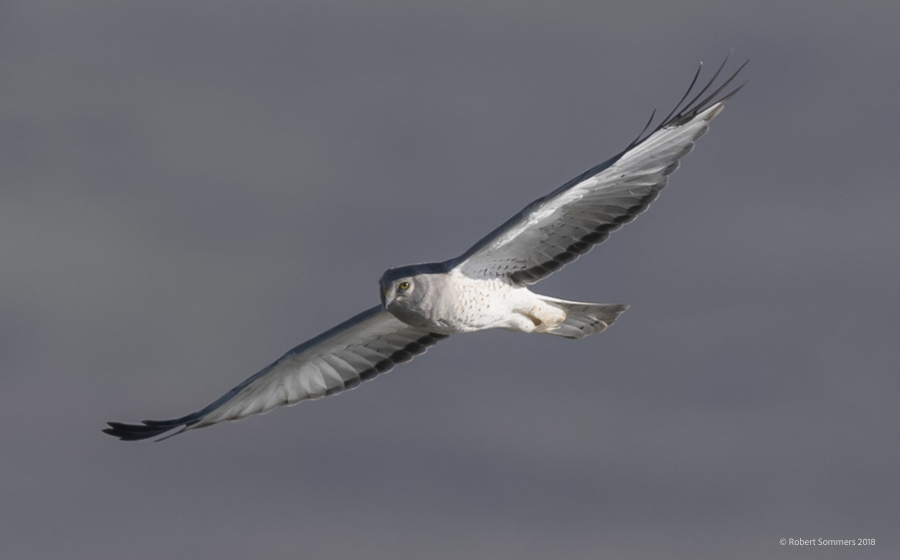 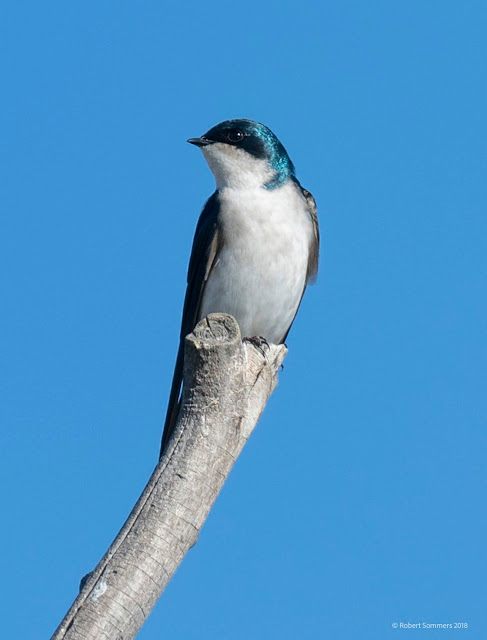 Glad I was able to see it. Come to think of it, this shot ain't too bad. Have a couple more to look at too.

I drove back to the loop and took my walk. Saw the standard stuff and this lovely bird in a tree.

I am going to guess a violet green  tree swallow (thanks, Ken Weaver). I have shot them in the air but never perched. Tell me if I am wrong.

It was time to leave. As I was driving out I saw the three fellow photographers with their tripods, wimberley's and long lens's out taking pictures of this harrier feasting on a coot by the edge of the road. 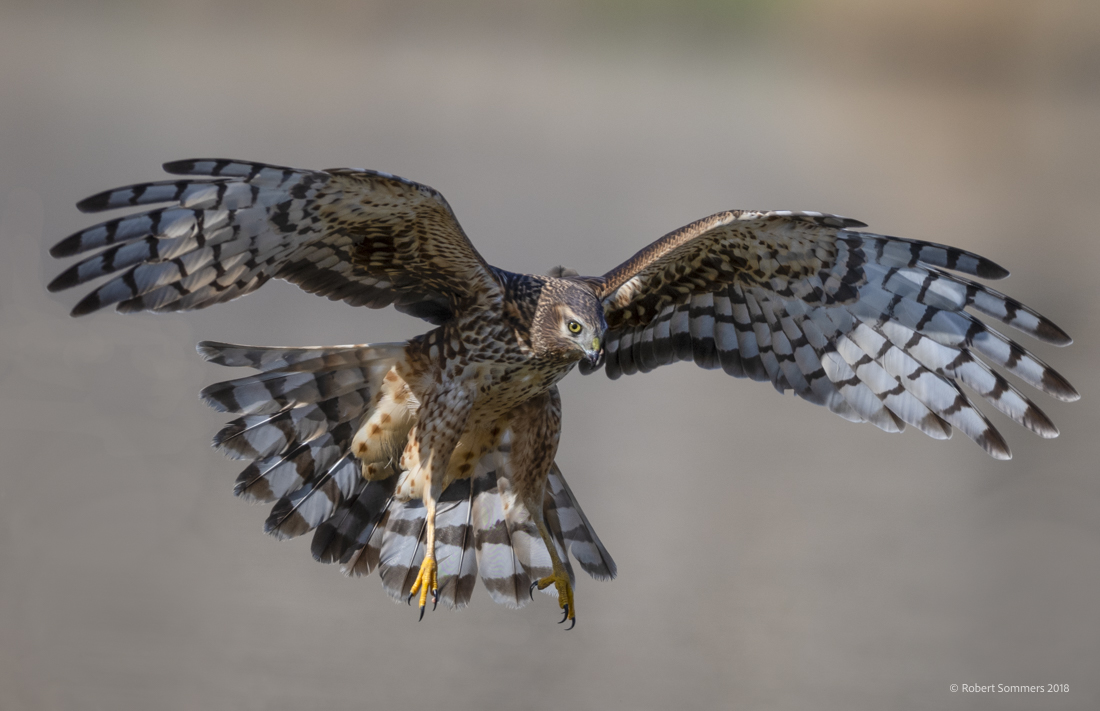 I joined them and grabbed some shots. 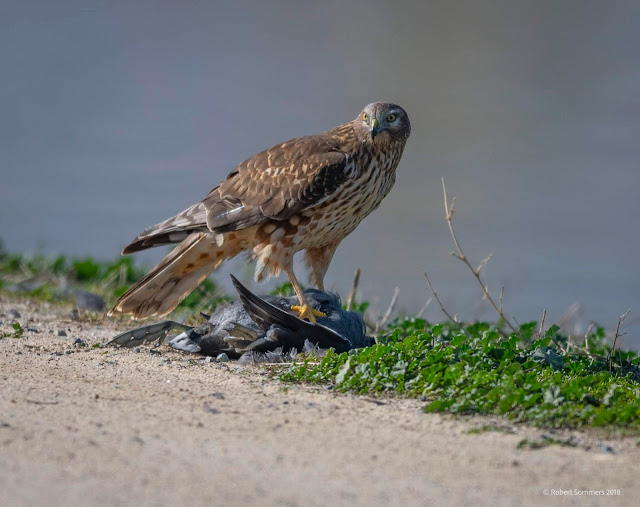 It will take some time to process and to see what I have got. The bird left and came back several times, was a bit bothered so I decided to split. Don't like people watching me eat either. 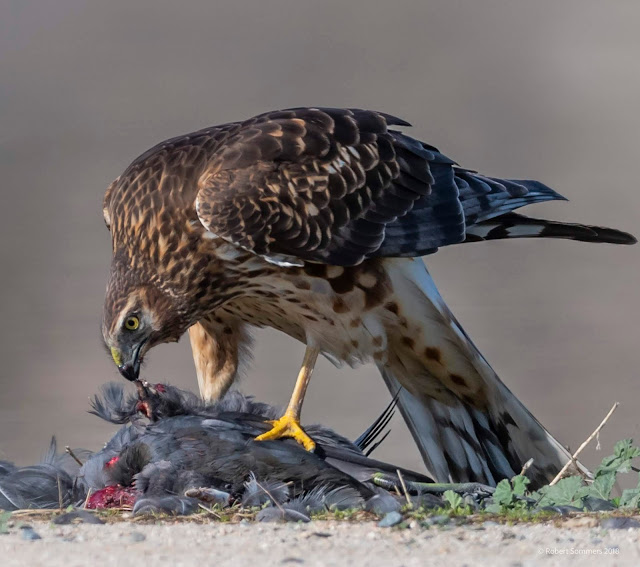 I talked to the other photographers, they spoke broken english but told me that they had shot a peregrine earlier. I was incredulous, never seeing peregrine falcons there. But hey, they said they saw it,  might as well believe them.

I stopped off at my office to unload my gear and stuck my card into the computer. Funny, that hawk or eagle I saw on the rock. It was actually a peregrine falcon. They were right. 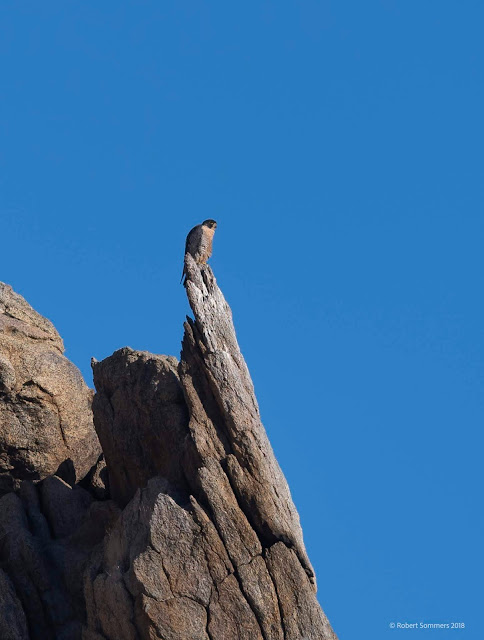 Hopefully I will be back very soon.

Thanks, Wonderful photos, I enjoyed them all.