Spare a brother a blood thinner? 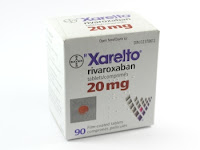 I am definitely feeling better than I was. It was pretty brutal for a couple days but I got off a bunch of stuff and thankfully removed my feet from the concrete slippers. Having fierce headaches at night but hopefully they will soon abate.

I have a couple of procedures on my horizon line, including an ablation, something my doctors and I have discussed for over ten years and can no longer ignore. Much better technology now, glad I waited.

One problem I have is that the blood thinner of choice, Xeralto, is so freaking expensive. Retail is over $500 for a month's supply, discounted a skoche at CVS at $447 but still way too expensive out of pocket and the insurance won't cover it for some reason. 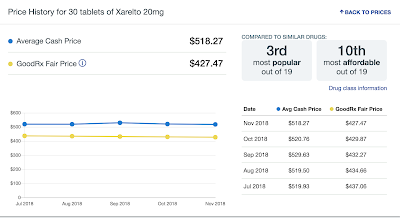 It says that it is the tenth most affordable, which is hard to believe but than I saw that the most expensive anticoagulant, Angiomax is a cool $58,251 per dose and that makes me look like a piker.

I hate to be a beggar but if any of my pals have any spare Xarelto around that I can mooch that they are no longer using, it would be very much appreciated.

I am going to try to petition HealthNet and see if there is a workaround but I think they believe that Coumadin is sufficient. And there won't be a generic substitute for Xarelto available until 2021. So I am sol for now. Will pony up the five simoleans if I have to but I would rather not.

Postscript - Called Xarelto, they put me on the amazing Janssen Plan, only ten dollar a month co-pay!
Posted by Blue Heron at 11:35 AM

Robert,
Why not Eliquis...I have been taking it and several friends also were perscribed Eliquis
for our A-Fib.
JS

Do not take Pradaxa! My dad was on Cumindin and then was switched to Pradaxa and had a brain bleed that shifted his brain...they couldn’t give him a coagulant Vit K until the Pradaxa left his system...he had to have brain surgery to relieve the blood...he was 80 yrs old and he survived the surgery...

Thanks, I am set with the Xarelto now. Sorry about your pop.