Andrew Wheeler, the long time coal lobbyist who now runs the EPA, said something pretty scary the other day.

He downplayed the effects of climate change by saying that most of the dire changes won't effect us for another 50 to 75 years.

You almost have to close your eyes and let a statement like that sink in.

50 to 75 years is a blink of an eye in earth time. It means that we are truly at the door of destruction. 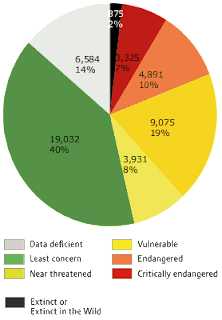 And rather than summoning the will to at least try to do something to stem the tide, certain parties are content merely to swap out the deck chairs on the Titanic.

We are at most a flyspeck on this great planet, life is bound to survive in some form, but our pitiful stewardship has unveiled our worst tendencies for the whole rest of the universe universe to observe. Half of the planet's plant and animal species are said to be at the risk of extinction. Who knew of our our tremendous capacity to enable such an apocalypse?

To be fair to Wheeler, he also said that he considered water pollution an even greater threat than global warming.

When even the ostriches pull their head out of the sand and acknowledge that things are really this bad, it means that we are in a heap of trouble.
Posted by Blue Heron at 9:21 AM