Leslie and I went to show a painting in San Diego on Sunday. People want to see how things will look in their homes. No sale but we had a nice visit.

I decided to visit the family cemetery afterwards, Home of Peace on Imperial Avenue. Imperial Avenue has a reputation for being a little gritty but the cemetery is kept up very nicely. Few complaints from the inhabitants anyway.

Seems a bit harsh but nobody asked me. Of course by charter and covenant, Jews couldn't live with the gentiles in La Jolla or Rancho Santa Fe in 1939 so why would they want to die with us either? Or we with them? Makes sense.

Interestingly, the Point Loma cemetery was located in Roseville and the area was first developed by a German Jew who came to San Diego in 1850, Louis Rose. He was the first Postmaster of Old Town and gave Rose Canyon its name. Colorful and very productive person.

My grandmother Pessia was buried at Home of Peace in 1965. For some odd reason her gravestone bears her older sister's name, Pola, and I think an inaccurate birthday, 1892.

I believe that she may have had to have assumed her sister's identity to get into this country.

Pessia Szkarlat was one of nine brothers and sisters from the town of Wyszkow in Poland. Only one other family member escaped Auschwitz, her sister Malka. The rest of the shtetl perished.

She was lucky enough to get to Palestine before the holocaust. Her gravestone has a lot of calcification, the letters are barely readable at present. I need to find something to clean it up.

My grandfather is buried in Israel with his second wife, Rosa, in Givatayim, where he lived for many years. My late brother Buzz took his ashes to Israel and obeyed his last wishes regarding his ultimate repose. 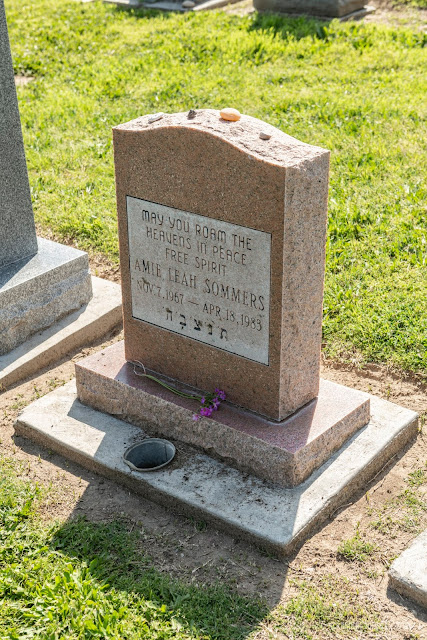 We noticed two things, a lot more Russians than I remember and a lot more gravestones with Spanish names.

I think that the cemetery must serve a large Jewish population in Tijuana and other parts of Mexico. Probably don't have a Jewish cemetery down there.

The Weinbergers built a wonderful bench with a nice quote from Proverbs, "A good name is rather to be chosen than great riches."

Typically you don't see a lot of ostentation in Jewish cemeteries, no McMansions for the departed like you see some places. Things are kept pretty simple.

Not a lot of flowers either, we tend to go for pebbles and rocks. Better than a plastic flower, in any case. 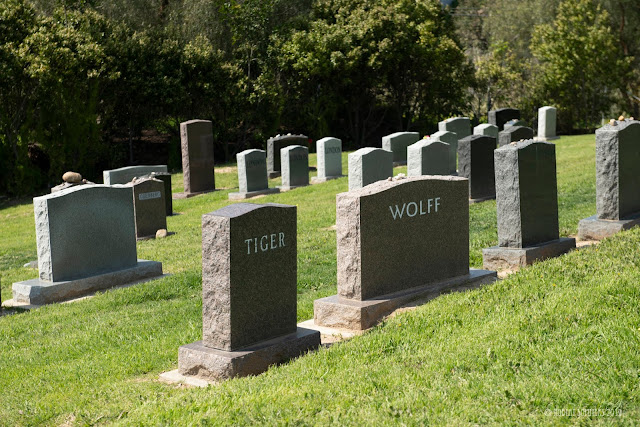 Leslie pointed out how seldom you see a Wolff laying down next to a Tiger. Good eye.

Did you know that there is an old Jewish cemetery in Lake Elsinore? Like Murrieta Hot Springs, the town had a lot of Jewish residents in the 1950's. Now it lies mostly forgotten.

Some say the residents fled after the synagogue was torched by an arson fire in 1978. An escapee from an Oregon state mental hospital who mistakenly was released from Riverside County’s General Hospital admitted starting the fire and was arrested.

Last time I saw the cemetery it was in shambles but some wonderful volunteers did a really nice job cleaning it up and it is supposed to be beautiful once again now.