Kukulkan is coming and he might be very pissed.


I first visited the Mayan Pyramid of Chichen Itza in 1983. During sunset on the spring equinox, a serpent of light appears on its side every year and slithers into the ground, at least in a conceptual way. It just so happens that my ex wife and I unwittingly managed to visit it that very moment, that very day, and watched the whole show. Luck or providence, you tell me? Had no idea it was going on, perhaps we were directed?


According to legend, twice a year when the day and night are in balance, the pyramid called El Castillo, dedicated to Kukulcan the feathered serpent god, is visited by its namesake. On the equinox, Kukulcan returns to earth to commune with his adherents, provide blessings for the harvest and good health to all before entering the sacred water, bathing in it, and continuing through on his way to the underworld. The serpent is known throughout Mexico and Central America, known as Quetzalcoatl to the Aztecs and Gukumatz to the Ki’che’ Mayan. In fact, the deity dates back at least as far as the Olmecs of 15th century b.c.e.

It was an unforgettable sight we saw, one that we shared with about ten thousand Mayan revelers, many eating tamales and sculpted mango on a stick and generally all very joyous. In the fall, one could of course witness the reverse. I've never made it. 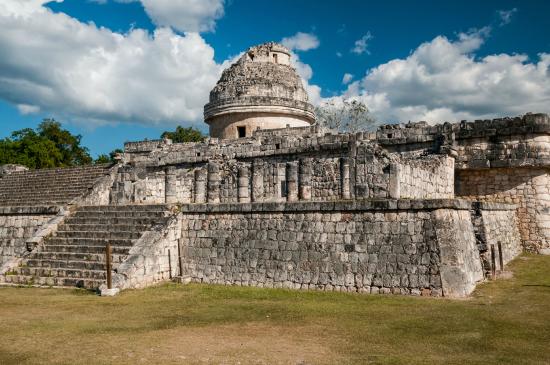 Not even considering the spiritual or mythic aspects to the experience, the mathematical precision that its builders exhibited in crafting the edifice so perfectly is astounding.

Caracol, the astronomical observatory named after the snail, harbored astronomers whose measurements were more precise than those taken by the europeans.

Their historical astronomical record was a thing of wonder. Sadly the building is now crumbling into oblivion. Glad I saw it when. 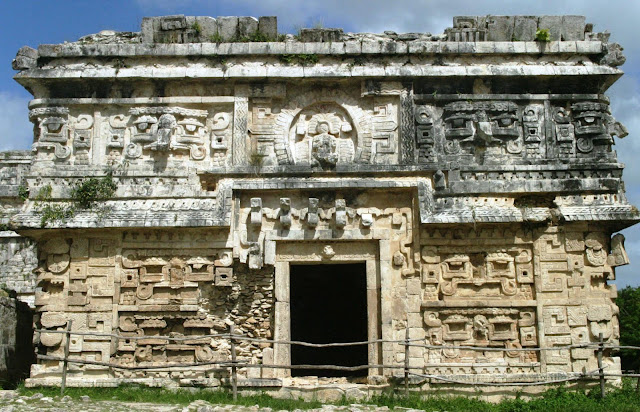 My favorite place was the Nunnery. I can't even begin to describe its strange magic but it bears little connection to any of the other buildings on site. The Nunnery dates to the late classic period, before the Toltec takeover of around 850 a.d. 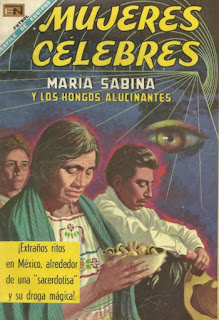 I bring up the whole subject because a very strange thing happened the other day, the very day after the feathered serpent of light Kukulkan manifested once again and tunneled his way into the earth.

A wind snake, or Kaan Ilk appeared, as it is called in the Mayan tongue, very close to the exact point on the pyramid where the snake of light appeared the day before. A young man, perhaps hoping to make contact, ran right into the center of the dusty vortex.

Some are saying that this whirlpool is another manifestation of the Mayan deity. A witness opined that "Kukulkan was mad." This type of phenomenon is several rungs higher than my pay grade but I do find the synchronicity quite interesting.

The worship of the plumed serpent was widespread, it reached from the Gulf Coast of Mexico to Mexico D.F. to Guatemala. 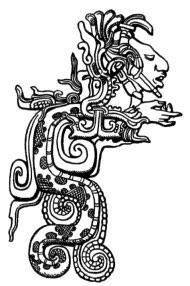 From Wiki: Stories are still told about Kukulkan among the modern Yucatec Maya. In one tale, Kukulkan is a boy who was born as a snake. As he grew older it became obvious that he was the plumed serpent and his sister cared for him in a cave.

He grew to such a size that his sister was unable to continue feeding him, so he flew out of his cave and into the sea, causing an earthquake. To let his sister know that he is still alive, Kukulkan causes earth tremors every year in July.

A modern collection of folklore from Yucatán tells how Kukulkan was a winged serpent that flew to the sun and tried to speak to it but the sun, in its pride, burnt his tongue. The same source relates how Kukulkan always travels ahead of the Yucatec Maya rain god Chaac, helping to predict the rains as his tail moves the winds and sweeps the earth clean.

We could use a just and angry deity kicking ass and taking names right about now.

Oh and oddly enough, Volcán Popocatépetl, the most famous and active volcano in Mexico, erupted 25,000' in the air on the equinox as well. Popocatépetl is considered the most threatening volcano in North America, in terms of explosive activity and population threat. 25 million people live within sixty miles of its base. Stay tuned.
Posted by Blue Heron at 3:07 PM

Carlos Castenada tells a story Don Juan shared with him that Mayan priests had a vision of the white devils arriving in boats to conquer their lands and as a result took millions of their followers through a portal into another dimension. Also, my Chihuhua's nickname is Quetzacoatl because when he's in a bad mood he's more like a rattlesnake with hair than a canine.