Word of the day 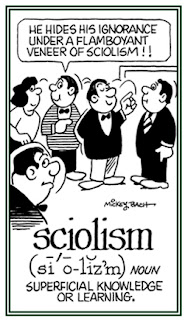 Ricardo sent a nice new word over, Sciolism. He particularly liked the quote at the end of the entry.

USAGE:
"This consists of some of the dullest sciolism in the history of prose, a standardized academic jargon and rhetoric, the dutiful rehearsal of received theory, and the deliberate misrepresentation of anything challenging or rejecting academic postmodernism."
Michael Donaghy; The Shape of the Dance; Picador; 2009.

A THOUGHT FOR TODAY:
Life cannot be classified in terms of a simple neurological ladder, with human beings at the top; it is more accurate to talk of different forms of intelligence, each with its strengths and weaknesses. This point was well demonstrated in the minutes before last December's tsunami, when tourists grabbed their digital cameras and ran after the ebbing surf, and all the 'dumb' animals made for the hills. -B.R. Myers, author (b. 1963)

I am a poster boy for sciolism. I always have said that my knowledge base was a mile wide and a quarter inch deep. But I didn't know there was a word for my condition. If you can use them without sounding too pompous, scienter, nescient, exscind, and adscititious ain't too bad either. I could probably work exscind into my linguistic quiver.
Posted by Blue Heron at 8:53 AM