My friend lives in a semi totalitarian country and I will redact both his name and the name of the country he lives in for security's sake.


Hi Robert, continue to enjoy your blog and photography, thanks.
Had a question on my mind for a while I wanted to float past your curiosity.
What role do you think intelligence plays in thinking a few steps ahead?
I often ask myself this when faced with the horrific quality of drivers here (highest per capita fatality rate in the world). While just as with the general concept of intelligence cultural factors and education (very limited here in the case of driver’s ed) play a part in both the reality and any individuals opinion about this, the general lack of foresight and anticipation is striking. Driving through the center of a blind curve and overtaking on those same blind curves is so commonplace as to leave me unsurprised as this point.
Any thoughts on this question!
Enjoy the snow capped peaks, Q

So my friend in Timbuctu wants to know why the drivers there are so bad? And if the people in his part of the world are just stupid or if there are other factors in play?


Well Q, you got me. But hey, everybody in the world thinks they have the worst drivers. In the United States, Boston is thought to be the worst place to drive, the drivers there will supposedly go out of their way to claim innocent pedestrian scalps. But you hear the same thing about New York, Chicago, Baltimore, Los Angeles... I honestly think the current problem is global in nature.

The most scared I ever got was driving in the mountains near Tecate and Rumerosa, in Mexico, where you only have to look down at the bottom of the steep mountain curves to see the twisted metal carcasses of busses and cars that never made it and now riddle the landscape. A good friend lost her son in such a place in Baja, it was my lot to drive her to visit the crash scene for the first time.

I think you are making an assumption about your adopted locale that is unfounded. The truth is, drivers suck everywhere these days. Your problem is generational, not regional. It is called selfishness. If you came back to the Estados Unidos you would be astounded by the very same crap that you bridle from over there in Ulaanbatar. Over the last six or eight years the new move is the patented cut across four freeway lanes to make an exit turn and pretend that no one else is there move. If you don't look at them they don't exist, that sort of attitude. Same people that pass you on the right shoulder and tailgate you in the slow lane. It is not that they are not thinking ahead, it is they are thinking ahead and have calculated that they can put the hurt on somebody else.

I look at it this way. Yes, the reverse Flynn effect is in full bloom, yes, we humans are getting stupider by the second. I have read various hypothesis for the root causes of the decline but don't think we need to get into them for the purposes of this conversation.

And I don't think the problem is necessarily one of intelligence. I think it is more a problem for the cultural anthropologists. Imagine that we are all honeybees in a big hive. Our systems require that we all exert a certain amount of civility for the various wheels to turn and society to function properly. But there are a certain number of sociopaths that don't give a whit about the consequences of their selfish actions; these tend to be the very same a-holes who pass on blind turns.

Why the disassociation from the herd? Why can't they see how their anti social actions cause a breakdown, in whatever arena they are wreaking havoc in? Well, you got me. Like my Professor friend from Stanford once told me, if there was no hell, we would have to invent one so that people would stop eating each other.

So you have a basic showdown between altruism and selfishness at play. People that care about the whole versus people only concerned about themselves. Here is how they break it down at the Evolution Institute:


The basic idea is that an altruistic behavior will evolve when the benefit that the behavior gives to the recipient (multiplied by the relatedness of the actor to the receiver) is greater than the cost to the actor. The extent of relatedness (sisters > cousins, etc) is critical for this to work. Basically, the equation says that altruism evolves when creatures are able to sacrifice for the good of their family.


...the mathematicians, led by Dr George Constable, of Princeton University in the US, now believe they have come up with a proof that explains why putting yourself out for someone else can be better in the long-run.
The process is so basic that it can be seen in the yeast fungus. It is capable of producing an enzyme that breaks down complex sugars in the environment, creating more food for all. But this means expending energy that could otherwise be used for reproduction, so a mutant strain of ‘cheaters’ that selfishly avoid contributing to food production would appear to have a distinct advantage.
However too many cheaters and the food will start to run out, causing the population to crash. A higher proportion of ‘altruistic’ yeast means there will be more food and a higher population.
So groups with higher numbers of ‘altruists’ are better able to survive the random catastrophic events that happen from time to time.

But selfish sociopaths can not be taught that, can they? Not in the hard wiring, I fear. 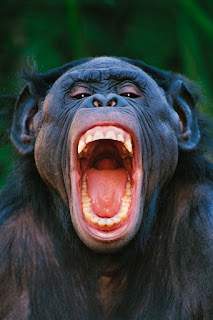 We share 99% of our genes with chimpanzees and bonobos. I was listening to a great interview with Anne Pusey, a student of Jane Goodall, recently on NPR. She was talking about the propensity for chimp clans to live together beautifully and wonderfully for years and years until a certain signal is given or a switch is flipped. Then they might revert to full scale aggression, killing their one time friends and playmates in a civil war. The Gombe War was such an event, it went on for four years.


A possible driver of such actions in both chimps and humans is what author Gregory Johnson, in the book Theory and Explanation in Archaeology (Academic Press, 1982) termed "scalar stress." This refers to difficulties maintaining or keeping track of relationships, particularly within groups of increasing size.
"There's evidence from several species of primates and other mammals that there's an optimal group size, which is reflected in reproductive patterns, stress hormones, and space use," Feldblum said. "Things may be more complicated in chimpanzees and humans, though."

I think we can learn a lot about ourselves from our simian cousins. We both have an obvious evolutionary hard wire for extreme aggression and occasionally anti-social behavior. We both have strong tribal and clannish tendencies that trump our normal moral code.

And my mind ever wanders back to various rodent experiments. Is the problem one of overcrowding or over stimulation? Mouse groups reveal complex relationships: Mice living together exhibited a social structure based on multiple-level interactions.


A common belief is that our modern, stimulation-filled environment encourages individualistic behavior (or anti-social behavior, depending on one's point of view), while simpler surroundings give rise to a more developed community life. New research at the Weizmann Institute shows that this assumption -- at least for mice -- is based in reality: Mice that have been raised in a stimulus-rich environment have less complexity in their social interactions than those growing up in more Spartan conditions.

Do you remember John Calhoun and the behavioral sink? Good old Buz Wolfe from Studio City.


John B. Calhoun, an ethologist, conducted research on the effects of population density in his 1968 experiment, the "mouse universe." He created a habitat for mice where the only restriction was space.He began by introducing four pairs of mice. The population reached 620 by day 315, after which the population growth dropped markedly. Between then and day 600, the mice's social structures and behaviors broke down. Breeding never resumed and behavior patterns changed.The conclusion? When all the space is taken and all the social roles are filled, competition and stress will be such that society will break down and the population will collapse.

Among the aberrations in behavior were the following: expulsion of young before weaning was complete, wounding of young, inability of dominant males to maintain the defense of their territory and females, aggressive behavior of females, passivity of non-dominant males with increased attacks on each other which were not defended against.

We now have a ringside seat at the behavioral sink. El jefe. The sink of all sinks. With global warming and species extirpation we will get to watch the last chapters in near real time.

I guess that I have wandered pretty far afield from my Antarctic friend's initial query. I used to think that the young people thought that driving a car was like playing a video game, watch people pass your bumper today going 85mph with inches to spare, with little or no concern for the danger they put others in. You get that way until you figure out the specific density of steel, concrete and asphalt for the first time.


I fear that they also probably intuit that the behavioral sink has already occurred, that it is simply too late for the species to save itself, there is a nihilist, Mad Max, post apocalyptic acceptance that we've passed the thanatic tipping point where the global community survives and many people of all ages seem happy to take an early, fentanyl fueled exit off the doomed rock.

In that mindset, with all the traffic lights flashing red, no one really gives a fuck about the consequences of their actions either.
Posted by Blue Heron at 6:43 PM

Mr. Sommers is in a happy mood! Tune in next week for tasty fattening overpriced meals.