As a U.S. senator, I cannot justify providing the executive with more ways to bypass Congress. Sen. Thom Tillis (R-NC) 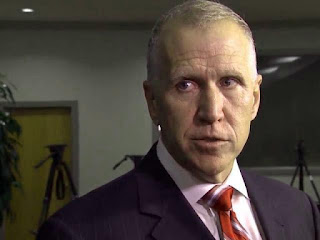 North Carolina Republickan Senator Thom Tillis was certainly adamant in his opposition to Trump's National Emergency declaration. It was bad policy and would likely come back to bite the party in the future.


Republicans need to realize that this will lead inevitably to regret when a Democrat once again controls the White House, cites the precedent set by Trump, and declares his or her own national emergency to advance a policy that couldn’t gain congressional approval. Sen. Thom Tillis (R-NC)

Empty words. Tillis's opposition lasted about as long as a fart in a windstorm. When push came to shove he caved like a cheap hooker chasing a sawbuck. So did Corey Gardner, Martha McSalley, Joni Ernst, Ted Cruz, John Cornyn and Ben Sasse.

Why the change of heart? Tillis claimed that he heard serious discussion that would prevent future left wing presidents from using the insidious power that he was now allowing Trump to use. One time only.


The concerns I’ve raised were never about what President Trump is trying to accomplish but rather with setting a precedent that a future Democratic president would exploit to bypass Congress to implement policies well outside the mainstream. Sen. Thom Tillis (R-NC)

As in; it's only okay when we do it. Purple state Republicans voted with Trump in every case except for Susan Collins of Maine. They were obviously more afraid of the GOP Trumpites and getting primaried than they were afraid of losing a general election, as Jonathan Bernstein articulately points out at Bloomberg.


There is no intellectual honesty in now turning around and arguing that there’s an imaginary asterisk attached to executive overreach — that it’s acceptable for my party but not thy party. Sen. Thom Tillis (R-NC)

Oops, changed his mind. These folks are a bunch of gutless wonders. They are so afraid of Donald Trump that they would sell out their mother, cross any ethical line for the opportunity to give their leader a fat smooch on the hind quarters. 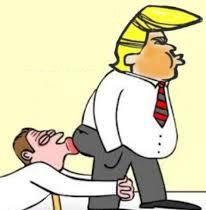 Salon has a good article that explains the phenomenon.


A national Quinnipiac University poll, released March 6, found that 66 percent of voters disapproved of Trump’s use of emergency powers to fund a border wall. But a different survey taken a few days later by Morning Consult found that seven in 10 Republican voters said they would be more likely to vote for senators or representatives who supported Trump’s declaration.

Rather than working on a moderate position that appeals to the majority of Americans, the GOP wants to double down on the hard right. Party over nation. It will be interesting to see if and how they get burned during the next election cycle.
Posted by Blue Heron at 5:27 PM

The easiest road in life is that wearing blinders, sleepwalking.

How soon we forget, or don't care...Obama was issuing emergency edicts every other
week cuz he couldn't and never did compromise in all of eight years. Cross the
aisle, come on. His arrogance was manifest.

And here the Donald proclaims one little emergency, that he should have done on the day he was sworn in, and hell hath opened it's yaw and poured forth the mighty armies
of dread.

Yeah, right, get over. He's the president and your not, losers.

Your is spelled with an apostrophe and an e in this case, Einstein. Come back after you finish vocational school. The topic was Tillis end around, sabe?