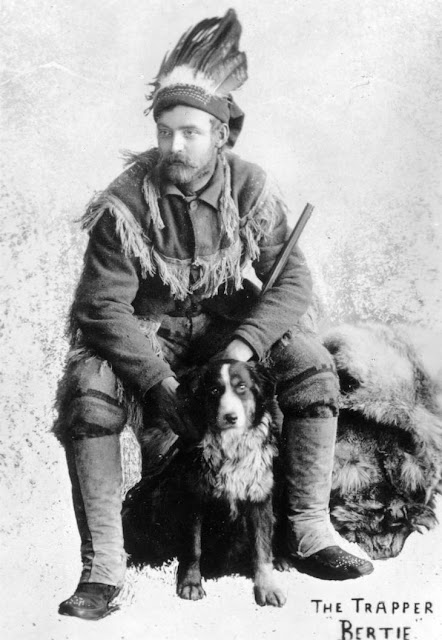 I have been doing some genealogical work and through a combination of blind luck and persistence have recently come across a lot of new information on my family line.

My father's mother's grandmother was Chana Chaja Grossbard. She was born in the mid 19th century.

I have known a little bit about this line for a while but have learned some new information.

Prior to settling in Poland, they came from Lithuania. We are evidently related to a famous rabbi, Nahum (Grossbard) Maggid.

And this really blew my mind, one of my distant cousins was the Colorado trapper and mountain man Bert Gross.

This is a picture of Bert taken from the Denver Public Library Digital Collections. Annotated on the back was this: "Bert Gross, around Crested Butte, early 1900s, carried mail from Crested Butte to Gothic one winter on snowshoes while Mr. Block was postmaster."

The photo was taken by Borg Mesch, a renowned Swedish photographer and mountain climber. The summary states: Full seated portrait of Bert Gross with a dog and animal skins, Crested Butte, Gunnison County, Colorado; his rifle leans on his leg and he wears a feather headdress, gaiters, wool pants and a jacket with fringe. The photograph was taken around 1892.

According to family researchers, Bert was born Grossbard and moved from Lithuania to become a trapper here. I never envisioned a trapper in the family but I think it is pretty cool. My late stepbrother David Fisher was a well known mountain man in Colorado, lived in Estes Park, worked as a printer, went to all the Rendezvous and was a very cool guy. I am going to try to find more information on Bert Gross, if possible. If you run into anything let me know. You never know what you will find when you start digging.

***********
postcript: I just received some information that Bert's father in Lithuania was a famous rabbi, Yehuda Leib Grossbard, known as the "Saint of Tavrig." He must have given his pop fits when he went native. Because I read that his dad, the saint, beat him and his brother, a fine cantor, for not entering the rabbinate. So he and brother Ben changed their names and split.
Posted by Blue Heron at 8:52 AM

That's a great and interesting story. Bert must have been a man among men!

At least a mensch among men.