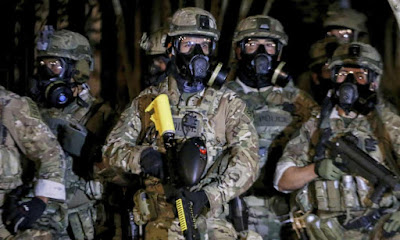 There is an interesting article at the Guardian - Camouflaged federal agents have descended on Portland. Trump's DHS is out of control. The Border Patrol are picking up, interrogating and arresting people without probable cause, far from the national border.

We had similar episodes happen a few months ago in San Diego, unmarked vans with insignia less agents randomly picking people off the street. They have blinded innocent people and inflicted serious injuries with "less than lethal rounds."

These secret police have gone after innocent people walking and peaceful protesters. They also have targeted journalists. I would say this is how the fascist state starts but it has been happening for far too long.

These are the same jackboots who clear a square of peaceful protesters with batons and tear gas based on violent actions of other people, on a completely different day, so that the President can hold his bible in front of a church and get his picture taken.

Amazing how quickly our legal rights vanish when the autocrats get scared.
Posted by Blue Heron at 8:44 AM

So funny to read your stand up routine in print...so anguished when 'innocent protesters' with interesting resumes get hauled off before they can burn and loot. The authorities do keep score.

Just wondering if you noticed the bottom line reported so far in Jessie Jackson's and Al Sharpton's (and George Soros') haul in the latest shake down of their protection racket.

All of these nice, pliable corporations, lobbyists, genial self-hating white liberals (are there any other kind?), and assorted rich have promised or already ponied up $1.4 Billion (that's with a B) for all the damage that 'whiteness' has caused the poor person of color ever since the expulsion from the Garden. One has to get a chuckle out of these folks believing in trickle down economics, only when it suits them.

But it's still just a down payment. And I'm still trying to get upset over a career criminal suffocating while resisting arrest, after passing a bogus $20 bill. But heroes come in all shapes and sizes, so your career race hustler has to seize the opportunity when it arrives. They all got caught flat footed when the prowler/jogger was shot in Florida. But they made up for it in Minnesota. And how!

Good! I hope they go in and shut down every destructive criminal in every city and arrest everyone involved with the criminal destruction. They are not peaceful protesters so don’t even try to defend them!! They should have read a little about our great Dr. Martin Luther King and taken a lesson on how to peacefully and civilly stage a protest to achieve great results. The destruction that they did enraged me to no end. Anyone who condones destruction in the name of protest and change is plain flat out wrong!

We have a right to peacefully protest in this country, didn't you hear? A lot of innocent people have been caught in their crossfire. there is also something called presumption of innocence and civil rights which is supposed to keep us from getting illegally pulled off the streets without probable cause.