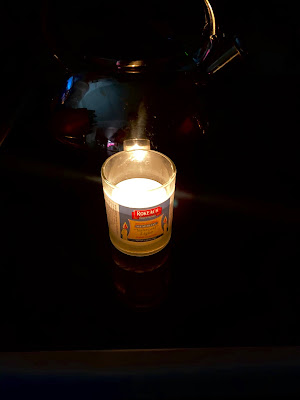 I was getting gas yesterday at Main St. and couldn't help looking at the fellow in front of me. "I know you from somewhere. You been in town long?" He told me that he had been in Fallbrook for thirty seven years, a shade less than I had.

I gave him the once over, he was thin and swarthy but his clothes were clean and his tennis shoes were new. Where had I seen him before? Was wracking my brain. I asked him his name and filed it away. He seemed pretty okay, moderately verbal but where in the hell did I know him from?

I left and drove away. It took a few minutes for me to process the information and for the light to go on. A heavily bedraggled version of this fellow can be sometimes seen standing in the middle of the street cursing, accosting, trapped in a heavily paranoid and angry schizophrenia.

Obviously he got some meds, got some help, got a haircut. Now he was just another guy and actually quite pleasant. On the depressive side of the bipolar roller coaster he was really a decent chap. Wonder if he knows where he has been? It made me feel good to see that he could come back to earth, gave me hope. He found his way back. Hope it keeps.

*
I have had a couple appraisals this week. One yesterday was for a woman I have known since I opened, now almost ninety. Her husband was a bank honcho, he found out he had lung cancer and they gave him a week to live. He died right when they said he would. She was a decorator and has some beautiful 18th century furnishings and paintings.

She has to downsize and I'm looking at a lovely French desk when she says that there is some sterling in the drawer and to check it out. I open the drawer and there, laying flat, is a photograph of President Trump. I looked at her and said, "Hey ___y, you don't have to hide this stuff on account of me. I don't care who you vote for or like politically."

She turned to me and said, "Well, the word is out that Leslie doesn't like Trump and I didn't want to upset you." I laughed. I guess with my wife's heavy Facebook presence and my blog, word gets around. Funny. Please, don't hide the pictures. It really doesn't matter to me.

*
We all have our tastes and there is no right way of thinking aesthetically. One man's trash and all that. Still, we all have our prejudices. And one of mine is an intense aversion to clown paintings. Underneath the pancake makeup of every happy clown lurks the deranged heart of a homicidal killer, at least in my book. Who can forget John Wayne Gacey?

Anyway I got to my appraisal last week, which was a freebie to a fellow merchant, and she started pulling clown canvases off of the walls and out of the closets until I was ready to plotz. And I may have said something intemperate, thinking that they were another family members but it turned out that it was her lifelong passion and I felt like a heel that needed to hurl. And need to tell her that the genre is dead and some of the very expensive ones are maybe worth a fifth of what they paid for them originally but you don't want to hurt anybody's feelings and I am trying to figure out how to do it with the least amount of trauma. What can you say? Tastes change and maybe some day this stuff will all be really valuable again. Then the joke will be on me. But if you want to know the real market for stuff like this, check ebay. It is all there with a big red nose in living color.

*
Was showing a print yesterday, walking it over to a friend, when the mat caught some air and it folded in half, a crease right down the pipes. Took it the restorer today. Will see what happens but boy did I feel stupid. Could have just pulled fifteen hundred dollars out of my pocket and lit it on fire.

*
My brother died three years ago today. The pain remains fresh in my heart. I think about him every day. Lift a glass, light a candle for Buzzy.
Posted by Blue Heron at 4:59 PM