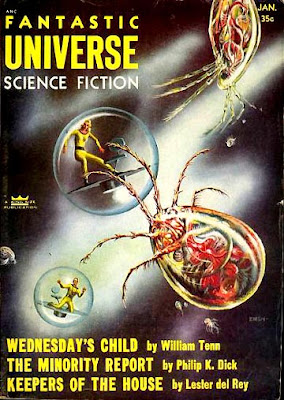 Philip Dick wrote a science fiction novella in 1956 called "The Minority Report" that described a fictional time where people were arrested for crimes the authorities thought they would commit in the future. This type of infraction was called "pre-crime." The book was turned into a decent Spielberg movie in 2002.

Now it appears to be happening in our lifetime, up in Portland. People arrested for crimes they have yet to commit.


Acting Secretary of the Department of Homeland Security Chad Wolf spun his unidentified federal agents’ random detainment of nonviolent anti-police brutality protesters in Portland, Oregon as some kind of pre-crime measure on Tuesday night.“Because we don’t have that local support, that local law enforcement support, we are having to go out and proactively arrest individuals,” Wolf said during an interview on Fox News. “And we need to do that because we need to hold them accountable.”

Holding people accountable for actions that have yet to occur? Really? Arresting people randomly and proactively because you think they will commit crimes in the future is one of the scariest and most un-american things I have ever heard of. Think about our civil rights and what it means when they are so casually suspended by the authorities? These protesters must look like criminals. Now illegal to wear black too, I suppose. Walks like a duck... This is the stuff of scary science fiction. Like tear gassing and beating certain people at a church in Washington D.C. because they were in the same location as people who broke the law there on a previous day. It doesn't make any sense.
Posted by Blue Heron at 7:19 AM

I know what you’re thinking tomorrow

So horrifying. I'm glad my husband, who was a screenwriter and interpreter of some of Phil Dick's work, did not live to see this day. Dick's world was his nightmare, and here we are.

Oh my goodness. This is not law. This is not order. This is Fascism.
Trump is like a cornered rat. I truly fear this could get very nasty, very quickly due to Trump's mental incapacity and fragility. I'm hoping we can manage, buy some time, and limp to the finish line this November - before we reach the point of no return. Maybe, with a thorough dosing of d-Con, and a healthy supply of Fabreze odor eliminators we can then summon the elbow grease needed to get back on track, and make things "As good as new!". What have we got to lose?

All the steps were already taken. Better to have this out in the open in July rather than November.