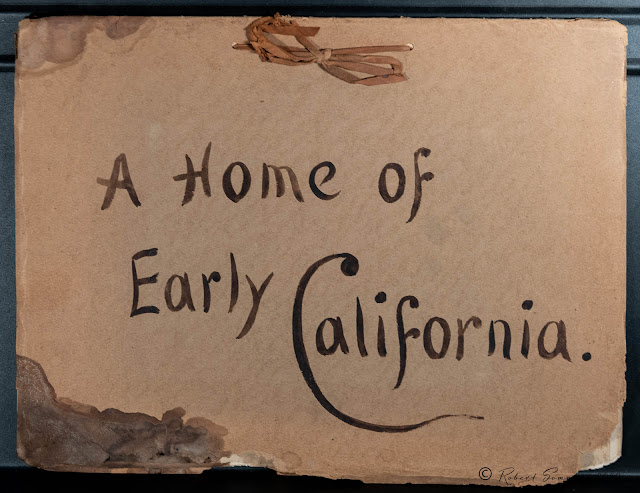 The Casa de Estudillo sits in Old Town San Diego. It was reportedly the finest adobe ever built in either Alta or Baja California. The land was claimed in 1827 by Governor José María de Echeandía and given to Captain José María Estudillo, an Andalusian who died a mere three years later.

Estudillo was one of the earliest settlers of San Diego. His son José Antonio Estudillo (1803-1852), who was born in Monterey Alta California, came to San Diego around 1820, when his father was Comandante of the Presidio.

The son constructed the U shaped adobe roughly around 1829. The younger Estudillo was the Alcalde of the town, a Spanish synonym for a position like a mayor today and he was also the tax collector and assessor. His land holdings throughout the region were massive and extensive.

Interestingly, Echeandía, as the first native Mexican elected Governor of Alta California, was active in both secularizing the region and liberating the indigenous natives who had been oppressed under Spanish rule.

He issued a "Proclamation of Emancipation" (or "Prevenciónes de Emancipacion") on July 25, 1826. All Indians within the military districts of San Diego Mission, Santa Barbara, and Monterey who were found qualified were freed from missionary rule and made eligible to become Mexican citizens.


The house was the center of social life in San Diego. There was originally a large cupola built on top for which the family could view the bullfights, fandangos and fiestas in the adjacent plaza or zocalo. The Estudillo home had a large room that served both as a town chapel and primary school.

The Estudillos lived in the home until 1887 at which time they moved to Los Angeles. It was at this point that life following art, the fateful decision was made to link the adobe to a work of fiction written in 1884 by the author Helen Hunt Jackson, Ramona. 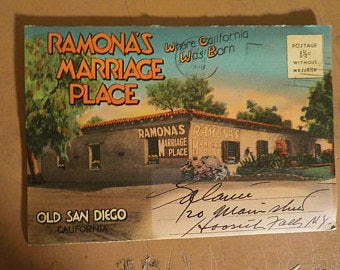 This book romanticized the native fictional heroine and the house was suddenly marketed as Ramona's Marriage Place to capitalize on the tourist craze and intense national interest in the book. 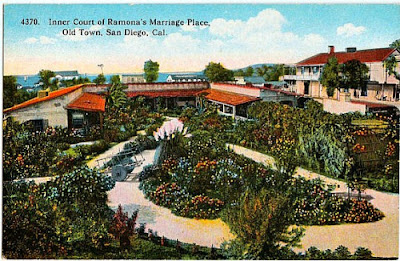 You can still sometimes find paintings and postcards depicting the lovely poinsettias that grew in the garden.


In 1887, a front-page article of the San Diego Union declared the Estudillo home to be "Ramona's Marriage Place", saying, "To sleepy Old Town (the house) is known as the Estudillos, but the outside world knows it as the marriage place of 'Ramona.'" This was despite Jackson never having visited the house, but in the novel, Ramona was married in a "long, low adobe building which had served no mean purpose in the old Presidio days, but was now fallen in decay; and all its rooms, except those occupied by the Father, had been long uninhabited." Despite the novel being a work of fiction, visitors flocked to the building thinking it was the actual location of Ramona's marriage. To be clear, the Union did not simply invent this story; a tourist had already scratched the name "Alessandro" (Ramona's husband in the novel) in one of the walls.The caretaker decided to capitalize on the attendant publicity and began selling off pieces of the house as souvenirs. Naturally, the building's condition began to deteriorate rapidly.

The town cashed in on a good thing, a fact that reportedly bothered the Estudillos, who had by now moved up the coast to the City of Angels. Prominent San Diegan and sugar baron John Spreckels bought the building in 1906 through his agent Nat Titus for $500 and he hired a 43 year old widow named Hazel Waterman to restore the building, which had fallen into intense disrepair through vandalism and neglect, to its original glory. Waterman was the daughter of a former Governor, Robert Waterman, and worked for the great architect Irving Gill.

Waterman did an amazing and historically accurate job in restoring the structure, complete with soaking rawhide strips to secure the vigas or roof timbers. Please read this excellent article on the Estudillo House in the Journal Of San Diego History for much more on the subject.

In 1909 Spreckels hired a theater impresario and onetime minstrel named Tommy Getz to turn up the noise on the Casa's linkage to the Ramona fiction. And that he did, to many people's apparent consternation, including the Estudillo family.

True or not, the Ramona myth was a big hit with the muggles and over 125,000 people visited the adobe during the 1915 Pan Pacific Exposition.

I wrote this prelude and hope that it is not too exhaustive, for a reason. I recently obtained a magnificent folio of silver gelatin photographs of the Casa de Estudillo by the early San Diego photographer Harold Taylor (1878-1960.) Taylor was an Englishman who  lived in Coronado and printed this folio at his Three Arrows Studio, which may have been located in the Hotel del Coronado. They are still in the original hand lettered binder. I wonder if any others exist?

I have been told by local historians that they date from around 1910. It is possible that some of these nine photographs are entirely new and fresh to the public domain. Please correct me if I am wrong. One photograph is apparently missing from its tipped in page. They are all pencil signed Harold Taylor, Coronado. 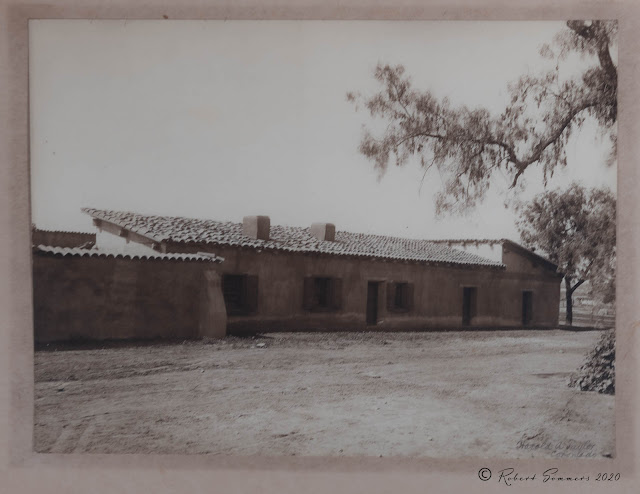 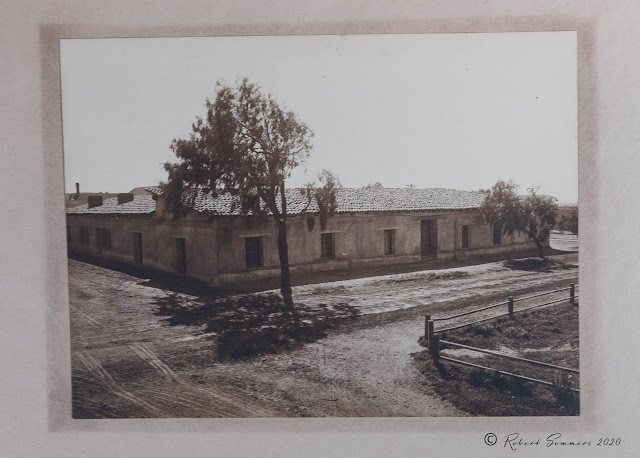 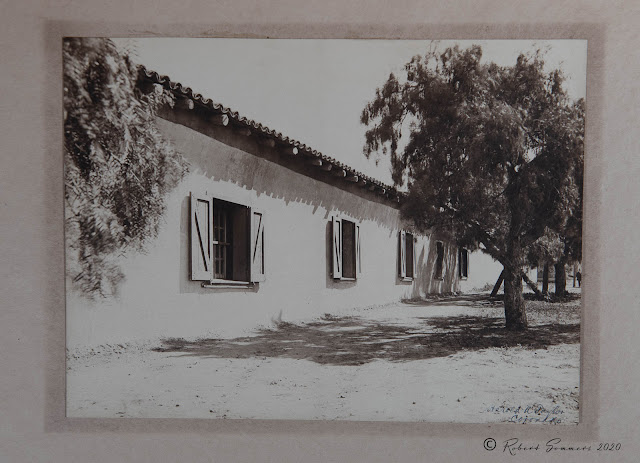 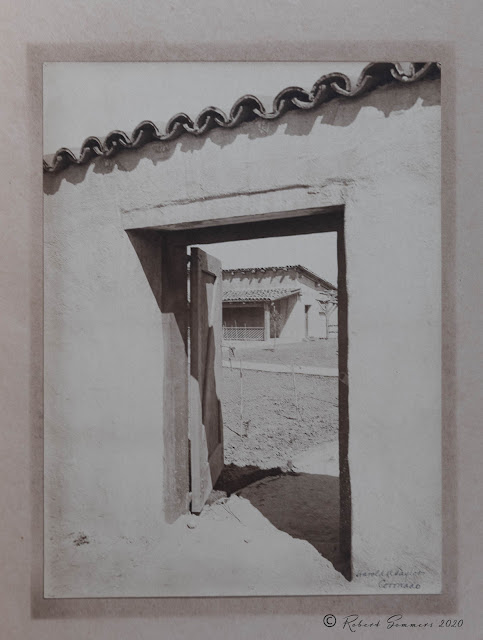 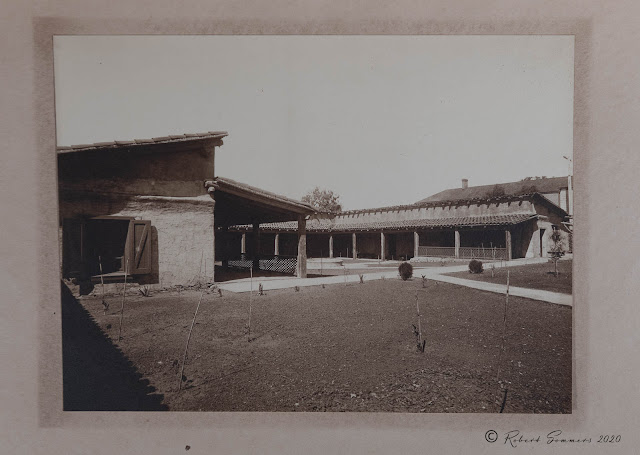 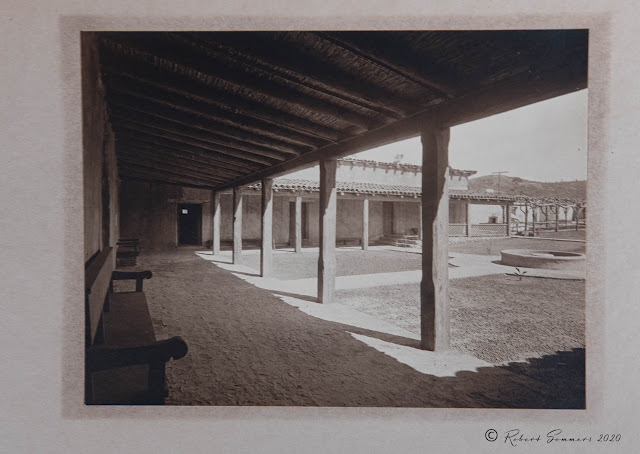 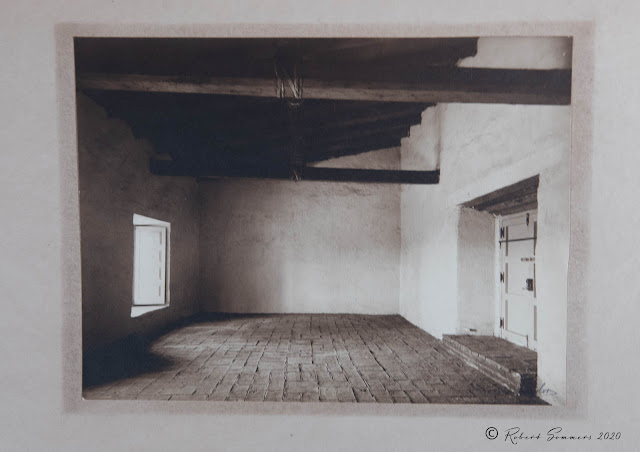 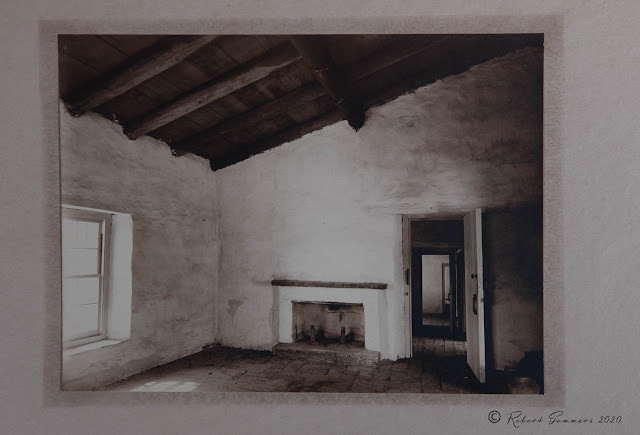 These photographs give us a great view of Waterman's restoration work. It looks to my unlearned eye to be pre Getz's "Disney" version. I have been on a San Diego history bent of late and hope that you find as much beauty in these magnificent reminders of our rich historic past as I do.

The folio is for sale but I would like to keep it intact.  I hope that you enjoy the pictures.