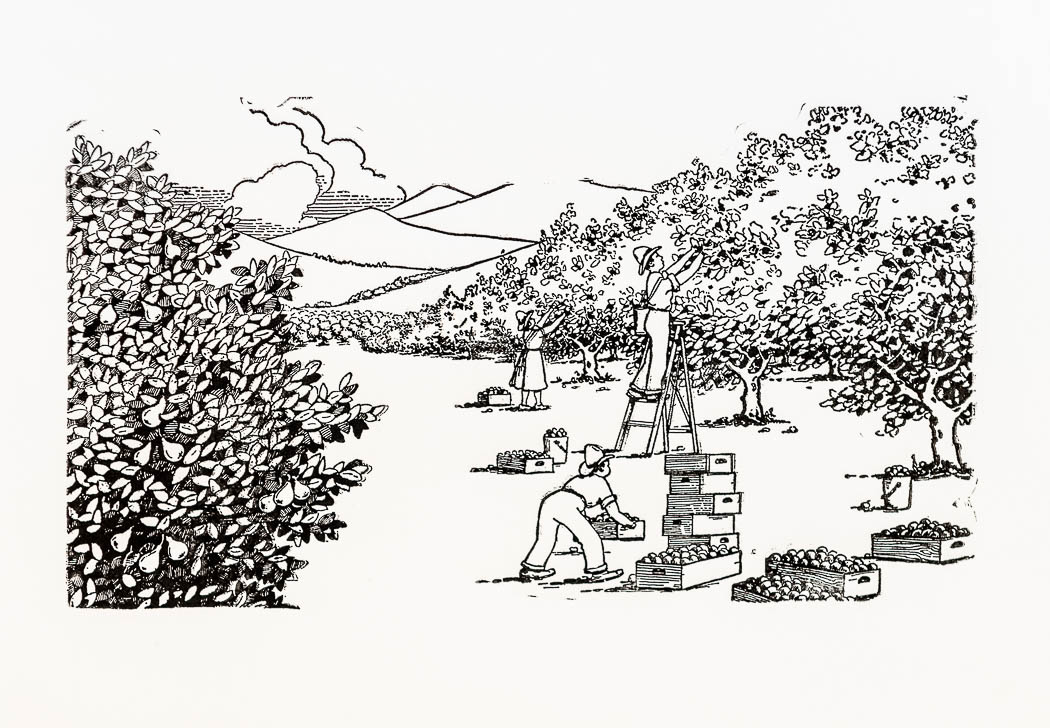 My source for the old printing blocks brought five more woodblocks over the other day. All continuing with the early California theme. These blocks were quite a bit larger than the last batch. They were clearly done by different artists. One has a 1920's union label impressed in the block.

Printmaker Dixon Fish had some time yesterday afternoon and he called me over to the Fallbrook School of the Arts. He mixed up the ink and we printed up the new batch. The man who loaned me these says that he was told that not many of these pre World War II blocks survive, they were repurposed for some reason in the war effort. I do not know but have seen more than a few in my years.

I really like the print on top. I suppose that it could be avocados but I am going with pear picking. I really like the old timey staccato cross hatching at the bottom of the clouds as well as the old style hats. This one would be nice to color. 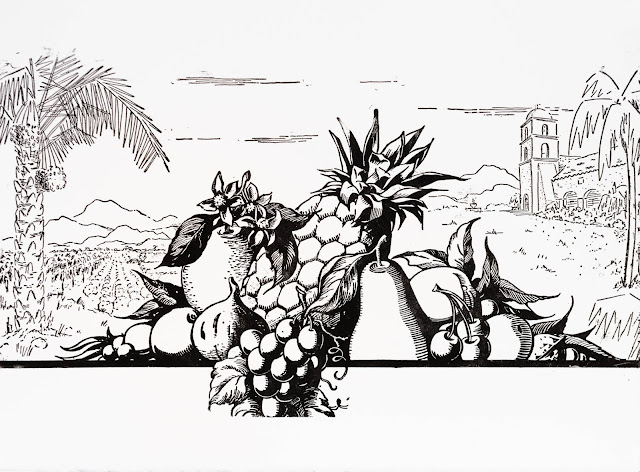 Here we see the fruit of the missions' labor, with the phoenix canariensis planted clearly in view.

While Serra was supposed to have brought the phoenix dactylifera or date palm, in 1769, that may not be entirely accurate and there is no record of the Canary Island palm arriving until the 19th century.

The ﬁrst nursery to offer phoenix canariensis for sale in California was the nursery of Miller and Sievers in San Francisco in their 1874 catalogue.

In any case, you most often see the native washingtonia filifera palm illustrated in these sorts of illustrations.

The pineapple I believe is purely artistic license. Next we have two rancho fiesta scenes. The lower one is earlier and bears the union printing cartouche. 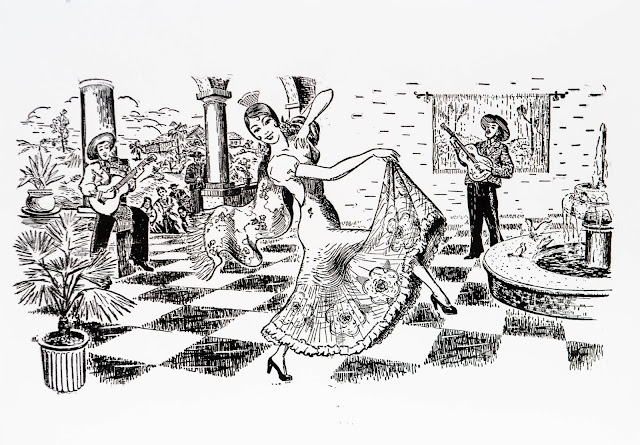 For some reason I think that the block above was created by a woman but I could be wrong. Something about the line work. 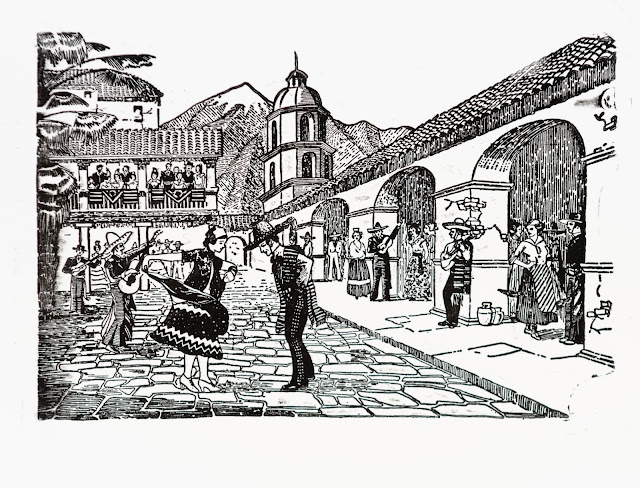 The bottom fiesta scene is very tight, intricate and pretty well drawn. Can't help but think that the dancer with the sombrero bears a resemblance to Dick Tracy. Very nice print.

The desert view looks like it might have been created to illustrate different types of desert flora, saguaro, yucca, ocotillo, beavertail and barrel. 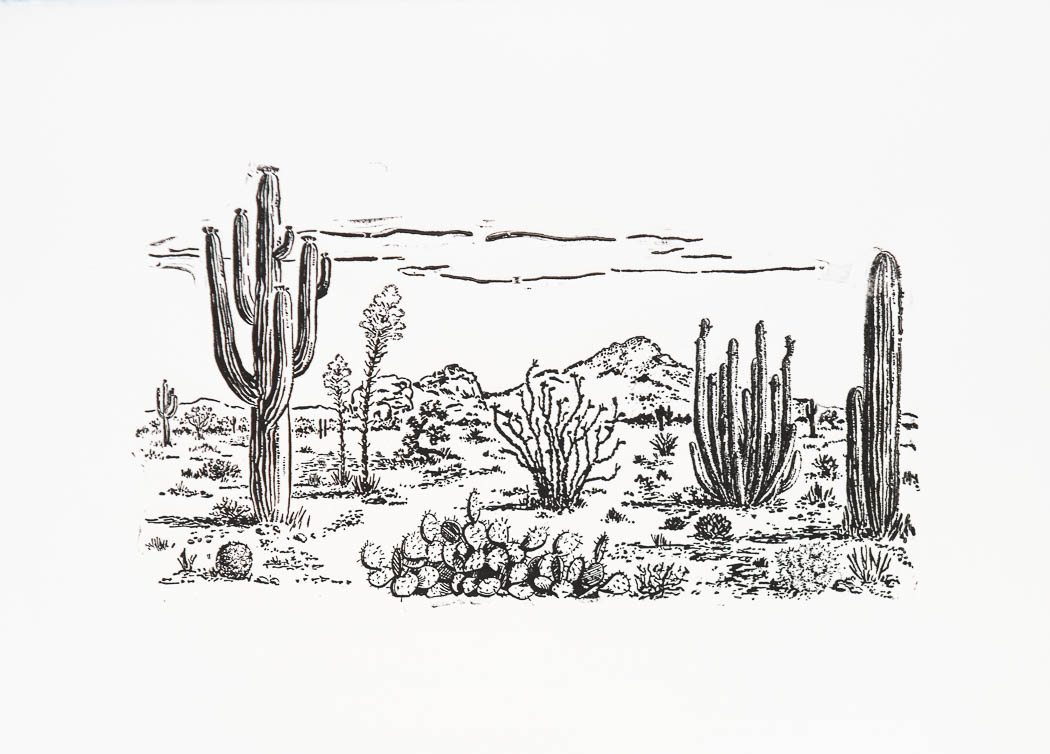 I am going to run a limited edition of these prints one of these days, on good hand torn heavy paper. These are test prints and we will try to make them as perfect as possible. They will be signed by the printer. The cost will be fifty dollars per print and a little less for multiples. Let me know if there is any interest in these or the original batch. We can even do them in custom colors, I believe. They will look very pretty framed up.
Posted by Blue Heron at 3:04 PM

What a lovely blast from the (Mission) past. Would agree that first print looks more like pears than ‘alligator pears’.

Hi Robert,
I’m still deciding on my favorite but please count me in on the print run. It’s a tough call between the Redwoods with that Packard & the lovely ones you posted today. Let us know when you need me to make a decision & send $.

I would also be interested in a purchase. Let me know when you're ready to roll...