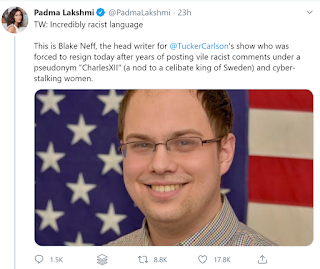 Tucker Carlson has been spouting racist, sexist and offensive twaddle since he has been on the air. Yet he claims to not be a bigot.

Now his head writer, Blake Neff, has been outed as a racist cyber stalker and a misogynist incel.

The higher ups at Fox are not happy about this development and have promised that Carlson will explain all this away somehow Monday night on his show. Boy has he got some 'splaining to do. We tend to judge people by the company they keep. And Neff is not the first racist in Carlson's employ.

Neff is on record as saying that whatever Tucker reads off the teleprompter comes right off his keyboard. Carlson hired the Dartmouth chum when he ran the Daily Caller, which he co-founded. They are like each other's intellectual doppelganger or soulmate.

So what can T.C. say? Defend, bury or run away? He can try to completely plead ignorance and disassociate himself from the racist swine but that might be difficult considering they are as tight as your shadow. He can throw him under the bus and feign shock. He can say that everybody is a racist and sexist and it is not really a bad thing although the honchos might not want to hear that right now. He can fess up and admit that he agrees with him but that isn't going to happen or the odds are short of that happening because it would require too much honesty.

So what does he say, what can he say, besides blaming the left for everything  that has come down, which is a given. When victimizers are cornered they usually magically turn themselves into victims in a split second.

Should be very interesting.
Posted by Blue Heron at 12:12 PM

Easy: It is Obama's fault.