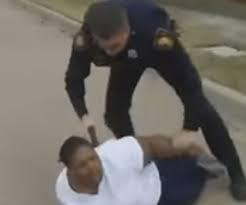 A seven year old accidentally dropped raisins in a neighbors yard. Neighbor grabs and chokes the kid and then calls the cops on the "littering."
The thing escalates further out of control, cops arrive and the officer uses a "pain compliance maneuver" to force information from the kid's sister, who was recording the event.

Fifth Circuit has no problem with it. Read the sad, sordid story, Fifth Circuit approves a cop's violent response to a dispute over a seven year old's littering.

In December 2016, Jacqueline Craig told police that a neighbor had choked her 8-year-old son [ed. note. 7?] for littering. Rather than take the allegations seriously, Fort Worth Texas Police Officer William Martin interrupted Jacqueline to ask why she didn’t teach her son not to litter; he then suggested the neighbor’s violence was justified because her 8-year-old “broke the law.” When Jacqueline objected to the officer’s suggestion, Martin warned that if she kept yelling at him, he would arrest her for “piss[ing him] off.”