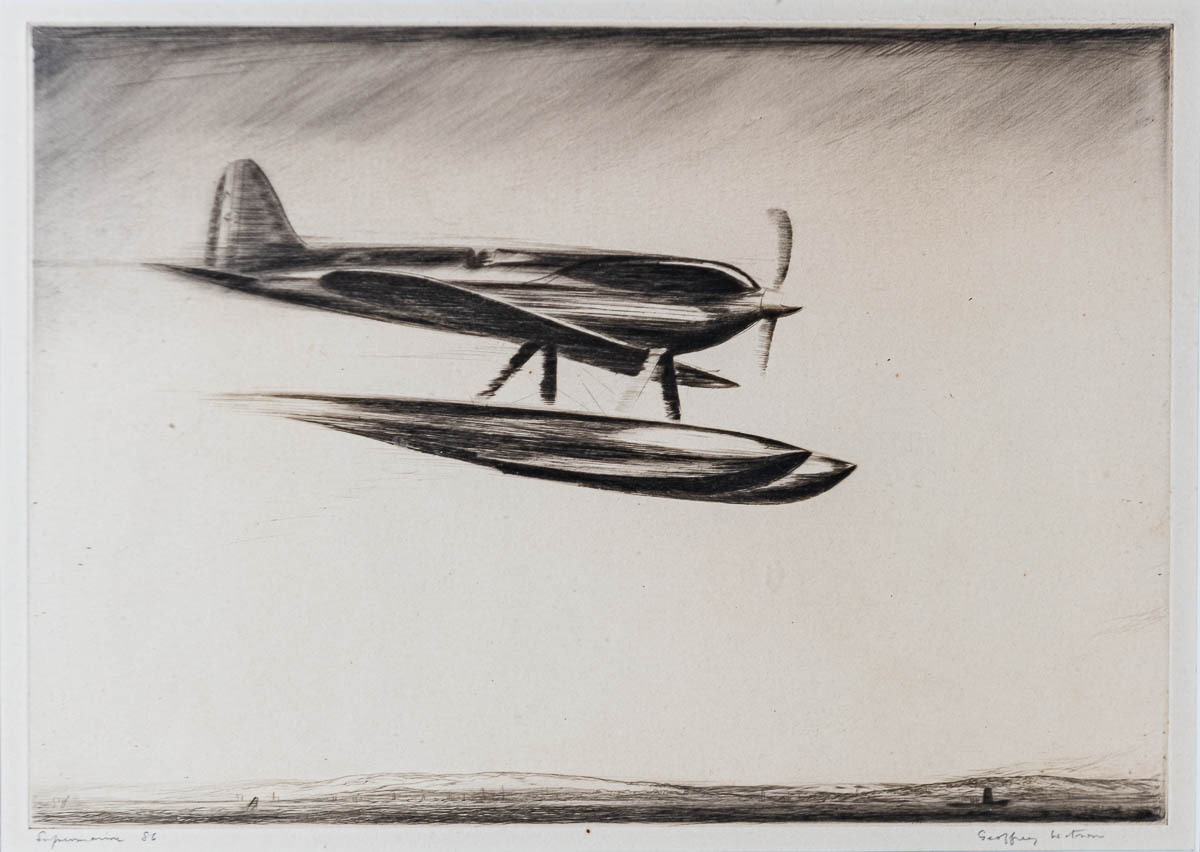 I had some great finds at the Long Beach Flea Market last Sunday. One of the nicer things I found was this print. I bought it for a song, instantly loved it. Gorgeous work! 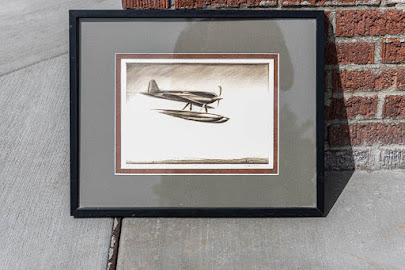 This drypoint and etching was created by an artist that I had never heard of, Geoffrey Watson.
The print evoked speed in a very art deco style, reminiscent of the work of Otto Kuhler or Thomas Hart Benton.

I looked up his work on line and discovered that he was a British artist born in 1894 who specialized in aviation art but there were no other prints in his catalogue that looked like this one, which I could find no record of.

Most of them were frankly, more pedestrian in execution.

There was this painting below, however, which looked quite similar. Was this the same aircraft? 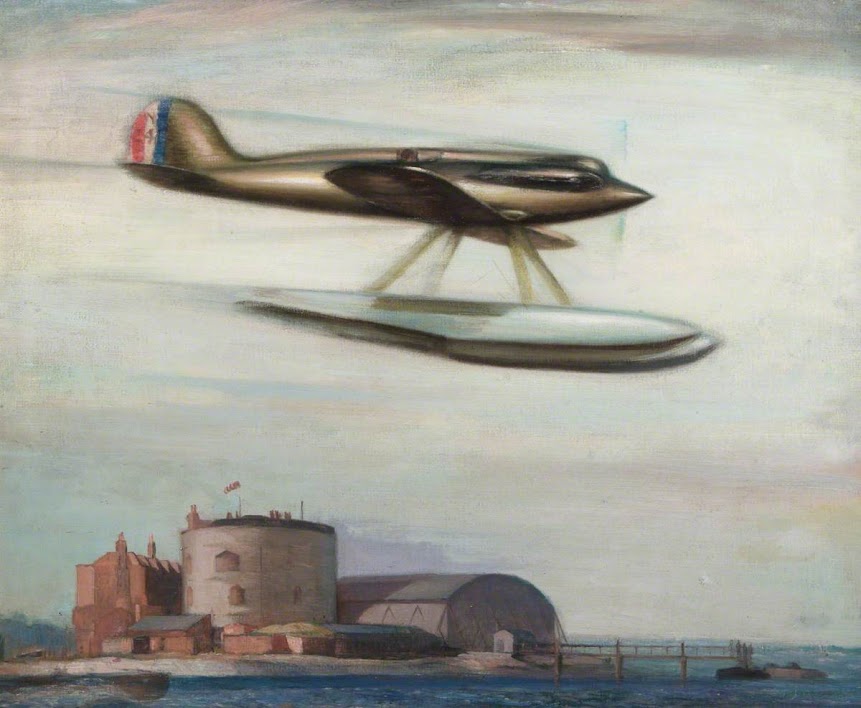 The painting is titled Gloster VI and is held at the Royal Air Force Museum in Edgware, England. Interesting to me, the website says that the artist died in 1937 but another reference I found said 1979. Will have to figure that one out. Great painting in any case, beautiful.

I sent the images to my friend Ken, a longtime pilot, and he sent me back this note:

The aircraft is likely the Supermarine S.6.  One of a series S.4 – S.6B built for the Schneider Racing Cup in the ‘20s. One of the most distinguishing characteristics in the series is where the cockpit is located.

This was very helpful as I could now match the title. It wasn't a date after the title, it was the plane model designation, the S6. Best part of my job is the research part. Anyway later in the day another pilot friend stopped by, J.B., and he confirmed what Ken said about the plane being a Supermarine and he showed me the subtle physical differences with the Gloster.

Yesterday morning I sent a note to the Royal Air Force Museum and received three emails this morning, including his extant print catalogue, correspondence of which I partially include here:

I recently found this etching of a Supermarine by Geoffrey Watson. I have not ever seen another copy. I notice that it is very similar to a painting in your possession, the Gloster VI. Do you know when my print was executed and do you have any more information about it. (Can’t quite make out the date.) Please let me know if you have ever seen this particular work before and if it is the same craft.

Thank you for your email, which was passed to me from the Ask Collections team.

Indeed, the Museum possesses an extensive collection of Watson’s etchings. Please see attached list, which includes long-loaned items to the Museum from the Royal Aero Club, as well as the Museum’s own collection holdings.  These are lovely etchings and drypoints, and you will see one of the Gloster VI which we hold (in addition to the painting).

We do not have an impression of the etching you mention, unfortunately. But it would be dated to between c.1927-1929, judging by the aircraft – it had taken part in the Schneider Trophy Race of 1927, and on 12 September 1929, flown by Augustus Orlebar, it had achieved the air speed record. Only two days before the Supermarine achieved that record, on 10 September 1929 the Gloster VI had achieved it – both races being in Calshot (near Southampton) – and you can see the coastal references in both of the images. It is interesting that the Gloster VI image was the one Watson painted, although I would not know if the edition of Gloster VI exceeds the size of the Supermarine’s editioning – there seems to be no edition number noted on your etching, and indeed it was not especially common in those days for artists to note edition numbers; this developed more into the century. It is important to remember that Watson was a graphic artist and illustrator who produced these aviation prints for journals such as the Graphic and Illustrated London News, as well as for books of the interwar period – and so consulting these would likely help you ascertain whether the Supermarine was reproduced. The British Library would be able to advise you further about the availability of these periodicals in the St Pancras reading rooms – I recommend you consult those from that time in mid-September 1929.

Unfortunately, I cannot determine, for your comparison, which other collections feature Watson’s etchings (the Science Museum was an obvious place to look but surprisingly it does not feature any) – works on paper have not been digitised for the Art UK project which features oils and sculptures, mainly; though it is more likely that multi-collection museums, rather than art museums, will feature Watson’s works. But it might be worth you contacting Dominic Winter, the auctioneer, and the dealer Liss Lewellyn, whose specialists are more likely to know of Watson’s wider oeuvre and possibly the extent to which your impression of the Supermarine is ‘rare’. I am aware, furthermore, that Liss Lewellyn are in touch with the daughter of the artist, Lucinda Hall, who may be able to advise you from the perspective of Watson’s estate and extant impressions they might hold of the Supermarine.  Likely they would have catalogued their collection of the prints – this seems like a good place to start, if you are determined to nail the answer to your question.

I am cc’ing my colleague Andy Renwick, Curator of Photographs, in case he has any further suggestions – as an art historian, rather than a military enthusiast, I am not a specialist of aircraft, so he might shed further light on the subject for you.

I hope you get to the bottom of this. I would be curious to know what you find out.

Shortly thereafter I received this from her colleague:

The hint of a four on the rudder and number on the fuselage suggest that Watson’s print represents Supermarine S.6 N247, flown by Waghorn in the 1929 race at Cowes and declared the winner.

I hope this helps alongside Julia’s information below.

Well, hot diggity! Thanks to these wonderful curators from far across the large pond, I now had a plane, a date and a race. The plane is most probably the very Supermarine flown by Waghorn in 1929 to win the race at Calshot. From the link; the two S.6 racers were entered into the 1929 Schneider Trophy at Calshot, England. N247 came first piloted by Flying Officer H.R.D. Waghorn at a speed of 328.63 mph (528.88 km/h).

I wrote the dealer that the kind woman suggested and he also got back to me promptly, letting me know that he had never seen the image before. I have no idea how many impressions in this open edition were actually pulled but there could not have been too many. Rare is good.

I am not sure if I will put the piece up for auction or sell it privately but told the Museum that I would let them know when I put a number on it. Will be interesting to see where it ends up. Best part of my job is that you never know what will turn up. Always have to keep your eyes open in this continual treasure hunt I am involved in.

Any more information about this particular print or plane will be gratefully accepted. Thanks to all of those wonderful souls that helped me research my artistic quarry.

A beautiful etching, and a wonderful adventure finding out about it. ~ Diane O

Nice!
Somethings that I'm always interested in: the print would have been done on copper and the image reversed - so was the painting done after the painting and since the "drawn" lines (in the sky) go from upper left to lower right (they would be reversed on the plate) was the artist left handed?

Love the design and energy in the print… you can feel the speed! And to have received such informative and beautifully written notes from the curators in England made the story so rich and a fun discovery! Hope they might acquire it for their collection.~LL

Great article ,the reason the Supermarine is on floats is because of short runways in those days , the propeller was a fixed one, so it took a lot of distance to get enough speed up before it could be airborne, thus water , but once it got going it was fast, it was the design that saved Britain from speaking German in ww2, the Spitfire!

Ah... this reminds me of when I sold Old Master prints & drawings in my Philadelphia shop. Dealing with customers was necessary to make a living (I eventually had staff for that) but the research was the exciting part - pre- Internet, as well! Good on ya'!

Mr. Anonomous #4, the reason it was a seaplane because it was built for a "seaplane race" And it was the design that later led to the famous Spitfire, but it is not a Spitfire.

Ken is right it was originally a seaplane race but as the planes get more powerful it became the only way the faster planes could have enough runway as the prototype of the spitfire as in picture would almost require 2 miles, that's over 10000 feet. No runways were that long back then and the variable pitch propeller was not perfected then. Its like having a bike race with a 10 speed and starting off in high gear, it would take a long time to get up to speed and use a lot of pavement, so thus they had to use floats , which incidentally caused a slower speed than they were capable of because of the drag of all the weight and non aerodynamic properties of floats, finally when the adjustable propellers became available the float race went way of ox cart.