Lara Logan goes after you know who... 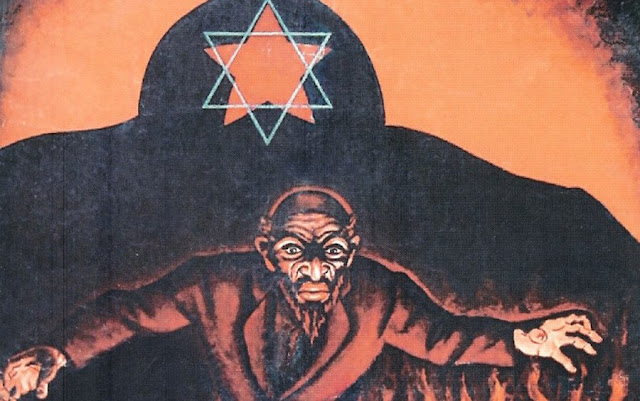 Fox Nation host Lara Logan used her Gettr account to promote a piece that claimed that Jewish people are behind “a one world government" and “central banking and big corporate money" and are the “divider and conqueror” and “the aggressor, yet always the victim." The post Logan shared also claimed that the Rothschilds engineered the U.S. Civil War and the assassinations of Presidents Abraham Lincoln and John F. Kennedy, and that Russian dictator Vladimir Putin purged "the Rothschild money changers.”

And there's this one. The jews are responsible for the evolution conspiracy too? Well, maybe not all of them, but definitely those damn Rothschilds again.
LARA LOGAN: What is the only thing on Earth that is actually renewable? It's life. And they can, you know, go back to the big-bang theory and Darwin. I mean, when I found out, does anyone know when, who employed Darwin? Where Darwinism comes from? Well, I mean, you know, look it up, the Rothschilds. It goes right back to 10 Downing Street and the same people who employed Darwin and that's when Darwin, you know, wrote his theory of evolution and so on and so on. And I'm not saying that none of that is true. I'm just saying Darwin was hired by someone to come up with the theory. Right? Based on evidence. OK, fine.
How come the secret globalist cabal never lets me get in on the action? What am I, chopped liver?
*
Aside from antisemitism, Logan has also been spreading Russian propaganda since it invaded Ukraine, blaming the invasion on Ukraine and claiming that Russian President Vladimir Putin is the "man standing between us and the New World Order."
I was messing around and designed a new t-shirt. I used to like her reporting... now Lara is just another nut!!

I want one of those t shirts

I just created them as a mock up but maybe not a bad idea...