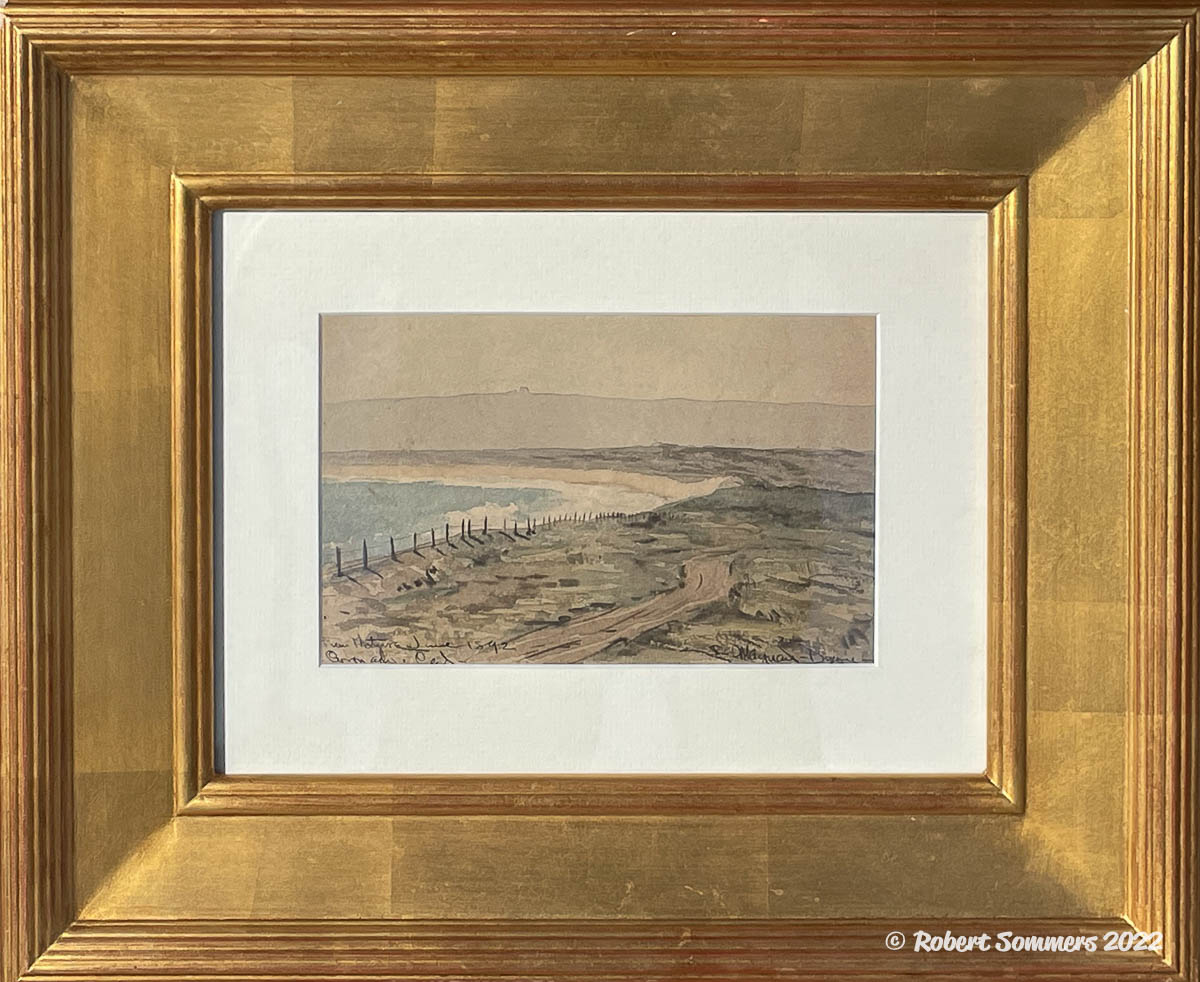 I have been buying and selling artwork since 1975, my first purchases coming from one rather famous scribe, historian and wonderful dealer, Gordon McClelland.  That means that I have been buying and selling paintings for what I consider is a very long time. Thought I knew it all once but I was sadly mistaken...
In any case, one of my foci and specialties has been dealing in artists from my native San Diego County.

I have sold all the greats of San Diego at one time or another, the four so-called deans of San Diego art, Fries, Braun, Mitchell and Reiffel, as well as the leading women, like Anni Baldaugh, Belle Baranceanu, Rose Schneider and Klauber. Other greats include Everett Gee Jackson, Baldessari, Hocks and Hord and I have been lucky and fortunate enough to sell works from them all. 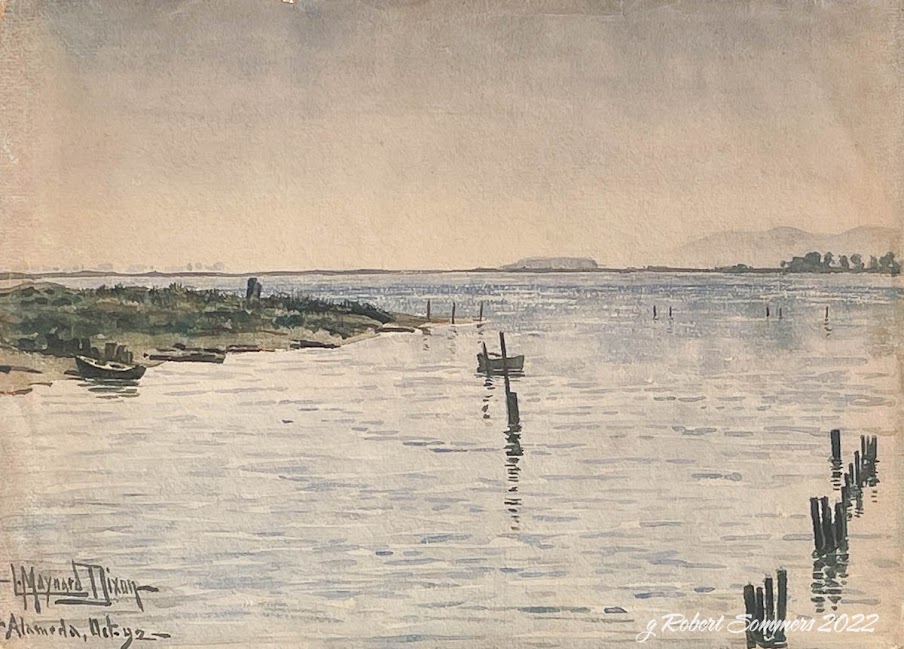 I bought two watercolors with a partner in San Francisco a few weeks ago and picked them up at Modernism. They were both very early works by Lafayette Maynard Dixon (1875-1946), painted while he was still in his teens. Dixon is one of the titans of southwest art, I should note that three of his works have broken a million dollars at auction, the highest being a princely sum of $1,680,000 in 2005 for the work Storytellers. I have no idea what they have traded for in private hands.

I have been privileged to sell some very nice Dixon's in my time, one that landed very close to the front page of one of Gerry Peters's books on Dixon but nothing remotely in the aforementioned league.

Anyway, back to the matter at hand. These new early works of mine and my partner were both ostensibly from Alameda in the East Bay, executed in 1892, roughly the year that Dixon first took classes at the School of Design in San Francisco.

One was dated June and one October, 1892, both were views of Alameda Bay.

Or so I thought. 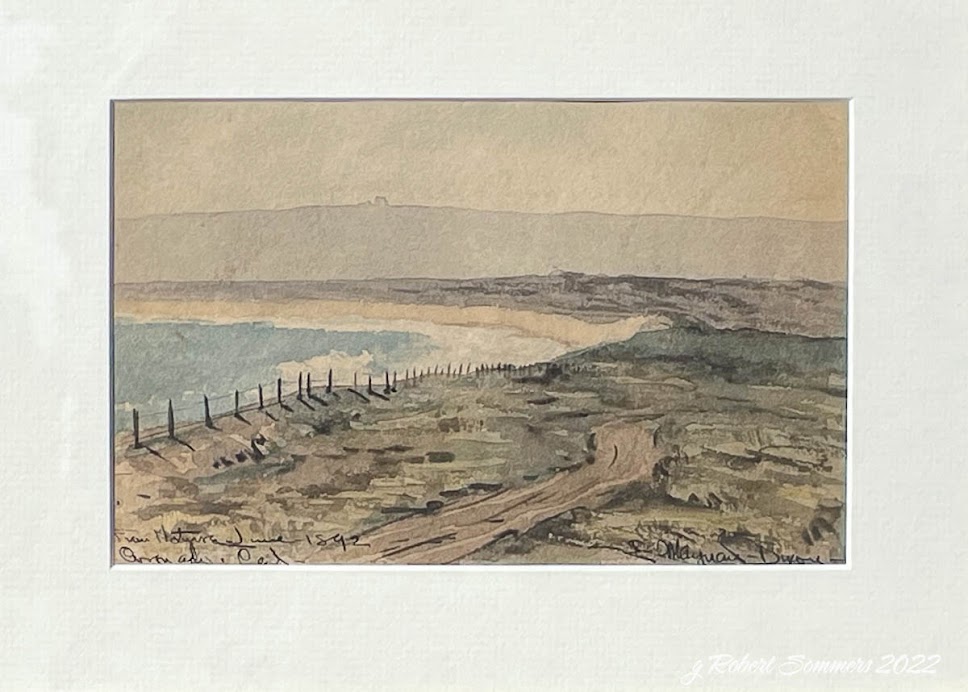 I sent the watercolors to my conservator for cleaning (they did a marvelous job) and lo and behold, the smaller early work is from San Diego county, more exactly, from Coronado Island. I had misread the wild cursive script Coronado for Alameda and never caught it until a week ago when it came out of the original frame. 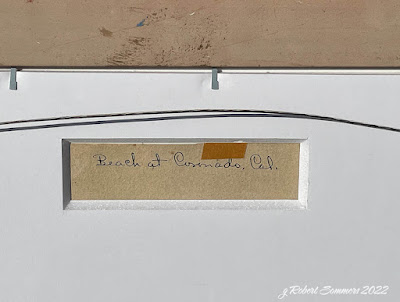 The front actually reads From nature, June 1892 Coronado CA. To the right is his signature, Maynard Dixon, in the same black ink. Verso is inscribed, Beach at Coronado, Cal.

I am embarrassed to admit that I had no idea that he ever lived here, let alone painted here, especially at the ripe young age of 17. But so be it. This might be one of the earliest works of Maynard Dixon that has ever surfaced.

Now let me be clear. I do not think these are artistic masterpieces but I find them both lovely and curious from an academic standpoint and a case can certainly be made that his star and acclaim overshadows any of the other local masters of painting that I have previously mentioned.

And this whole quest has sent me down a nice little rabbit hole of exploration, one that I have just started to tread. What was the nature of the young Fresno native Dixon's appearance in San Diego County?

From Jeff Mitchell's website, (which includes an excellent early Coronado work from the same year)

As a somewhat frail child, Maynard Dixon was often left to his own devices and by the age of 6 had begun to draw, letting his imagination take him through the western landscape. In 1891, Dixon’s father had suffered a nervous breakdown, motivating the family to move to Coronado near San Diego to provide a more peaceful environment.  That same year, Dixon had impressed the famous illustrator Frederic Remington with a portfolio of his work, receiving an encouraging response, and the advice, “… copy only from nature.”  Quitting school, Maynard immersed himself in further improving his drawing and painting skills, exploring the region.

Much of his earliest work was destroyed in the 1906 San Francisco fire... 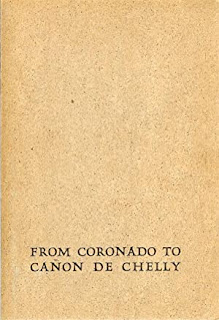 Richard Dillon wrote a book on Dixon in 1976, MAYNARD DIXON, Or From Coronado to Cañon de Chelly., which I have not yet read but plan on finding. 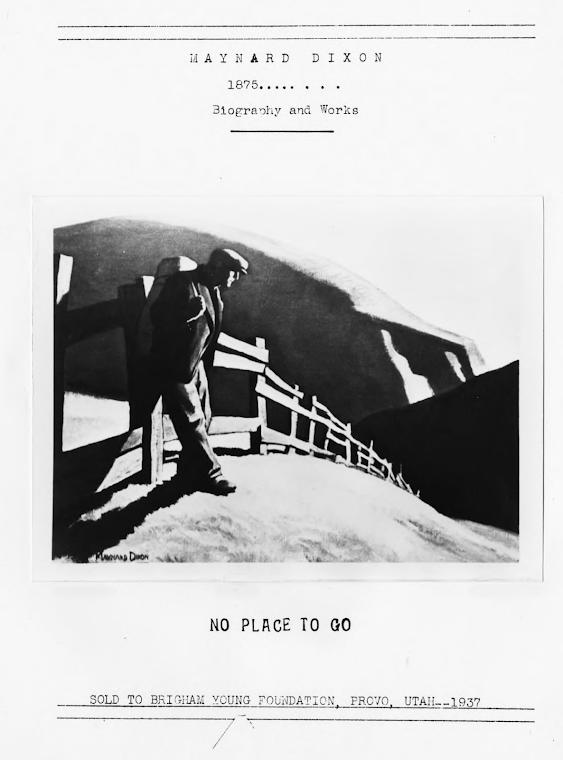 This sort of resonates with me as my mother's nervous breakdown brought me back to California in 1974. I did find an early biography online pdf at the Bancroft library that sheds a little more light. It was written during his lifetime and is entitled, No place to go. 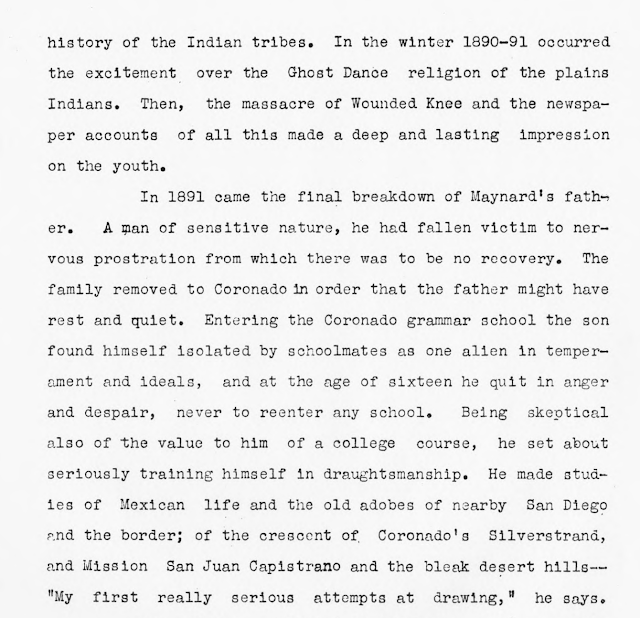 I have asked a few of my cohorts and they say that work from this period is exceedingly rare, I am not sure how much actually survived the fire. 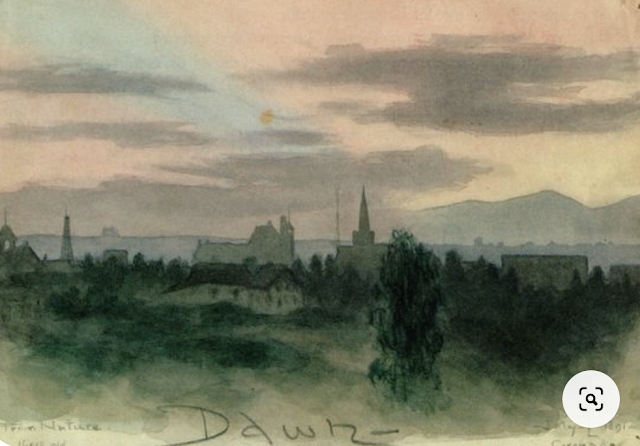 I did find a very nice and well developed piece from Coronado titled Dawn on Pinterest but have no idea where it actually resides. That makes three Dixon works from San Diego County that I know exist.
In any case, I am happy to include him in my personal lexicon of San Diego painters and will continue to explore and search for more evidence of his time here. As always this is a start and not a finish for me. If you have more information or hopefully more pictures of his work from his tenure in San Diego county, I would be very happy and most obliged to see them.
Posted by Blue Heron at 3:53 PM

What a wonderful discover.
Diane O

Robert,
That is the best part of doing what You/we do. I love to uncover the
history, provenance of these early pieces that in this case recorded
California's growth. This is before Fries, correct?
Very nice!
JS

Fries didn't come west from Cincinnati until 1896. He lived in the ruins of the San Juan Capistrano Mission for a year, arrived in San Diego the following year and stayed until he died in 1940. I should have mentioned that my wife and her family were residents of Coronado when I met her and her mother and father lived there until they passed.