Not sure why but the blog has been blowing up in Sweden the last few days. Tack så mycket!

I have noticed that there has been a lot of rock and roll gossip on the net recently, most of it decades late. George Harrison thought Rod Stewart an idiot, with the brain the size of a marble. Keith Richards couldn't stand Led Zeppelin. Zeppelin hated Tull. Lou Reed didn't like a host of great musicians including Roxy Music and Frank Zappa who he dismissively sniffed was “the single most untalented person I’ve heard in my life. He’s two-bit, pretentious, academic, and he can’t play his way out of anything.” Which is sort of funny because Zappa was incredibly talented, both as a player and composer and Lou Reed had negligible musical virtuosity, if any. Terrible sense of time, as bad as mine, frankly. Reed also bashed the Who, which is also sort of funny because he later played a lovely duet with Townshend, who could play circles around him.

I was reading something that caught my eye the other day about Jimi Hendrix and his antipathy for Pink Floyd and the "psychedelic" bands.

In an early (January ’67) interview with Unit, Steve Barker asked Hendrix about the burgeoning psychedelic scene. Hendrix didn’t think highly of what was being categorized as “psych” at the time. “When these cats say, ‘Look at the band — they’re playing psychedelic music!’ and all they’re really doing is flashing lights and playing ‘Johnny B. Goode’ with the wrong chords … it’s terrible.”

For whatever reason, Barker followed that by asking if Hendrix had seen Pink Floyd.“I’ve heard they have beautiful lights but they don’t sound like nothing,” Hendrix replied. About 10 months later (November ’67), Barker again interviewed Hendrix for Unit. On that occasion, he asked Hendrix how he got “caught up in the hippie scene.” Hendrix answered by saying the Experience didn’t want to fall into categories like “hippie” and psychedelic.”

“It bothers us because ‘psychedelic’ only means mind-expansion anyway,” he said (via Hendrix on Hendrix). “I can’t hear one single word the Pink Floyd are saying,” he added, somewhat obliquely. “It happens to us, but that’s just anybody’s opinion.”

When I read the part about flashing lights and Johnny B. Goode in the wrong key I had only one thought, he has seen the Grateful Dead! They were the absolute masters of playing Chuck Berry in the wrong key. And often slightly out of tune. 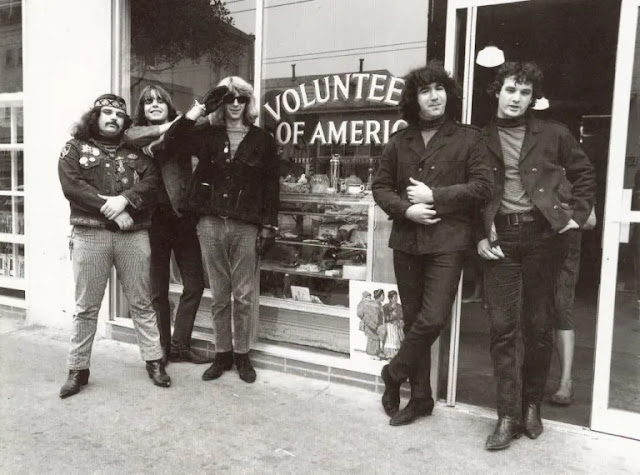 Now I love the Grateful Dead but they are not the easiest band to get, especially for a flashy virtuoso like Jimi. You needed to exceed a certain lysergic quota for it to make any sense at all and they were plainly not for everybody. But let's face it, if you play something bad enough, and for long enough, it eventually becomes your sound.
I am not sure if the Dead ever jammed with Jimi, they may have at Monterey. Rock Scully says in his book that both Jerry and Bob jammed with Hendrix at Monterey. The Dead were supposed to play with him during an Avalon show but he stood them up.

It would have been fun to see Jerry and Jimi jam, that is for sure. East meets west, stylistically. In and out of key.

East meets West? Who is which?