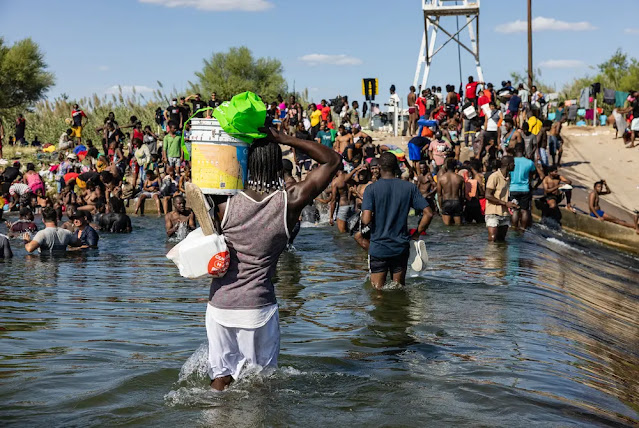 I am not a border hawk or anti immigrant. My father was an immigrant as were my mother's parents. But they came to this country legally and took their citizenship very seriously. Did everything the right way. Didn't demand anything and were grateful for the freedom and opportunity that America gave them. Worked their ass off and realized the American dream, never became a burden on society.

Most people seeking entry to this country today are also just looking for a better life for their families. I admire that. But unfortunately, there is a limit to how many people we can accept in this country and how many of the world's downtrodden we can actually handle. We have a right to only accept a finite number and we have a right to secure borders. As much as we would like to, it is simply not possible for us to solve all of the world's problems. Don't break the rules and then demand citizenship, that is not the way it works.

We don't see an explosion of illegals here in the North County, we have a large immigrant community of Mexicans and Guatemalans in Fallbrook that have been here a long time and are pretty well integrated.

But I guess things are quite different in Texas and Arizona. So different that the Vice President was called on her platitudes by a fellow democrat last week,  Rep. Henry Cuellar (D - Texas.)

"The border is secure, but we also have a broken immigration system and in particular over the last four years before we came in and it needs to be fixed," Harris claimed in the clip. "We have a secure border in that that is a priority for any nation, including ours and our administration."

"Congressman, that’s just not true, right?" Smerconish asked. "You’re on the front line. You’ve spent your whole life in Laredo. The border is not secure, is it?"

"The border is not secure, with all due respect to the VP. This — look, we get thousands of people along the border, from 6,000 to 8,000 people a day. They’re releasing people, and we can send you pictures and videos of what’s happened in Del Rio, the valley, El Paso and other places. People are coming in," he said.

"We have 1.7 million people that were encountered last year. We’re going to have 2 or maybe 2.2 [million] by the end of this fiscal year in about two more weeks. That’s almost 4 million people," he warned. "That doesn’t even include the getaways. Getaways are the people that border patrol has a good idea that evaded them. So you’re talking about almost 4 plus, maybe 4.4 million individuals in two years."

The congressman then called out Harris assessment, "If you call that ‘secure,’ I don’t know what ‘secure’ is."

Speaking truth to power. Call a spade a spade. Good for you, Henry. Integrity is calling balls and strikes from either side of the plate, irrespective of party. Things are definitely getting out of hand on the border. Thank you for your honesty.