I had to drive to Los Angeles yesterday to drop off a few paintings that I sold to a private museum and to show a small collection of paintings to prospective clients in the valley. Things went fairly seamlessly but I had some time between the two appointments and was starving.

I called my friend Alyssa and she said that I was only a few blocks from her house in Encino but that she was not home. I told her I was craving deli and she directed me to Mort's.

Mort's is on Reseda and Ventura in Tarzana. It is a small place but you could tell it was full of regulars. Very tribal. There is a nice bakery next door. Sort of reminded me of Blumer's but not in their league although honestly nothing is. Place has been around since 1968, owner was working the floor yesterday. It is the kind of place you become a regular real quick. A little dingy but the vibe is good. 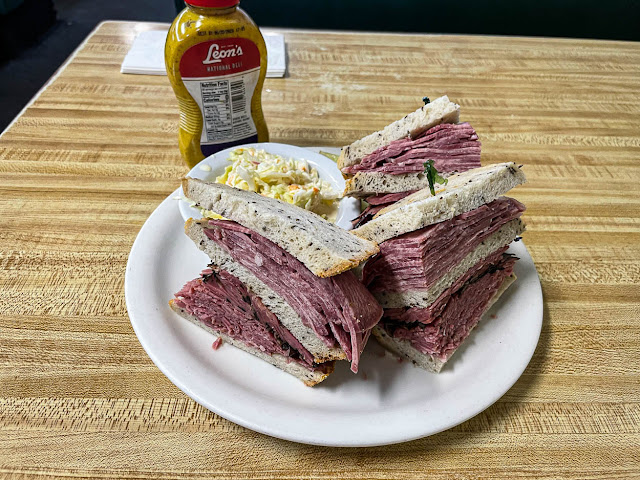 I ordered a pastrami, corned beef and tongue sandwich with cole slaw.
The pastrami was amazing, the other meat, pretty good. The tongue had no texture, not what I am used to. I like it bumpy. Rye bread was good. I will probably be back. I hear the kreplach is pretty good. 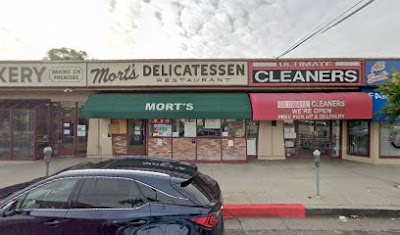 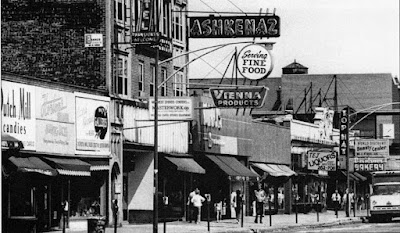 Speaking of deli, I sent this article on Chicago delis to Big Dave - Where have all the nice Chicago deli's gone?
He replied,"Ashkenaz Deli was my favorite when I was in high school. They loved me there. Always offered free food if I would cut my hair but gave me massive sandwiches anyway."
Guess that is why we keep coming back. If only I could find a decent kaiser, crescent or salt stick these days. Been decades...
* 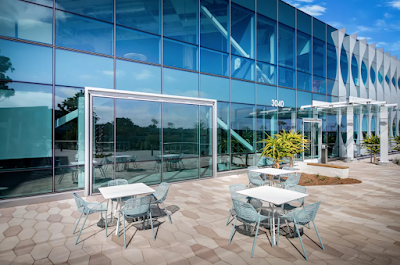 There is a fancy shmancy deli opening up in Del Mar.  Gold Finch. I have serious doubts, hope I am wrong. Sounds both elitist and a bit goy to me. Seems to be missing a little shmaltz.

“We’re calling it the modern delicatessen. It’s certainly not kosher — we have bacon on the menu. So it’s not like your traditional deli, which I’m not sure exists today in most places.” The Gold Finch space, which will be designed to be light and airy with stone and wood accents, will feature a glass facade, a floor-to-ceiling glass door, and outdoor patio.
Borkum says she is excited about a concept — and menu — that evokes her own memories of growing up in London’s Jewish neighborhoods. She’s especially enthused about the banana fritters and halvah ice cream dessert that was inspired by her recollection of her grandmother making banana fritters.
A menu item that is more in keeping with Sephardic cuisine, Borkum said, is a shakshuka, prepared with a poached egg in a green tomatillo sauce with spinach and za’atar. Among the offerings sure to whet the appetite of deli devotees are challah French toast, matzo ball soup, berbere spice fried artichoke with sumac aioli, and a chocolate babka bun with orange cream and streusel.

Hope I am wrong. I usually love her food but this one sounds a little weird to me. Food a bit too precious. But she honestly might have me with the bacon, or pink chicken as it was called in my family.
Posted by Blue Heron at 4:29 PM

OMG! I’ve been dying for corned beef on rye!

If you hear where I can get a decent salt stick - please tell me. I would pay the likely fortune in shipping to get good salt. Sticks or corn rye.