Another Russian official dies in a mysterious "accident." Putin and his cronies are below contempt, bloodsucking ghouls.

Russian news outlet Izvestia reported that Anatoly Gerashchenko “fell from a great height” down numerous flights of stairs inside the Moscow Aviation Institute’s headquarters, according to The Daily Beast. The institute’s press office described his death as “the result of an accident.”

Ravil Maganov, who chaired Russia’s second-largest oil company, Lukoil, reportedly leaped to his death from the sixth floor of a hospital earlier this month. Billionaire Alexander Subbotin, a former manager at Lukoil, was found dead in May of an apparent heart attack in the home of a shaman, according to Newsweek.

Meanwhile, local news reported that Leonid Shulman — an executive at the country’s third-largest bank, Gazprombank — hanged himself in his cottage in January, according to Reuters. The next month, former Gazprombank executive Alexander Tyulyakov was also found hanged, the New York Post said.

Vladislav Avayev, a former vice president at the bank, was found shot to death in April next to the bodies of his wife and daughter. The following day, Sergei Protosenya — an ex-manager of Russia’s second-largest gas producer, Novatek — was found hanged in a Spanish villa.

Thus far, authorities have not said that foul play caused any of the men’s deaths.

Sounds like an awful lot of bad luck, huh? I was thinking about China's premier now cementing his status as "Dictator for life." First Putin, then XI. And you know what, if Trump had actually won the last election, we probably would be facing the same thing here right now. The man who could not get off the stage. Orange President for Life. Think McCarthy or McConnell would utter a peep? 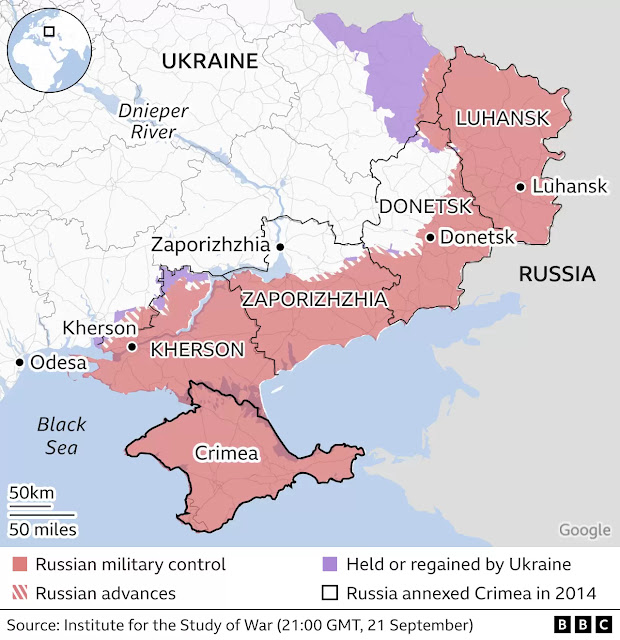 Russia is holding sham referendums in four areas, Kherson, Zaporizhzhia, Donetsk and Luhansk, in order to eventually annex them into the motherland and protect the rights of Russian speakers in the eastern Ukraine.

Can you imagine if Mexico started fighting to reclaim Chula Vista and Imperial Beach in order to "save" the Spanish speaking population there? My guess is that we wouldn't like it too much. Stand with Ukraine.

It is quite possible that the internal Russian reaction to the mass mobilization is the tipping point to bring the feral Putin down, could not happen soon enough. "How do I break my own arm?" was one of the hottest search phrases on the Russian internet yesterday, I don't think the citizenry is really down with Vlad's expansionist pursuits. Costs the equivalent of about $9k to get out of Russia yesterday, probably a lot higher today.

Russia is threatening to use nuclear weapons to end the conflict, I believe that it would be the last thing they ever did.

I am really hoping that Putin will meet the same end as the guy who “fell” downstairs or the guys who were found hanged. That would be some kind of justice.