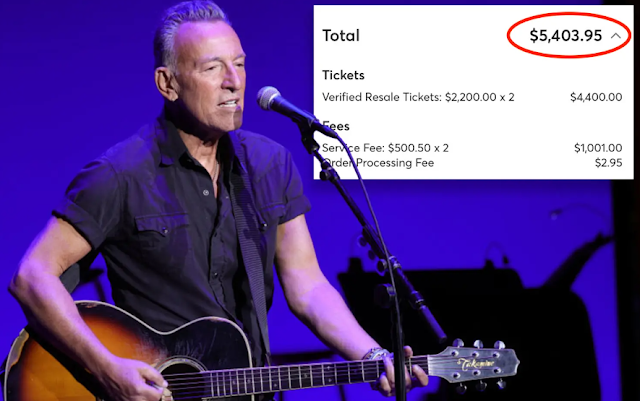 I was listening to Meg Griffith discuss the price of $pringsteen tickets on the radio the other day. I guess that with the wonderful new "dynamic pricing" concept at Ticketmaster, some seats were running more than five thousand bucks a pop. More on the subject here. Springsteen's manager tried to deflect.

“In pricing tickets for this tour, we looked carefully at what our peers have been doing,” his manager, Jon Landau, said in a statement. “We chose prices that are lower than some and on par with others.

“Regardless of the commentary about a modest number of tickets costing $1,000 or more, our true average ticket price has been in the mid-$200 range,” he continued. “I believe that in today’s environment, that is a fair price to see someone universally regarded as among the very greatest artists of his generation.”

Bruce sounds like a great capitalist, god bless him. Greatest artists of his generation? Debatable. I find him to be a bit of a bore, honestly. Will listen to Southside Johnny if I absolutely need the Jersey thing.

Just heard that you can hear Bruce talk about his great career on a podcast with Jann Wenner too, that is if you are willing to fork over another sixty bucks for the privilege. Beautiful. Should really help his kids's college fund. Maybe Bruce is feeling a little tapped?

I wouldn't dream of paying that kind of gelt for a concert ticket. I paid $400 for a Bowie ticket once and have been guilt ridden ever since. I don't know where people get the money and also don't know what they are thinking. How can you enjoy yourself enriching some millionaire musician and paying this sort of dough? Honestly, is there anybody out there worth paying this sort of money?

Leslie and I flew to New York to see the Cream reunion and didn't pay a quarter of that, airline and hotel included. 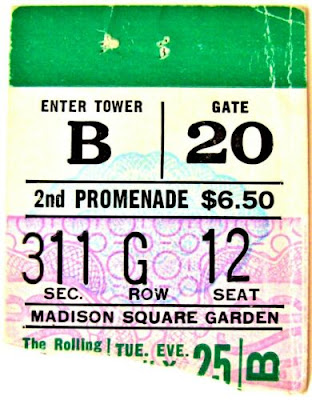 I went to some great shows as a kid. Madison Square Garden to hear Stevie Wonder and the Rolling Stones in 1972. Mick's birthday show, the famous one. Barbara took me. 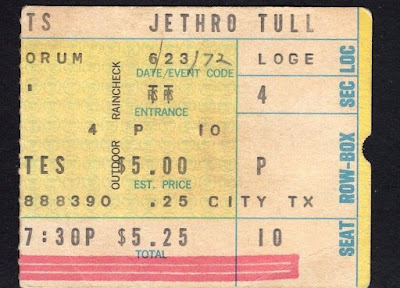 The best show I ever saw, Jethro Tull, Thick as a brick, same year at the Sports Arena.

Well, $5.25 if you add the tax.Throw in a tab of orange sunshine, whole thing would run you twenty bucks tops. And I guarantee there was a lot more shaking going on than you would ever experience at a Springsteen show.

Now I don't want to sound like old rocking grandpa telling you to get off my lawn, but damn, the music was daresay better and music was still affordable in my day. By the way, a lot of shows cost far less than this. Tickets used to be three bucks.

We weren't paying off the Scottish salmon farms and French chalets for these precious rockers back then. Or expensive rehab in the Caribbean. Maybe they weren't quite so full of themselves, back then, these great artistes.

Of course there are a lot of things I won't pay for nowadays. Don't know how you people do it.

Legoland admission starts at $89.00 and it goes up from there. That is for young kids. Sea World - $99.99, although they will apparently discount. Single day San Diego Zoo ticket is now $65.00. Disneyland - starts at $104. And hey, when is it ever just one ticket?

Honest to god, I couldn't have a good time spending this kind of money trying to have fun, I would be guilt ridden at the very thought. I really don't know how you people do it. I think I would rather go hiking or read a book.

I guess baby, I wasn't really born to run. Wouldn't fork over five grand if Jesus was playing.

Time for you and your friends to make your own fun. Maybe the kids today don't get that. I'm glad we did. ~ Diane O

In a place that monetizes everything, I suppose this is to be expected. Creativity is the antidote. The more creative one is the easier it is to find something interesting to do without $5,000.00 tickets required. Perhaps that is why so little emphasis is placed on creativity—it’s a threat to consumerism.

When we were kids, mom took us to the San Diego zoo nearly weekly. And that was a family that didn’t spend a whole lot on children and almost nothing on tickets. I remember mom told me they bought a membership to the zoo so it was very affordable.

You remember me and concerts. Didn’t espresso like them and only went when someone bought me a ticket. The only group I remember paying to see was commander Cody and the lost planet airmen.