I am wading through the last episode of the Tolkien based Rings of Power. The series is awful, but not quite as bad as the Lord of the Rings or Hobbit film series was. I am a committed Tolkienologist, have read pretty much everything J.R.R. ever wrote, multiple times, and all of the film adaptations have been dreadful, in my opinion. Overly sentimental and lacking in majesty.

I can't stand the deviations from the original (e.g. the lack of Tom Bombadil) in the previous films and the complete takeover of Tolkien's universe in the new one where stories are created out of whole cloth.  Was that really necessary?

Now some people are offended by the more multicultural tones of the series. Honestly, I like that. It is the other stuff that bothers me, the need to fill in the gaps of Numenor and the middle earth canon. Sort of like taking a spray can to the Mona Lisa, totally unnecessary.

The Lord of the Rings is almost a religious text for me. How would you like it if I decided to write the new book of Schlomo and drop it in somewhere between Deuteronomy and Leviticus? You would cry apostasy and have me burned at the stake.

And I don't know if you have noticed, but Galadrial and the elves have pretty much been denuded of all their magic. Just a bunch of muggles with pointed ears at this point.

"I no longer believe that freedom and democracy are compatible." Peter Thiel 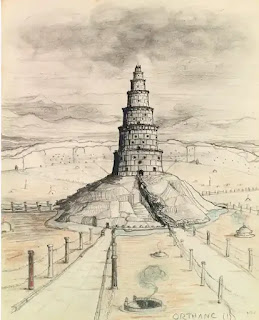 I despise the right wing industrialist Peter Thiel with all of my being and fiber. I loathe him and his philosophy and the candidates he supports and the places he plants his dirty lucre.
He is an absolute pig. And his company Palantir has been on the front lines of arming the police state. Palantir software was instrumental in border deportations.

The other day I was reading about his border detection technology, which is called Anduril, after Aragorn's sword. Scary stuff. Never sleeps, never blinks, the high tech Anduril towers spreading along the U.S. border. Funded by Thiel, the autonomous surveillance towers can detect a human from 2.8 km away.

I don't know about you but this seems much more like Mordor type stuff than Lothlorien, I did not know John Ronald Reuel Tolkien but I have read enough about his life to think that he would find his middle earth cosmology being co-opted like this quite horrific, as I do. Raise the Shire, the evil doers are at the gate. And they are not the poor immigrants. The Balrog in the story is Peter Thiel.

Don’t dis the Bool of Schlomo. It has been my only scripture for all these years.

The Lord of the Rings is a great example of the power of literature. Tolkien was an accomplished scholar who really knew his mythology. I think he wrote Rings as a hobby or avocation but he really got it right. Literature has the power to describe scenes and situations that are really hard to translate to a different medium. Perhaps there is some reassurance here. Even Jeff Bezos with his piles of money can't manage to get it quite right. Could it be that there is some magic in the written word that can't fit into a video camera and squirt out of a cell phone with the same majesty of the original. I think that there is in the sense that literature with all of its drawbacks can actually contain most of the full power of the human mind. Could it be that there is a reason to read? Could it be true of other media. We will see soon enough when the "meta verse" is presented as a way to get people to understand powerful art like great paintings? I don't think it will work. "Guernica" will get reduced to a cartoon by the time it is is twisted and contorted into the metaverse and stuffed into a cell phone or a pair of goggles. We'll see, but there seems to be a massive dumbing down going on. Heck, I am just taking my Book of Schlomo and going home!