“All of us in the conservative world have believed that there’s nothing in the Constitution giving the federal government the right to regulate abortion.” Sen. Lindsey Graham - June, 2022

Does the federal government have the right or doesn't it, Lindsey? Make up your mind.

Graham is the most shameless liar. Today he proposed a national "late term" abortion ban after 15 weeks of pregnancy. This is also semantical gamesmanship as this is a term normally reserved for abortions later than the second trimester, or far past 20 weeks of a forty week pregnancy. If his ban were enacted it would strip progressive states' laws that allow abortions during this period. So much for state's rights.

“15 weeks is not ‘late term,’ particularly given the significant challenges to access around the country,” Christina Reynolds, vice president of communications at Emily’s List, wrote in a tweet.

While most people undergo abortions earlier in pregnancy, 15-week and 20-week abortion bans disproportionately affect patients with fetal anomalies, which are often detected at a 20-week anatomy scan, along with those who take longer to realize they are pregnant. These kinds of bans will also affect more people in a post-Roe America as abortion clinics struggle to accommodate a swell of patients from states where abortion is now banned. Graham is the same old lying bastard who refused to let Merrick Garland have a hearing and then flipped the script for the Trump nominee Amy Coney Barrett.
Who once told Jeffrey Goldberg in an Atlantic interview "If an opening comes in the last year of President Trump's term, and the primary process has started, we'll wait till the next election."
And then promptly and conveniently decided that the rules had somehow changed when the political wind shifted.
I wouldn't vote for this prevaricating scum for dogcatcher.
No wonder people can't stand politicians. You can't believe a word that comes out of their mouths. Miss Lindsey thinks that this will blunt the national anger over the Dobbs decision. I honestly believe that it will have the opposite effect and merely showcase his parties lack of ethics and credibility regarding this issue. One party believes in personal choice and it is not the GOP.
Forked tongue asslicker. 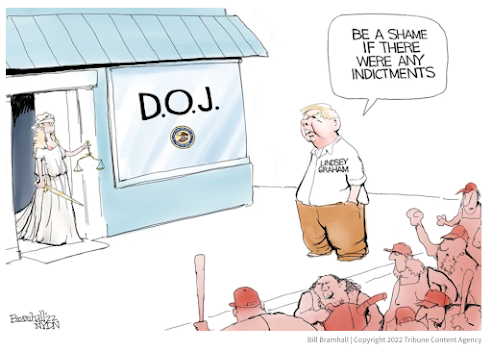 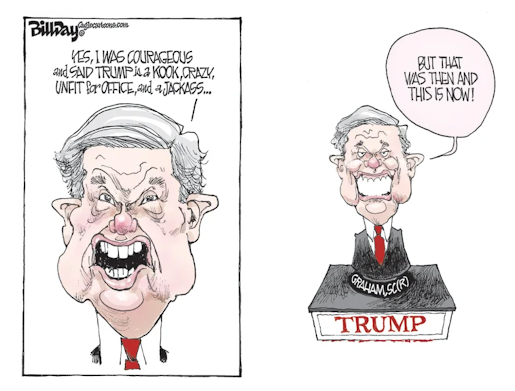 Well, this might be cause for celebration. From the viewpoint of voters who tend to not pay a lot of attention, the
R. Party has been showing these folks the.RESULTS of Republicans with power. That is, removal of rights. We were steamrolling into a huge disaster for Dems. However the Supremes and Trump have ridden in to the rescue with Dodd from the supremes and the three ring Trump scandal circus from the Donald. Without this masterful self immolation we might be well on the way to kissing Democracy goodbye.

Alito without knowing it did the Dems a solid