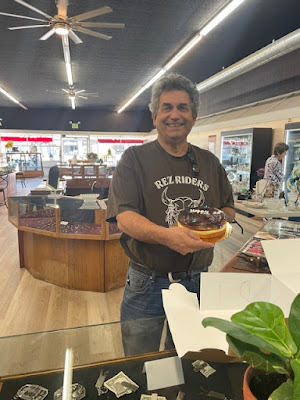 Today is my shop's 25th anniversary. Proud to have survived and even flourished at times, has been a good run although the trip was not without its low points.

Lois and Bob brought me a lovely Boston cream celebration cake this morning. We shared it over at Jamie and Kathies' shop.

You know the blog I sent out the other day announcing the shop birthday?

Thanks to all of my friends and clients who have made my dream a reality and have been there for Leslie and I during the ride.

Well I got this rather snarky letter in response from an old friend who used to be an english teacher:

Try Leslie and Me,  grammar is your friend...

Thought it was a little bitchy but hey, maybe she was having a bad day. Truth is, it sounded okay to me the way I wrote it. But obviously it was offensive to some. I started looking at the rules for this sort of thing; is it serving as a nominative pronoun or "subject" or a predicate nominative or "object?"

She is right I guess, which I hate. Hope not too many of you were offended. Maybe just enough...

I was listening to a political commentary the other day and a speaker commended his cohort for slipping the word orthogonal into the conversation. I think it is getting a lot of play all of a sudden. Like redound or granular did last year.

But I also realized that I had no idea what it meant. I thought I did but I was reaching. You see I was an architecture/art major and we did orthogonal projections in technical drawing, showing objects in a variety of two and three dimensional views.

Here's the classic definition: Noun. The two-dimensional graphic representation of an object formed by the perpendicular intersections of lines drawn from points on the object to a plane of projection. Also called orthographic projection. 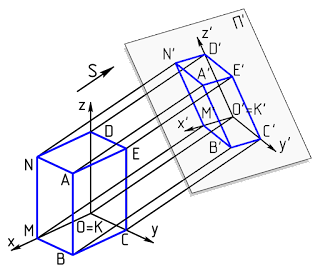 But this sort of orthogonal is all geometry, with little tangency to political commentary.

I would look it up.

Still not a lot of help, a statistics definition of independence.
There has to be more for this word du jour.
Ahhh, here it is - having no bearing on the matter at hand; independent of or irrelevant to another thing or each other:
It’s an interesting question, but orthogonal to our exploration of the right to privacy.
Another adjective for a non sequitur. At right angles to the matter in question. Couldn't they have just said so?
*

The other word that has been floating around my quiver of late is a german word, zugzwang. I study a lot of chess and the word frequently comes up. It describes a point in chess or any other game where making any move will only worsen your situation.

The word comes from German Zug 'move' + Zwang 'compulsion', so that Zugzwang means 'being forced to make a move'. Originally the term was used interchangeably with the term zugpflicht 'obligation to make a move' as a general game rule.

Here is an interesting article on the subject from Quanta Magazine, The Secrets of Zugzwang in Chess, Math and Pizzas.

I believe that there is an i ching corollary for just such a state, where everything you might attempt to do will only ultimately turn to shit.

I believe the Chinese word for the hexagram translates to hide under the bed and wait for it all to blow over. And who hasn't been there?

Leslie and me is correct :-)