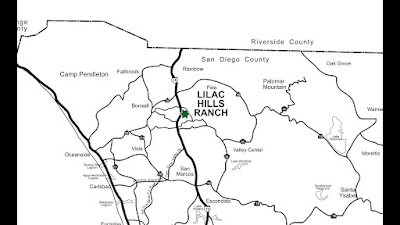 Two years ago, more than 64% of San Diego county residents rejected the then proposed Lilac Hills Development measure which aimed to build over 1700 new homes in a very rural and pristine area of Valley Center.

Lo and behold, the developers are back with essentially the exact same plan and the fix might be in for them at the County of San Diego. Talk about putting lipstick on a pig.

The new scheme? Bundling the project with six other projects in the unincorporated areas of San Diego County representing 10,000 more units, and cramming them down the public's throat, like it or not.

I have to assume that retiring Supervisor Bill Horn's hand is in this somewhere. His nearby property will certainly be worth more money if the project goes through.

I have not heard anything positive from those seeking to replace him in District 5. I will certainly not be voting for Jerry Kern based on his views on the subject.

Too often the inhabitants of the unincorporated area have ended up on the wrong side of these sorts of funny deals. Some people won't be happy until San Diego is wall to wall housing, asphalt and cement, like Orange County.

The once rural I - 15 corridor near Fallbrook has been inundated with these types of high density developments the last several years.

Yes, we have a housing problem in Southern California. We also have a shortage of other things like water and native habitat. The freeway has become near unbearable at certain peak hours.

Those of us that have fought to protect the back country for years have to bridle when politicians suddenly subvert the will of the people and engage in these kinds of last second, sleight of hand, back room shenanigans. Hold your representatives accountable.
Posted by Blue Heron at 1:48 PM

Lilac Hills. Same old, same old bullshit. Corridor will be a nightmare. Wait, it already is...