The day I met Jerry Garcia


As many of you know, I was a full fledged, raging dead head for a big chunk of my life. Still love the music, although I don't listen to them quite as much as I used to. I guess I was turned on to them by my older sister liz, who was getting into things psychedelic in around 1967 and 68. 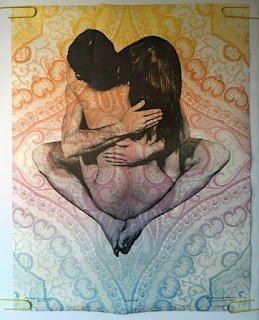 Liz really loved the Jefferson Airplane and she and my stepfather would constantly perform this little kabuki skit where he would tear her yabyum poster off the wall and break her white rabbit 45 into little pieces and she would then proceed to go buy another one and on and on and on...

Liz turned me on to grass too, but a little later and that is an entirely different story.

Anyway I went to boarding school along the way and totally got behind the Live Dead album and then the first solo Garcia record and started seeing them not long after. I was such a fan, my similarly obsessed friends and I would call each other up and sing the lyrics to cryptical envelopment, buy every crappy out of speed bootleg vinyl dead record (this was before tapes were widely known and disseminated) and catch every show we could.

I loved the Dead. Would often dream about them, have full two set concerts in my sleep, replete with drums, space and backstage banter.

Jerry was pretty much superhuman to me. He and the band hated that notion and I sheepishly admit it to having it, but I am being honest here, he seemed to have full control over a magic space where many of us (myself totally included) were just infant babes in the woods.

I saw hundreds of shows, stopped counting early, screwed up my life in a million ways having too much fun, missing finals, work, etc. but paid the price for the sounds, what can I say?

Now if you spent a lot of time touring around, you often stayed at the same hotels with the band members but except for a cheery nod now and then, you gave them their space. Or at least I did. I said something idiotic to Phil once in an airport and I learned my lesson quick. They did not suffer fools. Later we had a memorable meeting, at least on my end, but that is also a subject for another day.

I have been lucky in my life to meet and make friends with many of my artistic heroes, people like Allan Adler, Sam Maloof, Roger Zelazny, Theodore Sturgeon and others. I always loved science fiction and comic books (a love I shared with Jerry) and at some point in time I became close friends with the artist Rick Griffin. Rick was my artistic jefe, the dean of psychedelic, surf and underground art. We hung out a lot together and even painted together on a rare occasion. Rick was represented by an amazing and slightly nefarious character named Jose Kent, who was also a close friend of mine and has long ago sailed into the gentle hereafter.

One day I commissioned Rick to do a painting for me. My personal totem was the phoenix when I was young, what about a phoenix rising from a heart? Hmmm, Rick thought. Might work. 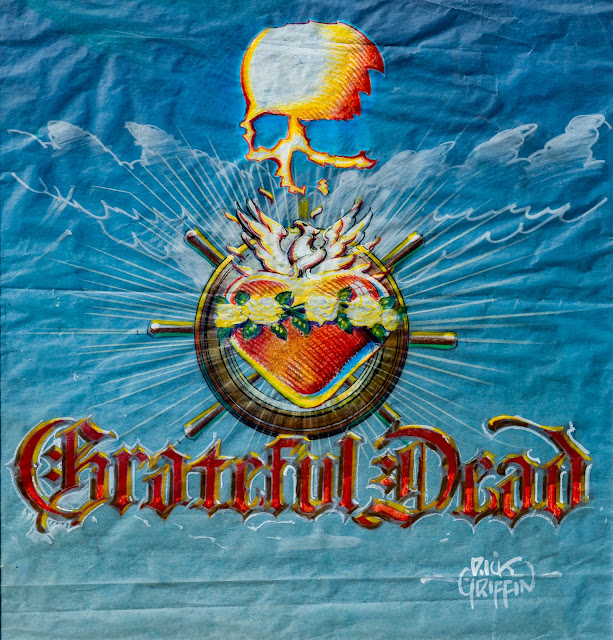 This color pencil and gouache artwork is, I believe, the earliest conceptual drawing of the project, on vellum, replete with a ship's wheel, which was later cast away for some reason. I liked the nautical theme and was excited about the prospects of a painting. Ultimately it became more of a street graffiti image, unfortunately in my opinion. Rick was listening a lot to the band X at this point.

This drawing was actually nicer when I first got it but Rick insisted on fixing something in the bird about a year or two later and ended up blotting out some really sublime work. I finally grabbed it and said - you are done. 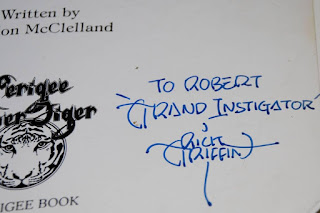 Rick did scores of drawings for every project, wanting to get everything just right. And sometimes you waited forever for your piece and sometime he would sell it to someone else at the last second and sometimes you never got it at all. But he made it up to you. Mostly.

Anyway I waited and waited and one day Rick asked me if I minded sharing the piece with the Grateful Dead? "Why no," I said, "I would be honored." He of course had been doing a lot of their artwork for years.

So Rick painted up a t-shirt and asked me to fly to San Francisco and show Jerry and Kidd and see what they thought. Jerry was a painter and an artist and I think the rest of the organization ceded a lot of decision making to him in regards to the graphics.

I visited San Rafael first but it turned out that Jerry was over at the Warfield getting ready for his long stand, ten shows in 1980. I entered a door to the backstage and there was Jerry, playing guitar by himself in the center of a large room, sitting on a stool. He was incredibly sweet, he told me that he loved the art and we swapped stories about his old pal Griffin. Very gracious man, witty, respectful, all that I had dreamed of and more.

But there was one funny thing, he was really nervous. Not about me, about the show. How would he play? He voiced his apprehensions to me, he was clearly sweating. How was he going to play that night? And I am thinking at the time, by 1980, they probably had close to 2000 or more performances under their collective belts, how could this person I practically deified actually be nervous? This guy who had all the notes on a string and sang like a songbird and made it all look so effortless? Wasn't he bulletproof?

And I think that the answer strikes at the brilliance of the man, it was because he cared so deeply about his craft. When the bell sounded he wanted to deliver. A cosmic matador waiting for his call. 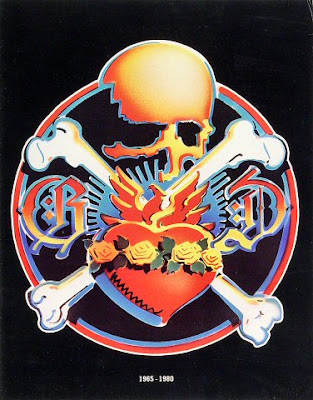 They took a picture of the shirt on my chest, the very picture which became the cover for their Radio City program later that year in New York. Still have the shirt in my drawer, complete with a small stain and now about five sizes too small.

I am not sure that I saw all of the Warfield shows but I may have. My memory is a little foggy about such things, you will have to excuse me. T'was thirty eight years ago.

Rick ended up knocking off a shitload of paintings of my image, he was broke and needed the money. No big. I had better stuff.

Eventually the Dead wanted to use an iteration of the image for their Reckoning cover. Rick wanted to call it Dread Naught, a play on the guitar and the ship and I suppose fearlessness but was in the end voted down.

I stayed up for four days and nights with him trying to get the painting "just so." He was pissed and so was I, it just wasn't coming together. Or he would paint something simply amazing and you would fall asleep and the next thing you know he had painted over the damn thing.

It was early one morning when I had finally had enough. "Someday the well runs dry, Rick. I will see you later." He was a devout christian and I will never forget him looking at me and intoning "Mine is the well of everlasting life." He was holding his index finger up in the air like Lonnie Frisbee. "Sure," I mumbled somewhat sarcastically and headed on down the road. We were both completely fried and exhausted at that point.

Funny thing is that I think I goaded him into painting a very nice version that he finished that very day and sent up to the Dead, which looked just like this. 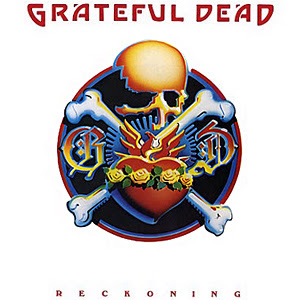 If I hadn't been an asshole to my buddy it may have never come together!

*
Later I had other great projects with Rick, helped him with a ZAP issue or two, great fun. Will never forget a great afternoon at Spain and S. Clay Wilson's house with everybody else in the comic universe there too, Crumb, Moscoso, Alton, Mouse.

I was a kid in a hippie candy store.

*
Years later I ran into Jerry at Beernbaum's Best Comix.  He was not doing well and the conversation did not go so well but I did not submarine any deal as B.B. later liked to intimate.

We talked about comic books and Jerry was having a hard time remembering words and names. Just a bad period for him. He remembered me but he was very dark. We talked about our favorite comics, literature, drugs and Terrence McKenna. Psychonaut stuff.

Ran into him and Bob again at Rick's funeral and also backstage the day after my wedding in 1994. Parish hovered so nobody got too close, seemed like he was in a protective cocoon. Still he sang like a canary.

I choose to remember him as I met him the first time at the Warfield and through the fantastic music that he left us all. An amazing human being, an all too human hero. 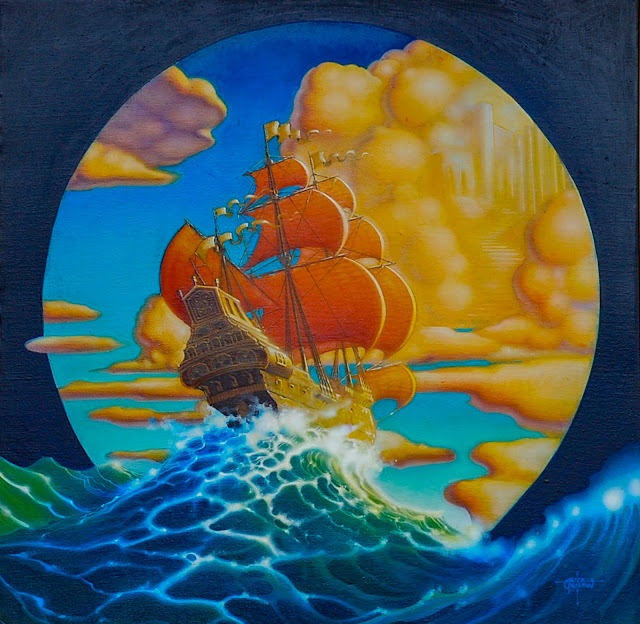 I first met you in front of the La Paloma Theater in Encinitas, CA while waiting for a Jerry Garcia Band concert in Dec. 1975. We became fast friends. In the forty-plus tears I have known you, I don't recall you telling me this story. I too, have met Garcia, and probably have told you my story more times than you would ever care to hear it. Fine. I know where I stand. I think I will keep the stories of my meetings with Mel Allen and Chris Schenkel to myself. Two can play this game!

That is funny! Loved Chis Schenkel but got to admit that he was no Chris Economaki.

The Grand Instigator is a befitting title for you. Cool shirt and story!