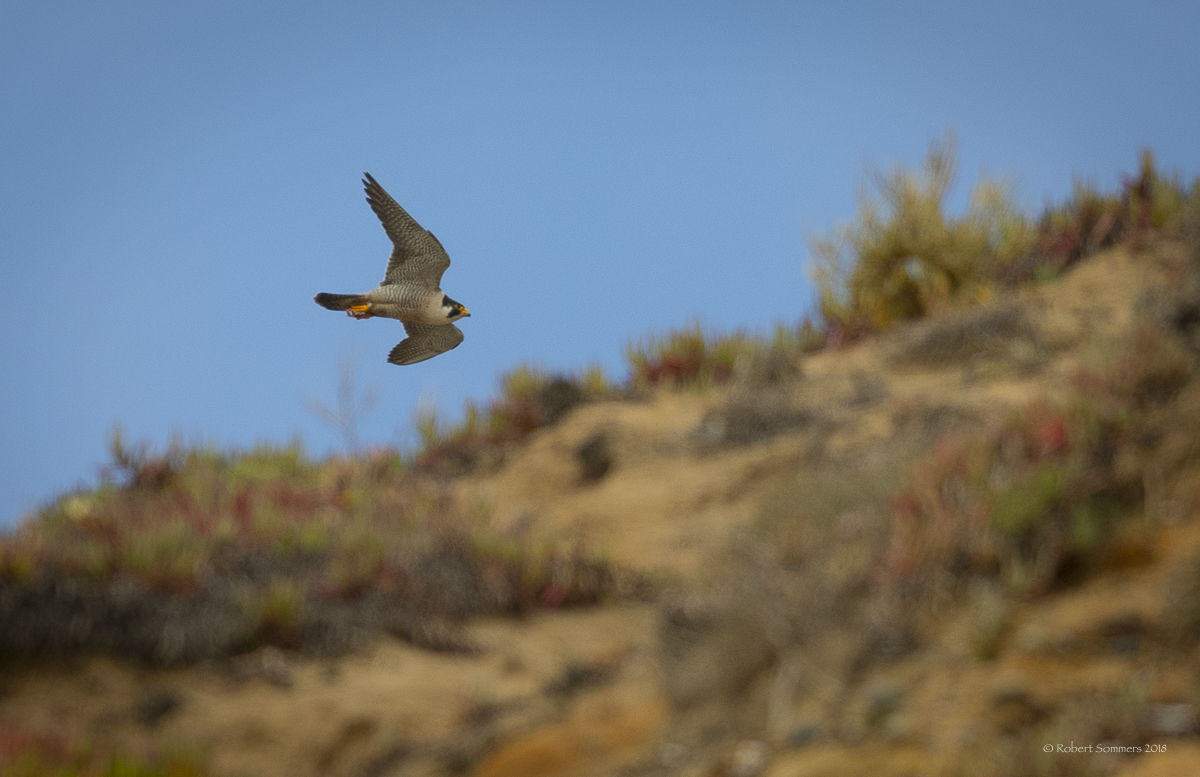 The end of May is always one of my favorite times of the year. I am a bird guy and to me, the end of May means that there will probably be baby peregrine falcons learning to fly at Torrey Pines. Hot damn. 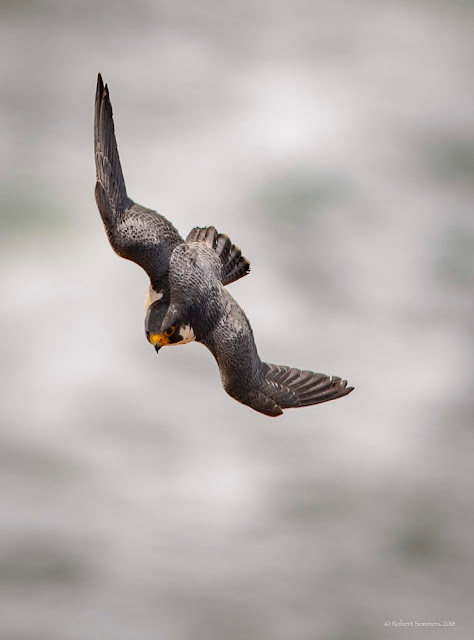 I called my ace bird photographer friend Larry about a week or two ago, seeing if he had any news and he told me I was a bit early. Then the other day he said that he had news, from Herb's site, four babies this year, in the old nest, bouncing around on a ledge. The day before yesterday Herb had a picture of a fledgeling up in the air.

We would not waste time. It can all be over in a matter of days. We drove down yesterday. 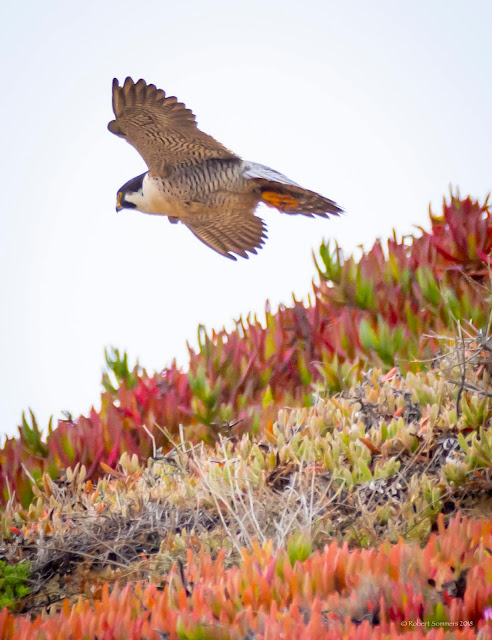 I espied an adult falcon high over our heads, breezing across the tops of the eroded bluffline, contrasted nicely by the lovely hues of the native iceplant. 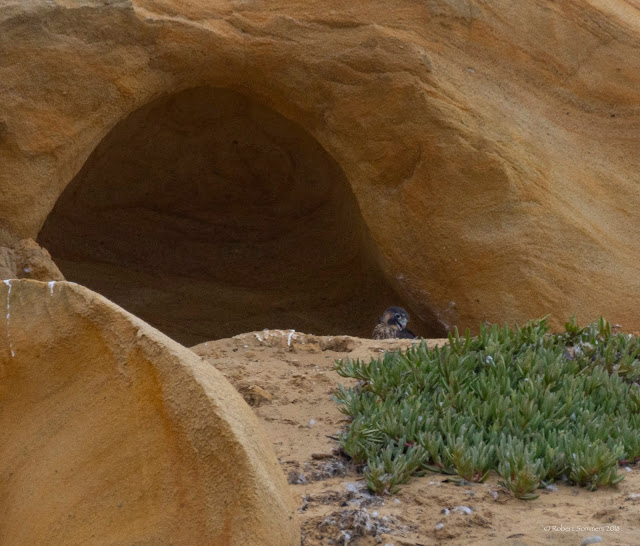 We initially parked on the beach and walked down to the spot past the lifeguard tower.


Although the spot was very far away, I managed to snap this shot of the lone baby falcon still in the cave. His siblings had left, probably never to return to the nest. I was using my zoom in the morning session, switched to the prime later on. 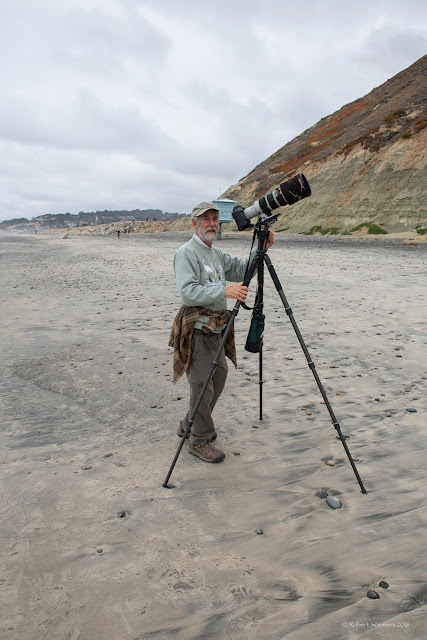 The day was rather gloomy at this point. We had the shoot to ourselves. I imagine it will get a little crowded in the coming weeks.

We headed over to have a cheap Mexican lunch and planned our return in the afternoon.

We paid our money and drove to the entrance to the Guy Fleming Trail in Larry's van. 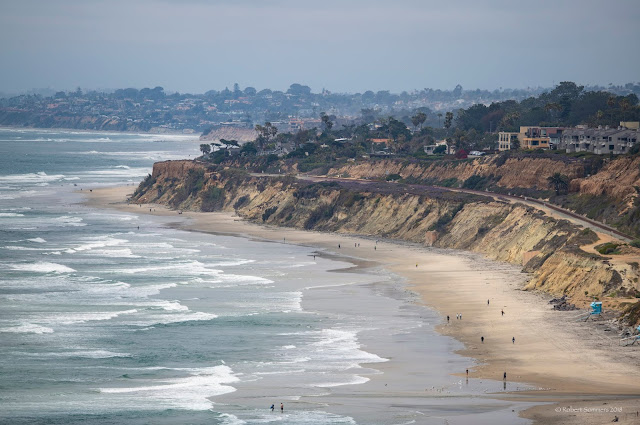 The beach and coastline of Del Mar lay to our north. 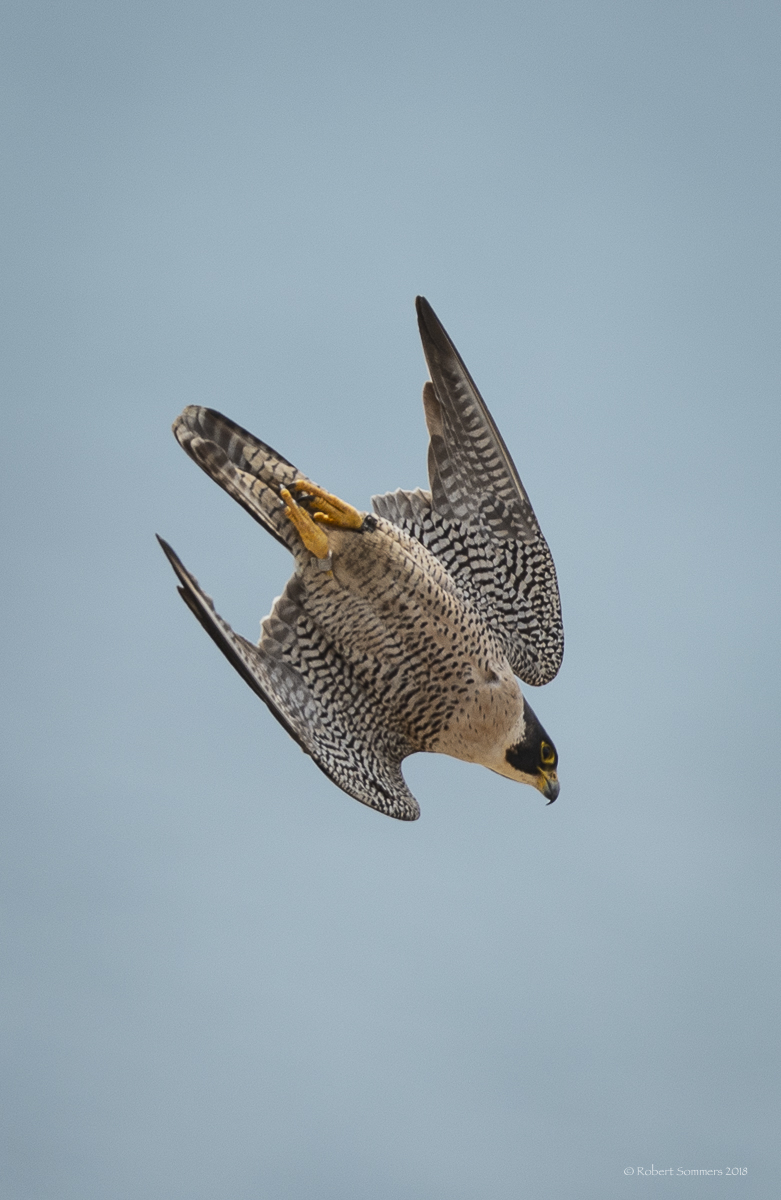 We lugged our heavy equipment around the trail. Got some decent shots as well as some near misses. 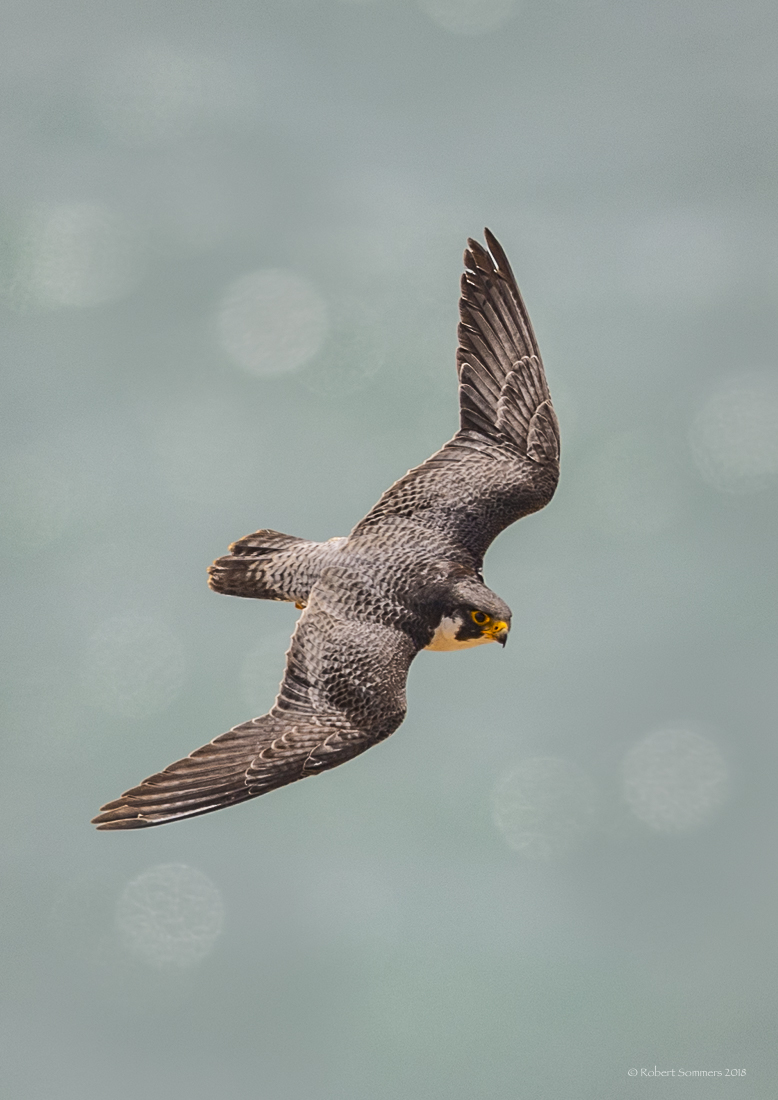 You try to raise the bar every year and we still have time. 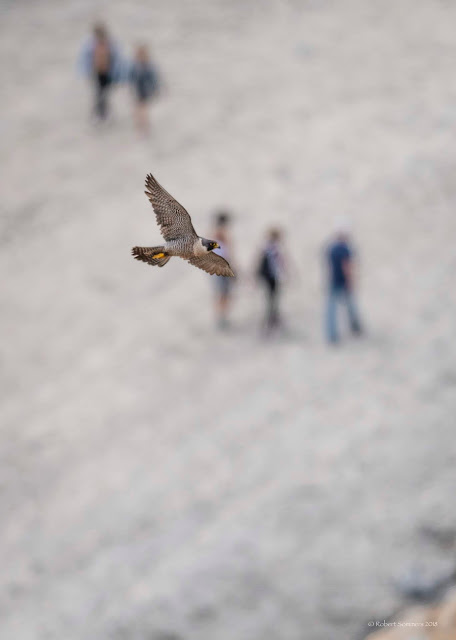 It didn't take long for one of the freshly minted juveniles to fly by. Note the last baby feathers. 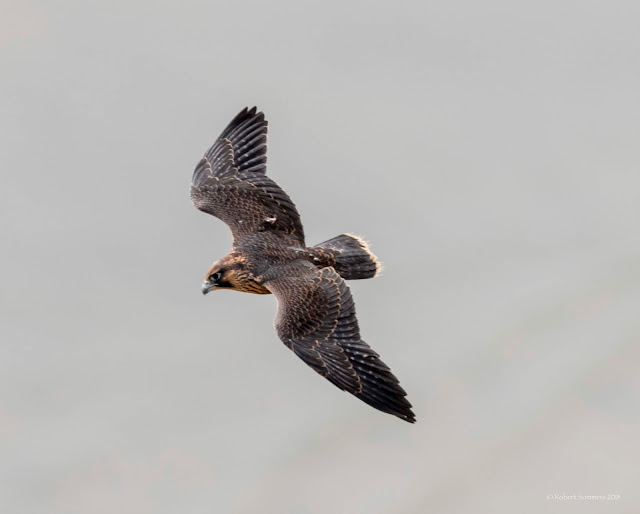 The peregrine falcon is the fastest animal of any kind on terra and always a thrill for me to watch. 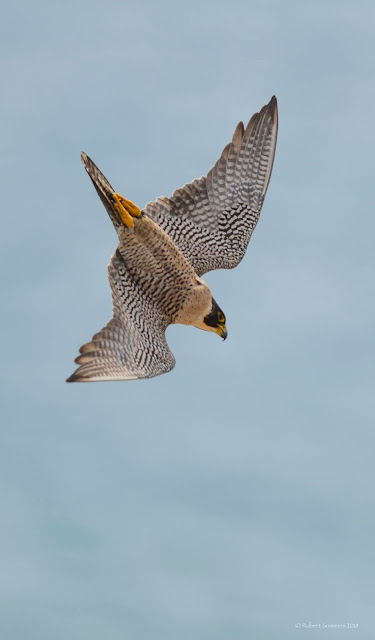 Their plunging dives are so sharp and magnificent.

And there is seemingly no learning curve, they get it pretty much straight out of the box. 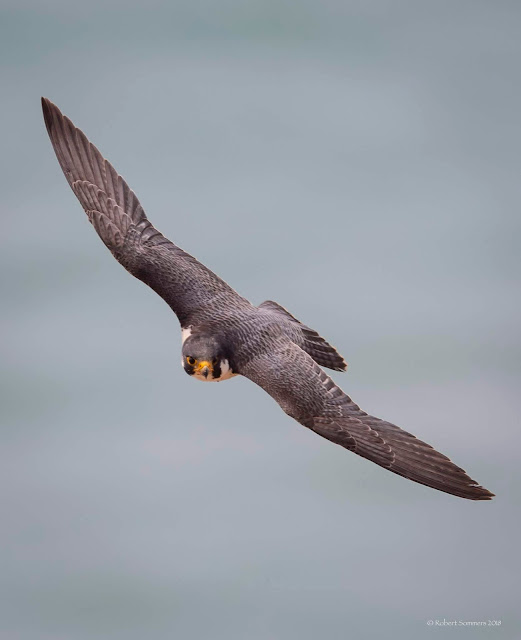 We had a nice time. Sun broke through at some point. 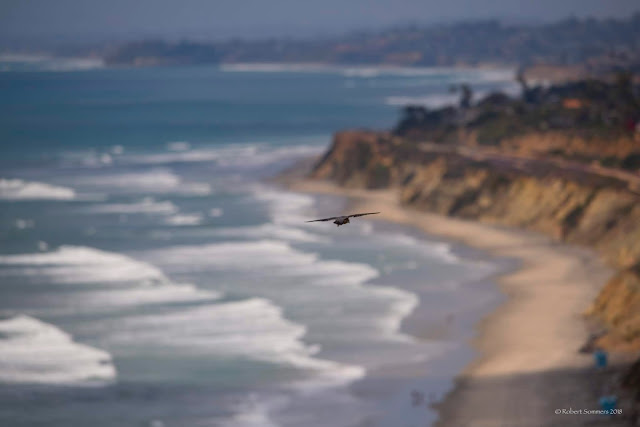 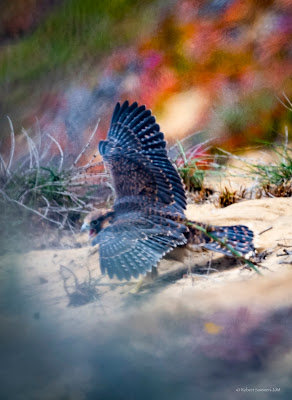 Didn't get any real close shots. We had a falcon fly to a spot about fifteen feet from us but it was obstructed by dead tree branches. 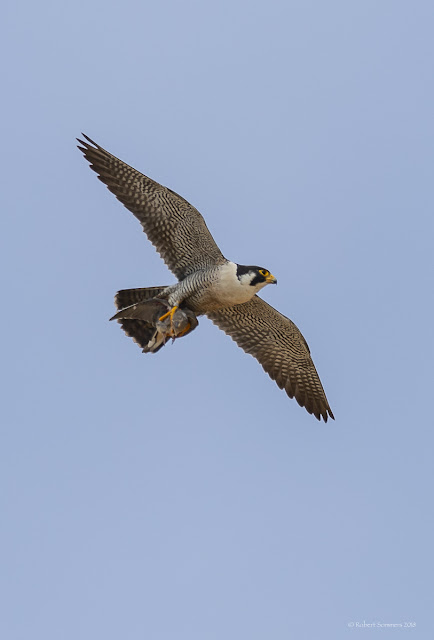 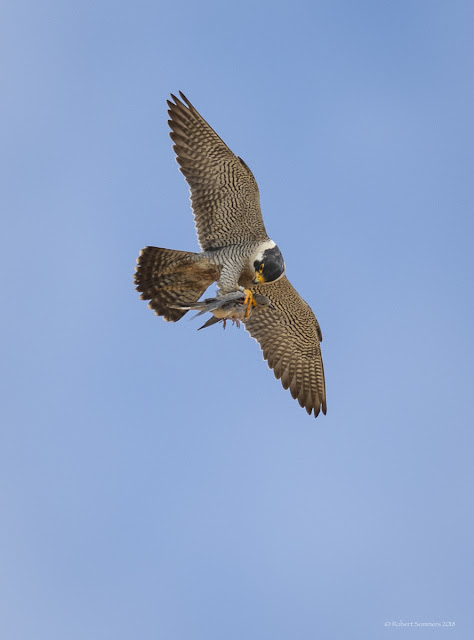 Watched a banded adult have supper late in the afternoon. The 400mm 2.8 e does a great job from the sand below, I am pleasantly surprised.

The next two shots are well over 300' away. That is the greatest advantage of large megapixel cameras, your ability to crop and be left with something usable. 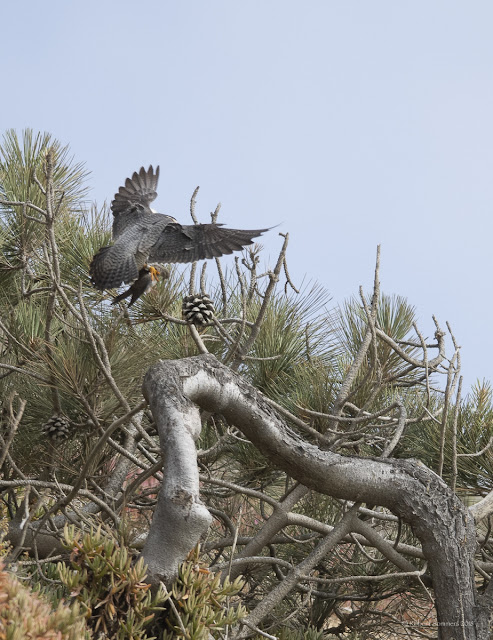 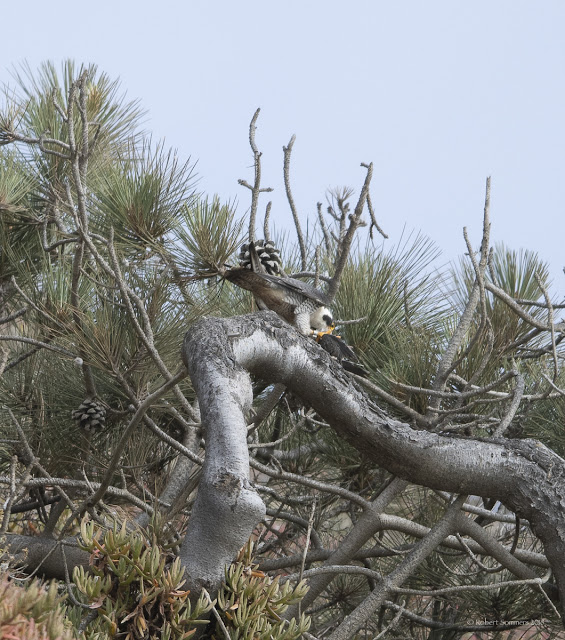 Look forward to returning soon and catching some group aerobatics and food exchanges from these magnificent creatures. With a little luck and practice the pictures should start looking better too. 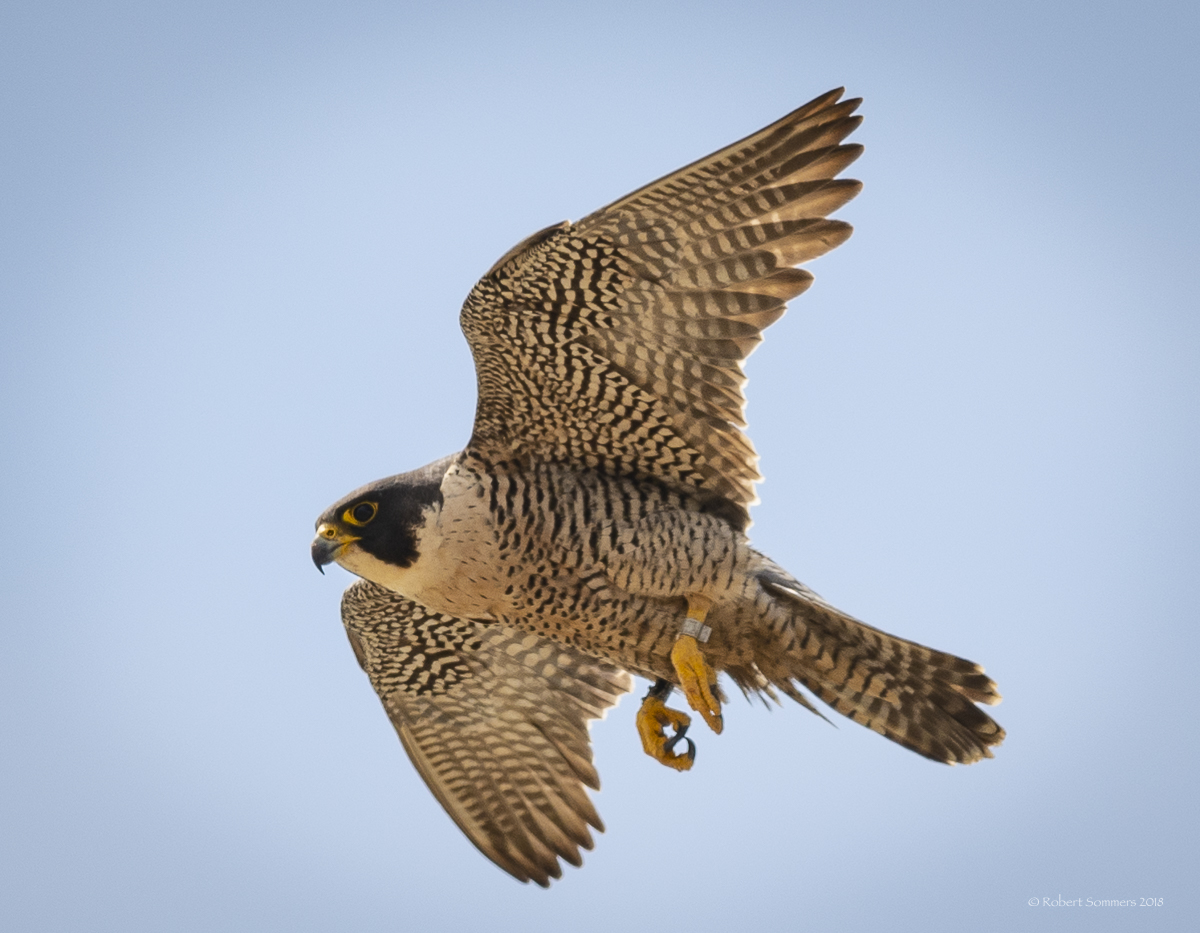 Looks like bird in last photo has a leg band.

Yes Mike,as I mentioned. Both adults are banded.

I love what you're doing here Robert! Superb work! Max