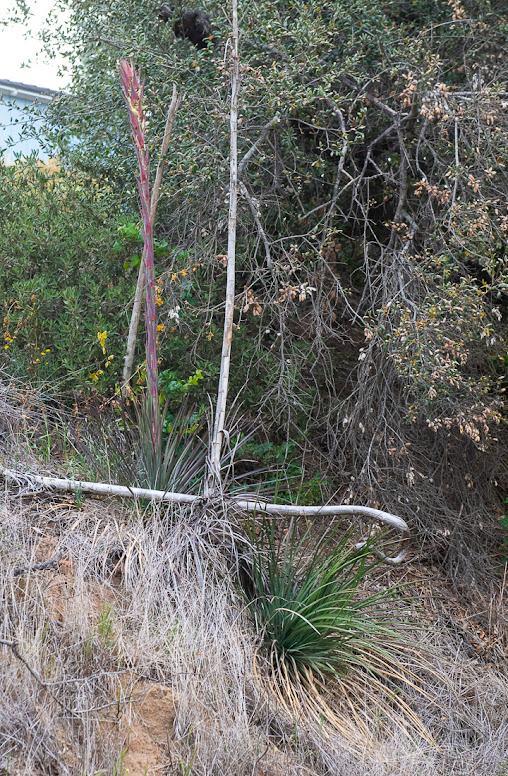 Since we have been on the subject of agaves and yuccas I thought I would post a picture of a chaparral yucca native to my area.
I shot this picture out of my car window on the way to work in the early morning.

This one is growing out of a bank around the hairpin corner next to my house.

They grow out of extremely dry and rugged banks on my road. Thrive on abuse. Incidentally, the natives have used it for years.

The botanical name for this plant is Yucca Whipplei or Hesperoyucca whipplei.

It is also known as Spanish bayonet or Spanish dagger. I got stabbed by one of these guys once when I was cutting wood as a kid and my leg looked a lot worse than Kerry's.

It was given the name "our lord's candle" on account of the lovely red color of the inflorescence sheath.

From Wikipedia: The taxonomy of Hesperoyucca whipplei is complex and controversial.Hesperoyucca was described as a genus by Georg Engelmann as long ago as 1892, but it has taken recent DNA analysis to confirm that they are genetically distinct from Yucca.

You will notice that it also has a beautiful burgundy colored sheath around its spike.

There are purportedly six subspecies of this plant and I wonder which one grows on the native banks of my Santa Margarita River? It is the wispiest yucca you could ever imagine.

More on the plant here:

It has been used extensively by Native Americans.[17] Yucca species such as the Yucca whipplei have been documented to have been used as a fiber and food source by Native Americans in the Southwest cultural region, prior to European settlement efforts.[18][19] Archaeological evidence show that use of yucca species extends to approximately 5000 years ago within groups such as the Serrano of the San Bernardino Mountains and San Gabriel Mountains of the transverse mountain ranges of Southern California.[20][21][22] The Serrano harvested the hearts of the plant during the spring growing season.[19] Yucca whipplei grows on the rocky slopes and washes of the chaparral area of the transverse mountains of Southern California up to approximately 4000 feet above mean sea level.[23] Harvested plants were chosen based on the growth of the stalk; the hearts were the preferred portion of the plant, and would be harvested before the stalk was fully developed. The heart contains the sugars stored to rapidly grow a stalk to flower, and become bitter as the stalk grows in height.[24] The hearts would then be roasted in stone lined pits (earth oven) over several hours in a manner similar to that of agave species. Once cooked, the hearts would be removed and allowed to cool before eating. Uneaten portions could be dried for storage.[24] Though slightly bitter, the stalk and flowers can be harvested and used as food sources as well. The stalks can be prepared roasted in a manner similar to the hearts, while the petals were often parboiled.[24]

The long leaves of species such as the Yucca whipplei are made of strong fibers which can be pounded and scraped to expose long threads which run the length of the leaf.[24][23] The leaves could be processed in many ways to remove the outer layer of leaf material which could be processed into threads and cords, used for basketry, blankets, and sandals.[19] Green leaves can be heated over coals or directly on flames to heat the leaves. Cooking the leaves removes some of the saponins and allows for easier scraping. Ethnographic accounts dating to 1938 describes the preparation of leaves for fibers as any one of the following: boiling or pit roasting of live leaves to be scraped clean or the pounding or soaking of dry leaves expose fibers.[20] Shells or stone scrapers were often employed to remove outer leaf material from the fibers.[20] Once exposed, these fibers were often soaked in water to soften fiber. The fibers could then be twisted into cordage, used as materials in a basket, or woven into sandals.[19]

I am reminded how much work it was to feed yourself and put a shirt to put on your back. ~ Diane O

Great point, absolutely. How long does it take to weave a pair of sandals out of yucca fiber?