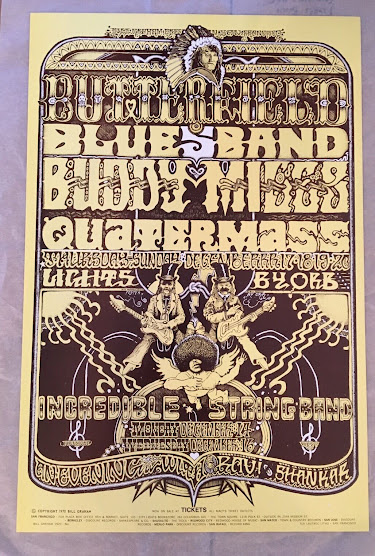 My buddy Stan is not only a great photographer and teacher of photography, he has spent a life in music. He played bass with the Incredible String Band, managed Janis Ian and Muddy, just has serious credibility on the subject.

And he was a roadie at the Fillmore East to boot. He got to see a lot of great music when the music was really good.

He sent me this letter the other day:

Last live concert I went to was four years ago…..

I don’t enjoy the experience anymore.  Even back in the days of ROADIE, I was always running around at shows.
I had a few memorable moments, while sitting in a seat…..
But considering the amount of shows I attended, this is really slim.
Elvin Jones trio at Slugs in 69…..
Little Feat at Venice something (small movie theater) in around 75,
Willy Dixon and the Chicago All Stars, (Somewhere in downtown LA in an old auditorium in a run down hotel….wooded seats, church ladies….May of 76
James Taylor at Berkeley Community Center…….1974 or 75
Stones farewell concerts at the Roundhouse, London,  Jan, 71
And the ultimate live experience for me:
New Years Eve 69-70, Band of Gypsies, Fillmore East.
All were somewhat intimate, the bands were killing it and you could see and hear.
STAN SCHNIER

I agree with him on one thing, I can't stand being packed in a room anymore and this goes back way before covid.

I like his picks. I never saw Elvin Jones live but he is probably my favorite drummer. I did see the Stones, Willie Dixon and Little Feat. Never saw Jimi or Janis, or Otis, unfortunately. Hard to trump Band Of Gypsies although I personally liked JME better, at least on the recordings. Big Mitch Mitchell fan.

I think I have listed some of these before but they are probably my favorite all time shows. Tough to pick, there were so many good ones. Hate leaving the great Dylan, Doc and Merle, Echo and the Bunnymen, Son Seals and Concrete Blonde shows off...

Taj Mahal - Catamaran. Small club, twenty minute impromptu a cappella back and forth with pretty blonde girl back row of the audience on Spoonful. Pure happiness.

Rolling Stones - Mick's birthday show, Madison Square Garden - 1972. Unbelievable, the show with Stevie Wonder and all the rose petals falling. Mick Taylor at his best. They made a movie that night.

Arthur Lee and Love - Belly Up Tavern The bitterest of Arthur, out of jail and just testifying. Unbelievably good.

Jefferson Airplane - House of Blues - Tribute to Papa John, with special guests Grace Slick, Merl Saunders and David La Flamme. Grace shows up at midnight and tears the place apart with her searing vocals. Leslie and I drinking shots with Jim Marshall at the bar.

Country Joe McDonald and Lee Michaels - Sports Arena - Nice to meet you, Mr. Orange Sunshine. ☀ And when exactly do you plan on going home?

What are your favorites?

Pink Floyd Animals/Wish you Were Here at Anaheim Stadium

Front row seats for Jackson Browne at The Actors Gang in LA, 2017 (venue holds about 100 people)

Springsteen and the E St Band at The Macauley Theater, Louisville, 1977