Today, all across America, white supremacists decided to march to address their perceived persecution and in the name of hatred. This week Tucker Carlson went on a tear about whites being replaced by minorities in this country. The battle lines are clearly drawn on this one. You get to pick one side or the other, America the melting pot or America First, the white supremacist edition. 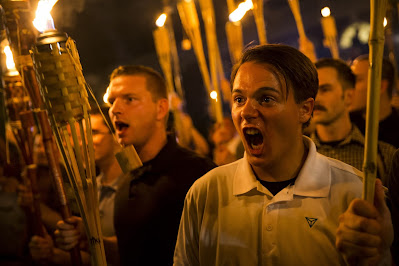 You can align with Carlson, Gaetz, Gohmert, Greene, King and Boebert and the rest of the hate squad or you can cast your allegiance to Martin Luther King, Rosa Parks, Eugene McCarthy, John Lennon and the voices of love. Don't think you can do both.

One of the cool things about the current political climate, besides the fact that Democrats hold the Senate, House and Presidency is that they don't really have to attack the GOP. The GOP is doing that themselves. I loved it yesterday when Trump called McConnell a son of a bitch again.

The Republicans have a big problem down in Florida and he is not going away, in fact it is only going to get worse I predict. The pressure on him to step away, surely being non electable in 2024 and the pressure on him to throw his hat in the ring again are about equal. His ego is so great I must assume the latter will occur.

So the Democrats would be smart to just sit on the sidelines and let them do each other in. Eat popcorn and enjoy the show.