I think there is something, well a bit "cockeyed" going on with my Google algorithm.

Somebody signed me up for a Match.com site that I think caters to like minded eligible young men. Sent me a bunch of pictures of eligible suitors. Nice gents but honestly, nothing really clicked. I have tried to unsubscribe three times but Match won't take no for an answer. Hey, no means no!

Thanks whomever, but it doesn't really puff the air up under my skirts. I thought maybe Cam was goofing on me but he says that he had nothing to do with it. Not that there is anything wrong with it, just not the way I happen to roll. But the algorithm won't stop trying to hook me up with a fresh guy. 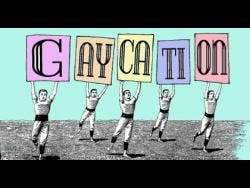 This morning I got a Google advertisement for a nice Gaycation.
Now that definitely sounds like a lot of fun but I have a lot on my plate right and unfortunately I am going to have to pass on that one too.

Google thinks I am gay and I am all right with that. Might even redecorate.

Maybe you can thank your troll for this bit of amusement.