I was taking a short stroll down memory lane with the guys at coffee the other morning when I asked them if they remembered the Big Chief Writing Tablet? Since these guys are pushing eighty for the most part I was surprised that they did not.

Because from kindergarten on for me, this was what we used to learn to write. At least through the second or third grade. 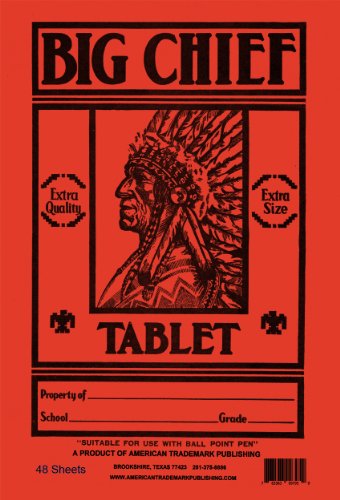 Consisting of forty to forty eight pages of low quality newsprint, the Big Chief started in 1906 and had a variety of similar but different cover illustrations through the years.
Quite iconic lettering, much like Hernando Villa's  famous illustration for the Santa Fe Railroad. Now I don't know but it wouldn't exactly surprise me if he illustrated some of these too.
Suppose that they couldn't even be printed in these days of political correctness. But that's neither here nor there.
What I remember the most about them was that the paper had these large wood chips in the pulp that you would have to steer around with your oversized pencil.
The Big Chief was doing just fine until the 1960's when it was done in by the newfangled spiral notebook.

I miss big red. Do you remember it? When I think of it I can't help but also remember the sweet and rather wholesome smell of library paste.

Why does it have a bar code on it?

Because it continues to be manufactured today, although in much smaller numbers, and this is a repop of an early variant. There were at least eight designs.

I remember them. I used them.

Yeah, I remember these from grade school (as it was called back then). Also Peach-ee folders with pockets later in Jr. high and high school. Ah, the '40's and 50's - a whole different way of living that youngsters have no clue about.

It might have been an East coast thing. In SoCal we had the cheap brownish paper with the wood chips but no Indian chief.

I was actually in California back then.

Well, maybe you went to school after me then, I am 75, Manhattan Beach native.

And maybe you forgot...

My sister keeps forwarding me ‘if you remember these, you’re really old’ emails. I usually do remember the stuff shown. So thanks for this one, which is totally unfamiliar and rather archaic looking! Puts a spring in my step ;)

Yes, we had them in Kansas, too :-) Not even Big Chief tablets could make my scribbling any easier to read.

I remember eating the paper

I do remember the Big Chief (and the wood chips), and I always have a phrase ready when technology fails..."sometimes the Big Chief tablet and a Ticonderoga #2 are the way to go".