My friends and readers know that I have had a long interest in history, genetics and ancestry. There is a thought provoking article on the subject in last week's New Yorker called The Skeleton Lake which I think is worth a read. A real mystery and apparently a subject of a heated debate between genetics types and anthropologists.

I linked to the article on a genetics website that I sometimes frequent, Double Helix, and a responder said that he was actually related to some of the samples found at the Skeleton Lake site. I sort of reflexively scoffed and asked him for more information and he told me about a new site, My True Ancestry.

My True Ancestry doesn't take you the normal route of matching you with present day relatives, it matches you to ancient samples unearthed in digs. Some people question its credibility but I am trying to go in with an open mind and solely look at the data they provide and consider it objectively.

If you have been tested at other sites you can forward your files to the company for free and get a preliminary read that times out in a little over two days. After that you have to pay to play and get more information.

I am certainly not an expert on the site but my initial results are certainly intriguing. Not only do I also have links to the Skeleton site, I have match results back to the Iron Age, the Achaemenid Empire in Saifi Lebanon in 500 b.c..

I don't know a lot about the Achaemenid Empire but I intend to find out. Persians, the largest empire that had ever existed prior to that time.

Here is my general breakdown; 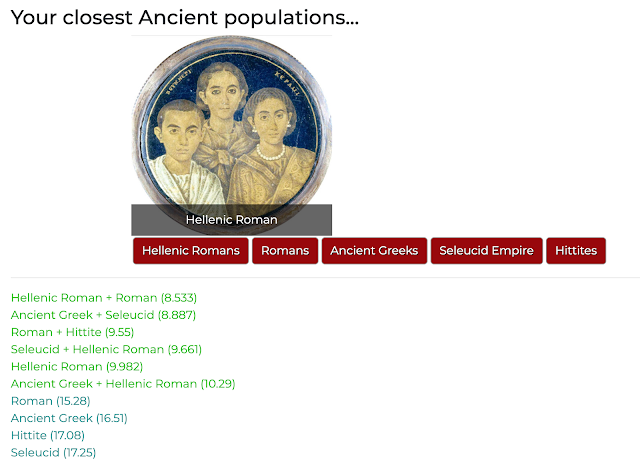 There are a lot of things I have to study here but all leads point to a diasporic jewish tribe in long periods of slavery and servitude. So who were the Seleucids you might ask, my largest match of potential former slave owners? They took over from the Achaemenids and grabbed the local real estate, which is the general birthplace of my particular branch of my genetic line, the area of Canaan, Israel and Judea.
From the site: Following the death of Alexander the Great, the Macedonian Empire was divided. Alexander's infantry general Seleucus I Nicator founded the Seleucid Empire which included much of Alexander's near eastern territories. At the peak, this included central Anatolia, Persia, the Levant, Mesopotamia, Kuwait, Afghanistan and parts of Pakistan and Turkmenistan. The Seleucid Empire was a major center of Hellenistic culture and maintained Greek customs with a Greek elite dominating urban areas. The cities were populated by Greeks who re-enforced large scale immigration from Greece. The Empire tried to expand further but was thwarted by the Roman Republic and its Greek allies leading to defeat at the Battle of Magnesia. The Seleucids were forced to pay costly war reparations and give up territories west of the Taurus Mountains. The Seleucid kings continued to rule until invasion by the Armenian king Tigranes the Great in 83 BC and their ultimate overthrow by the famous Roman general Pompey in 63 BC.

Looks like we had an early run as Greek slaves. And an even earlier run indentured with the Hittites, an Anatolian people who established an empire in the neighborhood that included the Levant around 1600 b.c.

These are the Roman age samples I match to most closely:

Here are the matches from the Dark Age samples:

There has long been a question about where the people known as the Ashkenazi went from the time of the dispersion to the time they reached Poland in the twelfth century, this might provide some rock solid leads. Rome, Crete, Calabria, Sardinia, a definite Italian and Mediterranean proclivity. By the way, the Dodecanese are a group of islands off Greece that include Rhodes.

The only Medieval period record I can access with my membership is also from Italy, from Foggia:

The early Modern period takes my ancestry to Andalucia and southern Spain.

My only two Modern period matches are in fact from Skeleton Lake. I am not absolutely sure about this information and it will require further study but it looks very promising. This site allows you to see the other member's haplogroups and my matches are all E Y6923 like I am, a solidly Ashkenazi branch.

This website might really fill some holes in my knowledge of my personal puzzle. If you have tested with any of the major DNA companies you might migrate your data over and see what you find. I sent my info over from Ancestry and it was a cinch. I ended paying $25 so I could have a permanent link and will let you know if I go any farther.

I read a critical review of this website that bears mentioning and should be factored into your thinking.

"The primary focus of MyTrueAncestry is uncovering users’ ancestral links to historical populations. The site has a deep FAQ section. It claims that it’s algorithms compare users’ DNA to “a wide variety of Ancient DNA samples.” These samples are found in academic databases around the world, many dating back to historical archaeological dig sites. The MyTrueAncestry.com DNA ancestry test uses those reference populations to connect modern-day humans to ancient civilizations. This method of analysis leads to questions concerning MyTrueHeritage accuracy. Sites like 23andMe and Ancestry use real “reference populations” to determine ancestry. The archaeological historical record may only come from a single individual, lowering the changes of receiving an accurate match. With only a single reference point, it is hard to know whether a genetic variant is related to the specific population or if the gene was present before that."

Fascinating stuff. What an exotic story from the lake. The most interesting part to me is the relationship to understanding more about the history of the diaspora. I am not clear how a group from the 17th or 18th century shows more about the transition from the Seleucid Empire’s time to the 12th century movement of of people into Western Europe that were/became the Ashkenazi. Could you comment? And what do you think of the Armenian hypothesis?

The skeleton lake business is a non sequiter and there is no real nexxus to the diaspora story. We clearly do not know what was occurring there. The earlier data finds are the most intriguing to me and point to long periods of probable servitude, Roman, Aechmenid, Hellenic, Persian and elsewhere.

I'm reminded of the image you shared earlier this year of you with a greco roman physique pushing a boulder. It seems to reflect your ancestry well after reading this post. JH

Really fascinating. Thanks for the links