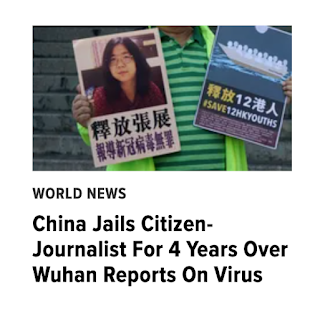 People like to bash the media but courageous journalists the world over are raising people's awareness of the damage to human rights caused by repressive regimes. And many of them are suffering mightily for it, doing long prison stretches and sometimes losing their lives in the process.

In its annual global survey, the Committee to Protect Journalists found at least 274 journalists in jail in relation to their work on December 1, 2020, exceeding the high of 272 in 2016. China, which arrested several journalists for their coverage of the pandemic, was the world’s worst jailer for the second year in a row. It was followed by Turkey, which continues to try journalists free on parole and arrest new ones; Egypt, which went to great lengths to keep custody of journalists not convicted of any crime; and Saudi Arabia. Countries where the number of jailed journalists rose significantly include Belarus, where mass protests have ensued over the disputed re-election of the long-time president, and Ethiopia, where political unrest has degenerated into armed conflict.

This marks the fifth consecutive year that repressive governments have imprisoned at least 250 journalists. Lack of global leadership on democratic values – particularly from the United States, where President Donald Trump has inexhaustibly denigrated the press and cozied up to dictators such as Egyptian President Abdelfattah el-Sisi – has perpetuated the crisis. As authoritarians leveraged Trump’s “fake news” rhetoric to justify their actions – particularly in Egypt – the number of journalists jailed on “false news” charges steadily increased. This year, 34 journalists were jailed for “false news,” compared with 31 last year.

Consider the personal danger these people and activists the world over submit themselves to on a daily basis while doing their job. We owe them a heck of a lot.

Not like they are doing it for the money.

The unfortunate thing is that many of these countries are our supposed friends and allies.
In Honduras,  journalist David Romero – director of Radio Globo and Globo TV, died of Covid last July while serving a 10-year sentence for defaming a former prosecutor.
International Press Freedom Awardee Azimjon Askarov also died in prison this year, after years of campaigning for Kyrgyz authorities to release him by the U.N. Human Rights Committee, CPJ, and other advocacy groups. Askarov was sentenced to life on fabricated charges, in retaliation for his exposure of police abuses. His wife suspects it was Covid but the prison refused to test him.
In Egypt, Al Jazeera journalist Mahmoud Hussein has been illegally imprisoned by Egyptian authorities since December 23, 2016. The details of his arrest are unclear – there are no formal charges nor was there ever any trial. He has been imprisoned for over four years.
There have been at least fourteen journalists murdered in Russia during Putin's reign.

Next time you decide to bash the press, consider what the world would be like without them and what they are protecting you from.
And don't think that we are immune here in the United States. Also from CPJ:

Within the United States, no journalists were jailed at the time of CPJ’s prison census, but an unprecedented 110 journalists were arrested or criminally charged in 2020 and around 300 were assaulted, the majority by law enforcement, according to the U.S. Press Freedom Tracker. At least 12 still face criminal charges, some of which carry jail terms. Observers told CPJ that the polarized political climate, militarized law enforcement, and vitriol toward the media combined during a wave of protests to eradicate norms that once afforded journalists police protection.