It's very sad to read that four of the deadliest days in American history occurred only last week, cumulatively exceeding any death toll we have ever witnessed as a country in such a short span. One day totals are pushing the deadliest days of the Civil War and have already exceeded the casualties at Pearl Harbor. 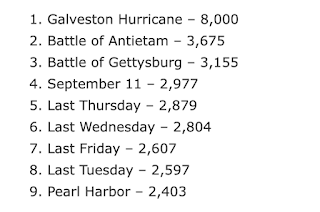 And things are probably going to get a lot worse.

And yet the administration seems to be so blasé about the whole affair. Secretary of State Mike Pompeo still hosts huge and lavish State Department Holiday parties where attendees go largely maskless and are seemingly ignorant of social distancing protocol.

There seems to be such a disconnect at the human suffering caused by this microbe in the Trump Administration and it is quite odd when you consider just how many people in the Trump inner circle, cabinet and administration have come down with Covid 19, including the President and his family.

Of course, if you are a Trump or a Rudy Giuliani, or anybody else high up enough in the autocratic orbit, you are treated with a very special drug regimen, a monoclonal antibody developed by Eli Lilly and a cocktail of two monoclonal antibodies developed by Regeneron that we mere mortals would never dream of getting. Rudy doesn't think covid is even a very big deal at this point.

Doesn't seem quite fair that we the people die and our overlords skate but I guess life is not really fair, is it?

Not sure your chart includes:

The flu pandemic in 1918. Exact daily death counts from the 1918 pandemic are not available, but the CDC estimates that in October 1918 alone, roughly 195,000 people died from the virus. That comes to an average 6,300 deaths per day and it’s likely the peak numbers were higher.

The Civil War Battle of Gettysburg. The fight lasted three days with an estimated casualty number of 10,000. Estimates say the deadliest day of combat likely saw upwards of 3,000 deaths.

The San Francisco Earthquake of 1906 is estimated to have resulted in 3,000 deaths.

[Taken from the fact-checker site: Verify].

Nevertheless, your point is well taken despite these omissions... COVID deaths are going up!

Focusing on who’s fault it is... well, is tiring and unproductive. If the state’s have the responsibility to direct citizens / municipalities and county government preventive action... why is that (once again) Trump’s fault? Was it the federal government or governors [CA, NJ, NY, PA, MI] that directed nursing homes to accept infected patents, resulting in 10’s of thousands of unnecessary deaths? And Congressional leadership can’t pass a house bill without politicking every freakin decision that just might help the citizens they represent.

Let’s focus on what’s next... getting a solid vaccine across the finish line, coordinating vaccine priority / disruption, passing a relief bill that isn’t full of crap, learning from good or mistaken fed, state and local policies, and stop spring-butting on who to blame, but on how to help.

I never said anyone was to blame I merely pointed out the foolishness of maskless state department dinners and the sad fact that people at the top of the political food chain have access to medicine that the rest of us don't. So Rudy and Trump's protestations that the disease isn't that big of a deal run hollow. Will have to follow up on your mortality stat totals, mine were supposedly vetted but interesting points that I need to fact check.

Perhaps the scariest thing is that lots of people are dropping dead with this thing and it seems inexorable. When vaccinations start the process will take quite a while to reach those who need to be reached. I am seeing estimates that anyone who wants to get vaccinated should be able to by MAY.

Meanwhile as the Trump election denial psychosis grips some 40% of the country I would not be at all surprised to see a conspiracy theory emerge that says the vaccine is a mind control agent being pushed by Democrats to make the country accept Democrat tyranny. Bullshit like that added to the vaccine fears already active could really slow down the process of protecting public health.