The Nashville bombing story is both horrible and surreal, almost dadaist. The Petula Clark music, now the lizard people tie in. 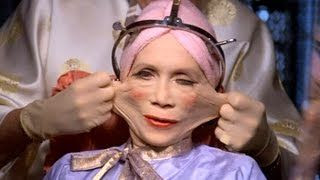 It makes me feel like we are living in a scene from the movie Brazil. Very dystopian.
Bedrock truth and normalcy seems to have vanished, people perfectly content to surrender to all sorts of half baked delusions.
What are the lizard people you might ask? According to reports, the bomber may have been suffering from a delusion that alien reptiles are now running the show on old terra firma. Seriously? Unfortunately, yes.

Investigators are exploring several conspiracy theories as potential motives behind the Christmas Day bombing outside an AT&T building in Nashville, including evidence that the bomber believed in lizard people and a so-called reptilian conspiracy, two senior law enforcement officials told NBC News on Wednesday.
Since Saturday, authorities have been probing Warner’s digital devices — which one official says includes a significant trove of pictures, videos and writings — looking for any clues on what drove the man to set off a powerful bomb inside his recreational vehicle that took down communications networks and injured several people in downtown Nashville.
Specifically, investigators are looking into the suspect’s previous trips to an undisclosed location in Tennessee where he would camp out in his R.V. and according to the suspect’s statements to others, hunt possible aliens, the officials said.
In addition, investigators are aware of statements the suspect made about an internet conspiracy that powerful politicians and Hollywood figures are actually lizards or other reptiles who have extraterrestrial origins and are taking over society, the officials said. 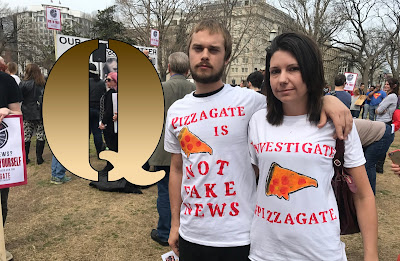 This apple does not fall too far from the Qanon tree, the Info Wars type palaver that have democrats sucking the blood from christian babies at a bunch of pizza parlors and creating hoax shootings at schools like Sandy Hook.

You throw the crap out there and I tell you, some fool will believe it, no matter how farfetched. And some cynical politician will find a way to profit from it. Goes back to the fake Protocols of the Elders of Zion.

Our collective intelligence is missing some essential component of the ability to separate fact from fiction. Critical thinking has to be at its nadir. Hence you get a sizable minority of the country believing that an election is stolen from a President without a scintilla of evidence while all the downballot GOP members were somehow still mysteriously elected.

I was accosted last month by a woman who went off on the fourteen families of globalists, basically how the Rothschilds and Soros and "those people" are really running the show. Where the hell was my invitation? Or did the Lizard People run off with it?

It’s like the Flat Earth people: they believe because they want to believe in something that makes them special.

Hummmmmmmmmmmm...Men in Black? If you have not read it, I suggest: Four Arguments for the Elimination of Television by Jerry Mander. A book published in 1978.

One of the thoughts that took me was his concept of TV time vs Natures Time. TV has compressed time.

History of the West in Seven Sentences

Berlin Wall falls. Now capitalism has "won" so lets go for it totally. Globalization goes into full speed as capitalism realizes it no longer has to care about labor since there is plenty of labor in Shanghai.

Working stiffs notice that the businesses in their town are gone as are about half of the jobs. Distrust festers.

Globalization leads to a new "roaring twenties" for the well heeled and a new poverty and hopelessness for everyone else. The hopeless search for any solution to their dilemma finding hope with demagogues.

IMHO far too many people underestimate just how viscerally gripping and powerful a good story with a powerful narrative can be. Long before there were schools or classes, and before the concept of history as an objective accounting, there were stories.

The conceit of the story is that within the context of the story, which may or may not have some relationship with objective reality, everything is true. That's how stories work. Intergalactic space travel and teleportation are not part of our reality but, for the purposes of watching Star Trek, we suspend disbelief and go along with it. For the sake of the story, and our entertainment we set aside logic and reason.

It is the advent of 'infotainment' and media framing from advertising that causes problems. The tobacco companies wanted to sell more cigarettes so they framed smoking as sophisticated and stylish for women. They spent a lot of money to create that story and profited from it in return. They took a minority opinion from a few doctors about how menthol might in some minor way stabilize some breathing problems and propped it up as a major scientific breakthrough and the medical consensus. They spent a lot of money to create the story and back it, and they profited handsomely.

They convinced a majority of men at one time to smoke. The power of stories got a majority of Americans to take a not inexpensive toxic material, set fire to it, and inhale the smoke. And convinced they that it was good for them and they looked cool doing it.

Is it any wonder that they power of stories has a third of the population convinced that Q-anon is real. That lizard-people live among us. That Trump won the election in a landslide.

You got me, Aferda. What will we know tomorrow? That we share the planet with a bunch of alien reptiles that masquerade as humans and hang out in front of coffee shops and talk about chevy motors? Happy New Year!

You hit the nail on the head when you mentioned 'critical thinking'. I like science fiction and Lord of the Rings but I'm able to separate fact from fiction. I'm a natural sceptic, a doubter, I have built in critical thinking. Apparently some folks need to take a Critical Thinking course at their local junior college to recalibrate their built-in bullshit detectors. By the way, right-wingers aren't the only ones living in a fantasy word. We have Aquarian friends in common who believe in astrology, that EMF causes cancer, that contrails are actually 'chemtrails', etc., etc.

hey happy new year to all, still have tons to be blessed and be thankful for !!!!!!